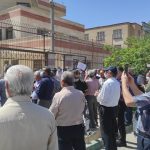 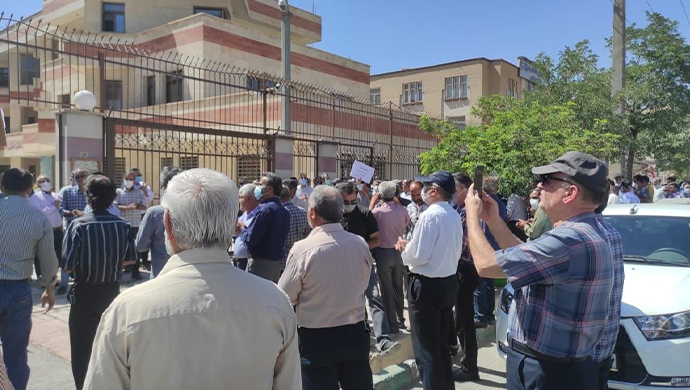 On Saturday, July 16, Social Security Organization retirees and pensioners once more took to the streets to protest the regime’s corruption, embezzlement, destructive policies, and refusal to meet their unmet demands regarding an array of economic woes, including low wages and pensions, rising inflation, skyrocketing prices of basic goods, insurance problems, and subpar living conditions.

Ahvaz, Isfahan, Karaj, Tabriz, Arak, Babol, Kermanshah, and other cities all reported protests. With the economy in freefall, retirees and pensioners have been holding regular and ongoing rallies. These demonstrations are an extension of the protests that began on July 13th.

The first time was in June when the retirees and Social Security Organization pensioners held a series of consecutive days of protest after previously holding weekly demonstrations. Despite the regime’s strict security measures, these gatherings went on for almost two weeks. The Ahvaz pensioners criticized the destructive policies of the regime.

July 16 – Ahvaz, southwest #Iran
Pensioners of the Social Security Organization protesting and calling on the regime to respond to their demands.
They're criticizing the regime's destructive policies and corruption.#IranProtestspic.twitter.com/5IOENK3kxn

Retirees are entitled to a 38 percent increase in their pensions, according to a statement made by the regime’s own Labor Council, as a result of various economic factors, such as the rising inflation rate, and the devaluation of the rial, and the skyrocketing prices of essential goods. However, the regime has only thus far approved a 10% increase in pensions, which is insufficient to meet pensioners’ essential needs.

Pensioners and retirees in Isfahan, central Iran, chanted slogans accusing the government of stealing their money. Immediately after taking office in August 2021, regime President Ebrahim Raisi made audacious promises to end poverty and boost the nation’s economy. People from all walks of life are protesting across Iran less than a year into his presidency, and the economic situation is worse than it has ever been. At the same time, the parliament is holding off on approving the necessary legislation to take care of retirees’ needs.

July 16 – Isfahan, central #Iran
Pensioners of the Social Security Organization protesting and calling on the regime to respond to their demands.
They're accusing regime officials of stealing their money.#IranProtestspic.twitter.com/Z4FxdTKM3G

Regime institutions and bodies have been continuously stealing from the retirement fund, which is meant to pay retirees’ pensions. The regime is dealing with a widening budget deficit as it continues to pour money into supporting regional terrorism and its pursuit of nuclear weapons. It has paid off its budget deficit by taking money out of the retirement fund, raising taxes, and taking money from the weaker members of society.

The regime continues to support its military and terror apparatus while depriving pensioners, business owners, employees, drivers, teachers, and other facets of the society of their most fundamental needs. It does this by funneling billions of dollars into the pockets of the Revolutionary Guards and its terrorist allies in the area as well as massive sums on the development and testing of ballistic missiles.