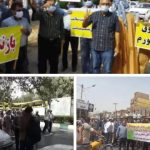 Written by Mohsen Aboutalebi on June 20, 2022. Posted in NEWS 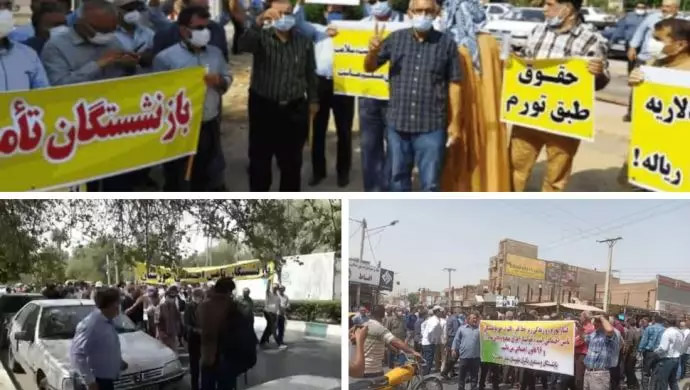 The retirees and Social Security Organization pensioners have previously held weekly rallies, but this is the first time they have gathered for several days in a row. Despite the regime’s heavy security measures, the protests continue.

On Wednesday, June 15, Social Security retirees and pensioners took to the streets for the ninth day in a row to protest the government’s destructive policies and lack of response to their unmet demands regarding low wages and pensions, insurance issues, and poor living conditions. Tehran, Ahvaz, Dorud, Kermanshah, Shush, and other cities have reported protests. Retirees and pensioners have been staging regular protests as their living conditions worsen due to the deteriorating economy, rising inflation, and skyrocketing prices of food staples such as bread, milk, dairy products, eggs, poultry, and cooking oil.

Pensioners in Ahvaz were holding signs that read, “the council’s decision must be carried out.” This is a reference to a statement issued by the regime’s own Labor Council, which claims that retirees are entitled to a 38% increase in their pensions due to a variety of economic factors, including rising inflation, rial depreciation, and skyrocketing prices of basic goods. However, the regime has only approved a 10% increase in pensions so far, which is insufficient to meet the basic needs of retirees.

The demonstrators also called the state-owned broadcasting company a “disgrace” for censoring news about their protests. “We will fight and die to reclaim our rights,” the demonstrators chanted.

Despite the regime’s heavy security measures, retirees held a large rally in Tehran. Security forces who attempted to disperse the rally were yelled “Shame on you” by the demonstrators.

“Enough with the tyranny,” protesters in Dorud chanted. “Our tables are empty.”

Raisi made bold promises to eradicate poverty and improve the country’s economic situation after taking office in August 2021. The economic situation in Iran is worse than it has ever been less than a year into his presidency, and people from all walks of life are protesting across the country.

The pension fund, which is supposed to pay retirees’ pensions, has been looted on a regular basis by regime institutions and bodies. The regime is facing a growing budget deficit as it continues to spend its wealth on fighting terrorism in the region and pursuing nuclear weapons dreams. It has made up for the budget deficit by raiding the retirement fund, raising taxes, and taking money from the poorest members of society.

At the same time, shopkeepers in several cities’ bazaars continued strike action that began earlier this week. Arak, Kazerun, Minab, Isfahan, Tehran, Naghadeh, Khorramabad, Borujerd, Fasa, Ilam, and other cities have reported strikes in recent days. The shopkeepers are protesting the regime’s tax hike policy as well as the rial’s declining value, which hit a new low this week, trading at over 330,000 to the US dollar.

Long stretches of streets in Khorramabad and Naghadeh were marked by closed shops. Protests in Fasa started in the “Old Bazaar,” where shop owners split into two groups and marched toward Taleghani and Imam streets.

“Proud merchants, support us!” chanted the protesters as they closed their shops and joined the rally.

Shop owners in Ilam staged a large rally in front of the tax offices to protest the regime’s tyrannical policies.

The regime continues to fund its military and terror apparatus, funneling billions of dollars into the coffers of the Revolutionary Guards and its terrorist proxies in the region, and spending massive amounts on developing and testing ballistic missiles, while pensioners, shop owners, workers, drivers, teachers, and other sectors of society are deprived of their most basic needs.