Ali Khamenei, the regime’s supreme leader, expressed his utter fear of the escalating unrest in Iranian society in a meeting with the head and senior judiciary officials, and he called for an all-out crackdown on protests and social media. The regime is currently having difficulty quelling a wave of protests that are spreading across the nation, which coincides with Khamenei’s most recent speech. Every day, people from all walks of life take to the streets to express their outrage over economic hardships, governmental corruption, the detention of activists, and the restriction of freedoms.

Simultaneously, the Iranian Resistance has made significant progress within the country. The People’s Mojahedin of Iran (PMOI/MEK) affiliated network of activists known as the Resistance Units has been conducting numerous campaigns all over the nation to stop the regime’s repression apparatus from silencing the voices of dissent and defiance.

Thousands of dissidents—mostly MEK members and supporters—were imprisoned, tortured, and killed at the time as a result of the regime’s brutal wave of repression. When the regime executed more than 30,000 political prisoners in a short period of time in the summer of 1988, the bloodshed came to a head. The majority of the victims were MEK supporters and members.

By asking, “Which government and country do you know of that does not collapse due to such bitter, dire events,” Khamenei desperately tried to reassure his supporters that his regime is still strong and standing. Khamenei then added, “The enemy cannot understand that in this world, apart from political calculations, there are other calculations as well. These are the divine traditions.” 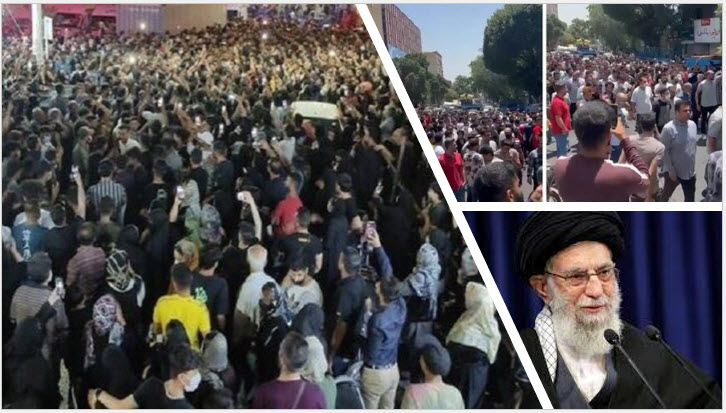 Khamenei could not hide his fear of the state of Iran even as he pleaded for divine intervention to save his regime.

By upholding one of the divine traditions, namely jihad and resistance, the Iranian nation was able to frustrate the enemy in 1981, according to Khamenei. “The same rule and law are still in effect today, and God is still the same God He was in 1981. We must apply ourselves to be an example of the divine traditions so that the outcome will be progress and victory.” Essentially, Khamenei is calling on the judiciary to revert to the same reign of terror that the regime used in the 1980s to suppress Iran’s growing voice of dissent. It was all done in the name of God.

Khamenei also expressed his concerns about the role that social media and online services are playing in assisting protesters in organizing and disseminating information about uprisings both domestically and abroad.

“Psychological security is one of the rights of the people. What do I mean by psychological security? It means that every day, a rumor, a lie, a panic-causing word is instilled in the minds of the people. Until yesterday, it was only the newspapers that were doing this. Now, cyberspace has been added. Every once in a while, every few days, and sometimes even every few hours, a rumor, a lie, something is published on social media by a known or an unknown person.

They cause worry among the people. They disturb people’s minds. They spread a lie and destroy psychological security. The Judiciary Branch must prevent the minds of the people from becoming worried and disturbed due to rumors, false claims, and the frightening statements of specific or unknown individuals in both the media and on the internet,” Khamenei said, admitting to his regime’s utter defeat in preventing the news of protests and regime corruption from spreading on the internet.

For many years, Khamenei has demanded that all internet access be completely restricted. But because of the difficulties it creates for the regime’s economy and the consequences it will have on society, his government has been unable to fully implement it.The people of Iran are expressing their true feelings by chanting “Death to Khamenei” and “Death to Raisi” on the streets while Khamenei continues to spread false hopes of power, might, and divine intervention to save his regime.