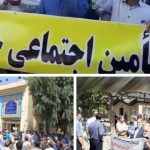 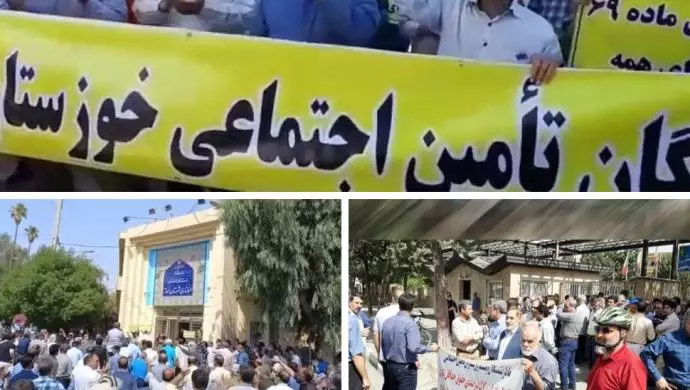 “While Raisi was celebrating his first year in office, protesters across the country were chanting, “Raisi, you liar!” “Where did your promises go?”

“The people wanted us to fight poverty, corruption, and discrimination,” regime president Ebrahim Raisi said to a group of regime loyalists in Varamin on June 18, the anniversary of the sham presidential elections of 2021. In the same speech, he claimed, “We remain loyal to our commitments.

Despite the heavy presence of security forces in Tehran, protests were held in five different locations, with protesters chanting slogans against the Raisi government’s destructive policies. Strikes and protest rallies were held by shop owners in Kashani, Ekbatan, Cheragh Bargh, Melat, and the appliance bazaar. Anti-riot forces were dispatched by the regime to intimidate the people and disperse the rallies. People, on the other hand, stood up to the security forces and continued their rallies.

At the same time, Social Security Organization retirees and pensioners continued their protest rallies in Tehran, Ahvaz, Bandar Abbas, Kerman, Dorud, Abadan, Shushtar, Shush, and Zanzan, which had been going on for two weeks. Demonstrators were protesting the regime’s destructive policies and refusal to increase their pensions in line with rising inflation and skyrocketing basic goods prices.

In protest of rising taxes and the falling value of the rial, bazaar strikes continued in Tehran, Yazd, Isfahan, Nurabad, and Kuhchenar. People from all walks of life joined the protest rally of shop owners in Isfahan.

These demonstrations follow two months of nationwide demonstrations across Iran. Protests erupted across the country in April as the cost of basic goods reached new highs. Protesters chanted “Death to Raisi!” and “Death to Khamenei!” at the regime’s President and Supreme Leader Ali Khamenei, respectively, and the regime’s crackdown on their rallies was met with a raid on the Bassij repressive forces’ headquarters.

Following these protests, a new wave of protests broke out in Khuzestan and neighboring provinces in response to the collapse of the Abadan Metropol building. Protesters chanted slogans condemning Khamenei, Raisi, and other senior regime officials for their role in creating the corrupt system that resulted in the building collapsing and killing dozens of people.

The regime’s security apparatus and repressive forces failed to stop protesters from taking to the streets for several days in a row once again. The nationwide demonstrations of retirees have now been going on for two weeks, and while they began with economic demands, according to regime officials and state media, we are now seeing political slogans and criticism directed at the mullahs’ regime’s very top.

The evolution of this trend to numerous demonstrations in Tehran and other cities, as well as the expansion of strikes on June 18, suggests that Iran’s protests have entered a new phase. The status quo is, to put it mildly, dangerous for the regime, but crucial for the Iranian people and their organized resistance on the road ahead.

The main feature of this period is the unification of an enslaved nation based on a shared dilemma that affects all of Iran’s communities, nationalities, and generations. The mullahs’ ongoing crackdown, crimes, and plundering have affected all aspects of Iranian society. When a society comes together to address a problem, they are more likely to find a common solution.

This is why, despite the large number of units dispatched to quell recent protests, the regime’s crackdown machine has been unable to prevent the growth of popular protests over the past two months.