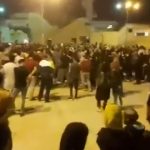 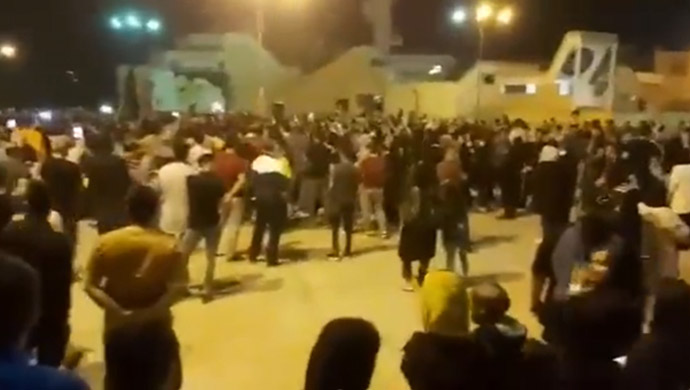 People in different cities of Iran took to the streets again on Tuesday night, May 31, in solidarity with the people of Abadan, southwest Iran, in mourning after the Metropol tower collapse on May 23 – Image from Fuladshahr, Isfahan province, central Iran – May 31, 2022

On Tuesday, May 31, people in a number of cities took to the streets against the Iranian leadership for the seventh night in a row, as anti-regime protests spread across the country. These protests are being led by Abadan residents in memory of the at least 36 people killed when the city’s ten-story Metropol tower collapsed on May 23. Others were injured, according to reports, and dozens are still believed to be trapped beneath the rubble.

Shadegan, in Khuzestan province, and Fuladshahr, in Isfahan province, central Iran, joined the latest wave of demonstrations and protests against the mullahs’ regime on Tuesday, shoulder to shoulder with Abadan and other cities that have been protesting for the past week.

For the sixth night in a row, anti-regime protests erupted in several cities across Iran on Monday night, May 30. People took to the streets in solidarity with the people of Abadan in the cities of Abadan, Shadegan, and Izeh in Khuzestan province, Bushehr in Hormozgan province, Tehran, Zavareh in Isfahan province, and Kazerun in Fars province, as per activists.

May 31 – Abadan, southwest #Iran
Locals have taken to the streets against as anti-regime protests continue for a 7th consecutive night following the May 23 collapse of the 10-story Metropol tower that left at least 36 dead.#IranProtests pic.twitter.com/u3l2MvTBdY

On Monday, soccer fans in Tehran’s Azadi Stadium were celebrating their team’s victory in the Iranian football league when they began chanting “Abadan! Abadan!” in solidarity with the people of the southwest Iranian city. Security forces from the regime attacked locals who were holding a gathering in the capital’s southern district.

For the fifth night in a row, people took to the streets on Sunday. Anti-regime demonstrations took place in Abadan, Masjed Soleyman, and Kazerun. In solidarity with the people of Abadan, people in these cities held rallies. Authorities are reportedly disrupting internet access in Khuzestan and other provinces. Anti-riot units were dispatched to the city theater in Tehran to prevent residents from holding a vigil in solidarity with the people of Abadan.

May 31 – Fuladshahr, central #Iran
Locals have launched anti-regime protests in solidarity with Abadan.#IranProtestspic.twitter.com/DRjupS9EMY

Locals in Abadan also booed and disrupted a gathering of regime officials and security forces, chanting:“I will kill those who killed my brother!” “We are ready for war and will fight to the end!” “Shame on you!” “Basiji, get lost!” referring to members of the regime’s Revolutionary Guards (IRGC) Basij forces. Similar protests took place in Tehran, Shahr-e Rey, Andimeshk, Behbahan, Qom, Minoo Island, and Susangerd on Saturday night.

Security forces also forced stores to close, detaining and transporting their owners to unknown locations. Despite the regime’s harsh measures, residents in Tehran held a vigil for the people of Abadan and rallied, chanting “Death to the dictator!” in reference to the regime’s Supreme Leader Ali Khamenei.

The widespread protests began with the collapse of the Metropol tower and quickly expanded to include the entire regime, particularly senior officials such as Khamenei and regime President Ebrahim Raisi.

May 30 – Tehran, #Iran
Regime security forces in a southern district of the Iranian capital are seen attacking a group of locals as they hold anti-regime rallies.#IranProtests pic.twitter.com/oJFB84gImr