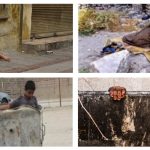 Iran’s economy is on the verge of collapsing. The Iranian regime is facing major political obstacles as a result of the country’s economic crises, which have reached a point beyond repair. Problems are becoming more prevalent, congested, and incurable. Therefore, the regime will face new social upheavals, this time led by hungry people. According to the regime’s media, this situation is the result of “expanding government influence over the past four decades.”

“Officials are aware of the social ills, but their strategy is to take advantage of the country’s impoverished situation,” the state-run daily Jahan-e Sanat wrote recently. “For government officials, the people’s poverty is a divine gift. Powerful people are also the ones holding the country hostage.”This crisis began with the suppression of freedom and has now spread to the people’s livelihood. Even Iran’s state media has admitted that “poverty” is a “policy” to keep the regime stable.

“The people’s impoverishment, the politicization of poverty, and the expansion of government influence have been pursued for the past four decades,” Jahan-e Sanat continued. Simultaneously, poverty has spread and people’s daily struggles have grown to the point where they no longer have the opportunity to study and critique the government’s performance.” This situation reminds me of the claim that “when social crises reach their limits, rulers will have no way forward and no solution to the crises, even if they want to.”

The authors of the regime’s politics and economics are the primary cause of the crisis’s escalation. “The government is slaughtering the economy instead of surgery,” Jahan-e Sanat admitted, adding that “high prices” and the confusing situation of the “preferred currency” are guided by the regime. Instead of being a tool for controlling inflation and managing the foreign exchange market, the preferred currency has become a tool for benefiting groups to seek large rents for themselves and their affiliated entities. Since this currency was assigned, statistics and evidence show billions in rent-seeking.”

Thanks to the state-controlled mafia, the regime’s president Ebrahim Raisi, who was supposed to be the country’s savior, has turned into a cancer for the country’s future prospects. Every day, the Iranian people become poorer.

“By the time Ebrahim Raisi’s government came to power, consumer and essential items had reached several times their original price during that period,” Jahan-e Sanat continued. Many income groups are unable to afford certain foods, such as meat and rice, and the middle class has become impoverished.”

The regime, as is customary, lies about its decisions. Officials initially stated that they would not eliminate the bread subsidy, but a few days later, the state media stated that “bread subsidy elimination is inevitable.”

“At first, the officials denied, and the head of the program organization announced that there would be no change in the price of bread,” the state-run Arman daily wrote on May 7. “However, despite all these denials, the price of bread will also increase.”

One of the contradictions that have led to this situation is that the country’s economy is geared toward the regime and its rule rather than the people’s well-being. As a result, under the mullahs’ rule, a disaster has developed that is unsolvable. In the coming months, the regime will face protests from starving people, and unlike the November 2019 protests, it will have no chance of overcoming them.