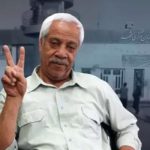 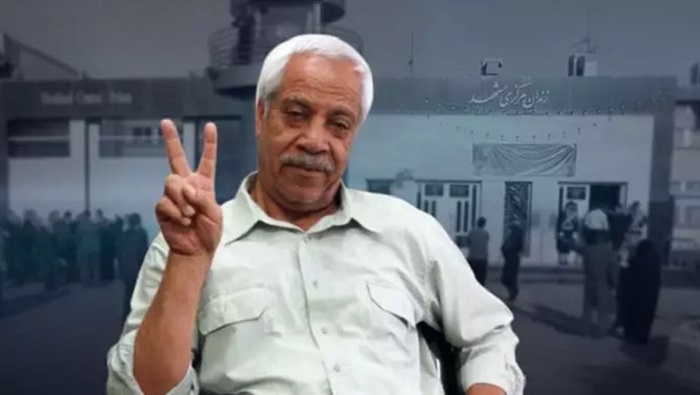 Hashem Khastar, a 68-year-old former teacher at Mashhad’s Agriculture Technical High School, was arrested by the Ministry of Intelligence and Security in 2008.

Hashem Khastar: In a letter to the Iranian regime’s leader, he stated that “Ali Khamenei is the root of all corruption and all problems” and that he must be held accountable. After refusing to stop his anti-regime activities, he was re-arrested in 2011. He has been detained several times for defending teachers’ rights and participating in a teacher protest rally, most recently serving a term in Mashhad’s notorious Vakilabad prison from 2009 to 2011.

Khastar was reported missing in Mashhad on October 23, 2018. His wife later revealed that he was being held in a psychiatric hospital by the Iranian regime’s Intelligence Ministry.

In May 2022, while in custody in Mashhad’s Vakilabad Prison, he wrote the following open letter:

“A teacher who is forced to fight against tyranny, dictators, and dictatorship will not find a place better than prison to become more familiar with the crimes committed by the clerical regime, including the massacre of political prisoners in the summer of 1988.

“The regime’s Supreme Leader Ali Khamenei is not committing simple policy mistakes. Rather, he is intentionally destroying a nation. Only his inner circle and those close to him have amassed astronomical wealth. There are hundreds of billions of dollars stashed in foreign bank accounts belonging to the regime’s insiders, and billions more are seized by government officials and the Islamic Revolutionary Guard Corps (IRGC). Billions of dollars have been spent [by the regime] in Nigeria, Lebanon, Palestine, Syria, Iraq, Yemen, Bahrain, Saudi Arabia, and Afghanistan. Why are the people forced to remain unaware of such things? Khamenei is the king of thieves, and in order to retain that position, he has to be the king of suppression of freedom-loving people and consequently the king of murderers.

“[Regime president] Ebrahim Raisi, known as the “Massacre Ayatollah,” is a former death judge during the massacre of political prisoners in 1988, in the course of which thousands of innocent human beings, none of whom were sentenced to death originally, were executed. Raisi was rewarded by Khamenei for his role in the massacre of political prisoners. He first became the head of the Astan-e Quds Razavi [foundation], then the judiciary chief, and now president. This is an affront to the Iranian people. And the Iranian people will answer it in time.

“The faces of the murderers resemble those of cruel animals. Look at the faces of Raisi and [former minister of justice Mostafa] Pourmohammadi, two former judges of death. Blood is drenching their eyes. Their eyes are like the eyes of a wolf.

“Kazem Parsi Moallem and Amir Akbar Oghli were conscripts who were executed. Ms. Vaziri, a teacher, and Mr. Kazem Parsi’s wife were in this prison at the same time with their two children, Zeynab and Salman. After nearly two years in prison, Ms. Vaziri Azad and her husband, who had been sentenced to 15 years in prison, were executed in the summer of 1988. Amir Akbar Oghli enlisted in the army in 1980 and was instructed to go to Kurdistan after completing his training. Amir said “I will not fight against my compatriot Kurdish brothers” and deserted. He was arrested in 1981 for deserting the army and sentenced to 7.5 years in prison. In 1979, he was also charged with carrying humanitarian aid gathered by the Mujahedin-e Khalq (MEK), using his father’s truck, for victims of the Qaen earthquake. This was an additional reason for his arrest. His family was awaiting his release in 1988 but was informed that he had been executed instead. Amir refused to enlist in the armed forces and was executed. In the U.S., Muhammad Ali refused to join the army to fight in Vietnam. He was tried but acquitted.

“There is absolutely no doubt that this crime [1988 massacre] constituted a crime against humanity. It did not only take place in the two cities of Tehran and Mashhad. There are mass graves in most Iranian cities, and one day the Iranian people will know about them.

“The agent of the Ministry of Intelligence, Hosseini, wanted me to confess that Sarah, one of the children of executed victims of the 1988 massacre, called me “uncle.” Let me state loudly here: “Children of executed political prisoners, I am proud to be your uncle, the uncle of Salmans and Zeynabs and others!”

“I want to see the parents of Amir Akbar Oghli and kiss them on the cheeks and grieve alongside them for their loss. I want to yell out loud: “Amir and all the ‘Amirs’ are still alive and they are a source of pride for all humanity. They do not belong only to the Iranian people. They belong to all of humanity and all generations. Do the martyrs of the great French revolution only belong to France? No, they belong to all of humanity. The martyrs of the liberation movement of the Iranian people do not only belong to the Iranian nation. They belong to the entirety of humanity and especially the peoples of the Middle East who will achieve freedom and democracy by following the Iranian people’s example. The hands of Amir, who gave his life for his country by refusing to fight against his own Kurdish compatriots and declined to take part in the armed forces, now extend from Mashhad to Kurdistan. His Kurdish compatriots are embracing his spirit and know that they share a common cause. They know that they will be united once again in the very near future after obtaining victory against religious tyranny and that we will rebuild our country.

“Such popular hatred and animosity for the dark criminal forces of tyranny and ruling mullahs have been unprecedented in Iranian history. They will soon see the people on the streets with the chants of “Long live freedom” and “Death to religious tyranny.” They will call for freedom.

“The ruling criminals and thieves must know that the mass graves of political prisoners executed in 1988 are revered and respected by the people of Iran and people throughout the world. They will soon become shrines for freedom lovers.

“Nations live with the memory of their legends in order to survive and thrive among other nations. The victims of the 1988 massacre resemble suns that brighten the skies over Iran. The Iranian people are energized and motivated by the heat that these suns generate. The people of Iran will rebuild their country in a way that it will become the envy of the world and a source of pride and dignity for every Iranian.

“In the eyes of the mullahs, the Iranian people apparently overthrow the Shah during the 1979 revolution to replace it with a turbaned king so that he can better steal and kill under the banner of religion.

“With the upcoming revolution, the Iranian people know full well what they want. The people have discovered the source of all their ills, which is religious tyranny. The cure is freedom and democracy and the Iranian people know this. Nations of Europe first dethroned the church and then overthrew monarchs in order to return power to parliaments and all the people. In Iran, the people overthrew the monarch first, throwing it in the ash heaps of history, and now it is the mullah regime’s turn to be dethroned and sent to the ash heaps of history.

“In the contemporary history of Iran, the Shah and the Sheikh have always cooperated and acted against the interests of the Iranian nation at critical junctures. This historical complicity can also be seen even now when the nation rises up during protests. When the protests and uprisings of the Iranian nation become serious and intensify, they either suppress them or try to divert them. In every protest, we have witnessed how the Shah and the Sheikh, with the Ministry of Intelligence coordinating the show, bring in the ludicrous slogan of “Reza Shah, praise your soul” through the work of Bassij paramilitary and other well-known agents. They want to broadcast this slogan to overpower the genuine and justice-seeking slogans of the people. In this way, they want to divert the objectives of uprisings and give the impression that the Iranian nation is a desperate people who are simply longing for the past and a dead king. They are trying to prevent the people from looking to the future and the establishment of popular sovereignty. The mullahs use this ploy to extend their rule for a few more days and avoid being overthrown.

“If I die for any reason before the victory of the freedom revolution, please bury me, without any fear and with all the strength possible, alongside the burial sites of the political prisoners executed in 1988. If for any reason you were unable to do this, pull my cascade out later and bury me alongside the executed political prisoners. If I were to remain alive, I would love to humbly offer tea to the families and loved ones of the victims at the burial sites. I want to visit the burial sites of the eternal flowers and proclaim that they will always remain in the hearts and minds of the people. They resemble trees that will continue to grow taller. The scent of their flowers will cover the entire world. The entire world will come to visit their graves. I want to tell the families of the victims of the 1988 massacre that, “Uncle Hashem” will kneel and offer you tea at the burial sites of these extraordinary heroes. I will dust off their gravestones with my eyelashes and will wash them with my tears. I dedicate this to the families and friends of the executed political prisoners of 1988. They have relayed the voice of these innocent victims not only to the Iranian people but to the international community as a whole. We will soon see justice implemented against their murderers.”