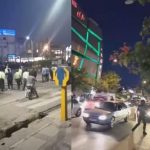 Iran: Major Protest Erupt All Across Iran in Response To Sharp Increase of Prices

“Death to Khamenei, Raisi,” and “Death to the principle of Velayat-e-Faqih (one-man dictatorship)” were chanted by outraged protesters, who clashed with repressive regime forces in many cities.

Popular protests against rising prices continued for the fourth night in a row on Saturday evening, May 14, in Quchan, Hafshejan, Farsan, and Babaheydar, Chaharmahal Bakhtiari Province, Borujerd, Boroujen, and Razaviyeh districts of Tehran, despite widespread repressive measures.

On Saturday morning, residents of Neyshabur staged an anti-regime demonstration to protest rising prices. Repressive forces opened fire on the people in Hafshejan, and angry residents set fire to the repressive Basij center.

The mullahs’ regime has taken extensive security measures to prevent protests from spreading across the country. Repressive forces have been deployed in Tehran, particularly in the city’s central areas. The heavy presence of intelligence, State Security, and military forces have been reported in Khuzestan Province cities and many other cities such as Borujerd, Sanandaj, Mahabad, and Ilam. Many young people have been arrested in recent days in various cities, and the Internet has been shut down or throttled.

Ebrahim Raisi (Regime’s president), Mohammad Bagher Ghalibaf (speaker of the regime parliament), and Gholam-Hossein Mohseni-Eje’i (chief of the regime judiciary) met today to defend the state’s plan to raise the price of essential goods, emphasizing “the cooperation and collaboration of all branches of the state in implementing the plan.” “We must act so that the goods and items required by the people are distributed quickly in the markets,” they claimed.

Several protesters have been killed or injured in recent demonstrations, but the regime has refused to release the information. Bahrouze Eslami, father of two was killed in Babahaydar.

“If you received negative clips or messages on your smartphone, they are from the enemies,” Mohammad Bagher Laini, Khamenei’s representative in Mazandaran Province, said in Friday’s prayer ceremony, referring to calls encouraging others to join the protests. They belong to the hypocrites (A pejorative used by the regime to demonize the People’s Mojahedin of Iran (PMOI/MEK)). Do not read them, or if you read them, do not send them to others. Let this situation (uprisings) subside!” “Rioters from the outside and inside want to seize this opportunity and repeat what happened in the streets in 2009 and 2019 (uprisings),” he warned.

The continuation of the protests with chants of “Death to Khamenei,” “Death to Raisi,” and resistance against the IRGC and Basij, heralds the dawn of final victory over the mullahs’ predatory and criminal regime, said Mrs. Maryam Rajavi, President-elect of the National Council of Resistance of Iran (NCRI).