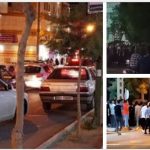 Protests Against Rising Food Prices are Spreading Across Iran More cities of Iran are becoming scenes of intensifying protests over sudden price hikes of basic goods – May 13, 2022

In Shahin Shahr, enraged youths set fire to a mullahs’ regime-affiliated site next to state police. People were seen chanting “Mullahs must get lost!” in different streets in Borujerd, Khorramabad province. Protesters were refusing to back down in the face of the regime’s oppressive forces.

The regime’s security forces attacked protesters in Ardabil, who retaliated by using various tactics to defend themselves and continue their demonstrations. As the regime’s crackdown measures intensified, activists in the cities of Borujerd, Dorud, and Farsan reported that the regime’s state security forces and anti-riot units began opening fire to quell the protests.

Despite the regime’s authorities and security forces imposing unofficial martial law in various cities on Friday night, protests continued. Security forces have also been on high alert in various cities, including Mashhad, where local officials have deployed a larger force into the streets. According to reports, security forces raided people’s homes in the Kuy Alavi town of Jooneqhs and the Zargan district.

Security forces attack protesters with batons and tear gas, as well as firing bird shots, according to footage posted on social media platforms and various websites. The exact number of people killed or arrested is unknown, but state media have reported at least 22 arrests so far.

Experts say regime authorities have cut internet connections in many parts of Iran, including the entire province of Khuzestan.

Raisi, on the other hand, has failed to resolve any of Iran’s mounting economic crises during his tenure. Meanwhile, the prices of various daily necessities are rising, prompting an increasing number of protesters to vent their frustration and anger in the streets by staging anti-regime demonstrations.