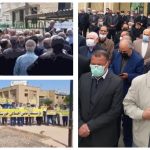 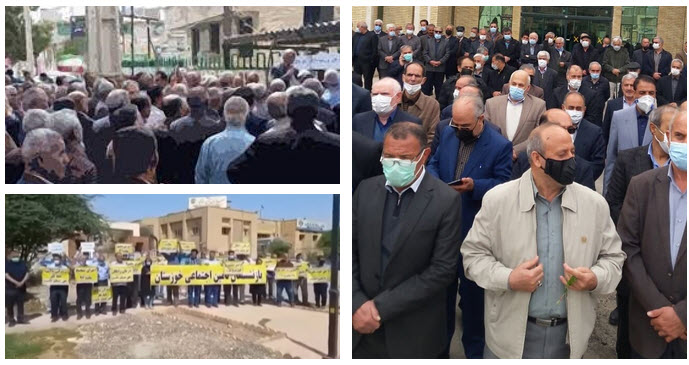 To prevent reports of anti-regime protests from reaching the outside world, regime authorities are disrupting and/or completely shutting down the internet in a number of provinces.

Tense atmospheres have been reported by activists in cities all over Iran. To prevent reports of anti-regime protests from reaching the outside world, regime authorities are disrupting and/or completely shutting down the internet in a number of provinces. Despite these measures, citizens are finding ways to send reports and footage of widespread protests and clashes between angry locals and regime forces in many cities, particularly in Khuzestan’s southwest province.

Youths in Izeh, Masjed Soleyman, Susangerd, Qom, and other cities have been seen chanting:“Death to Khamenei!” in reference to regime Supreme Leader Ali Khamenei“Death to Raisi!” in reference to regime President Ebrahim RaisiAnd “Khamenei must die!” as protesters are standing up to the regime’s repressive forces. Regime officials are also voicing repeated warnings about the country’s powder keg society.

On May 7, Alireza Habibi, the head of the state-run Culture Radio station, said, “Conditions across the country are critical.” “Considering skyrocketing prices, the society’s status quo is such that we should not provoke [protests].” “You must be on high alert,” he said, adding that “even the smallest mistake will be unforgivable.”Habibi stated in his remarks that the current tensions are of a “security” nature, implying that the regime is concerned about protests turning into a nationwide uprising.

According to the state-run Arman daily on May 9, “we are facing prices that are increasing by the minute” and more than 60% of the country’s population lives in poverty. “Media outlets linked to dissident groups portray the current situation as tumultuous.”Tehran Mayor Alireza Zakani said, “The enemy is attempting to pit the people against the state.”Gholamreza Mesbahi-Moghaddam, a senior member of the regime’s Expediency Council, warned, “They want to position the society against Raisi.”

In response to these warnings, Khamenei has dispatched a large number of state security forces into the tumultuous cities and areas where unrest has been reported, as well as shutting down internet connections. Authorities dispatched anti-riot units from Isfahan in central Iran to the cities of Izeh, Susangerd, Ahvaz, and Masjed Soleyman after cities across Khuzestan province in southwest Iran reported protests. The fact that authorities have been forced to shut down the internet is proof that popular protests are intensifying, and regime officials fear a repeat of the nationwide protests seen in November 2019.

Can Khamenei, through domestic repression and internet censorship, prevent further protests and a nationwide uprising?Khamenei should have been able to prevent the initial sparks of unrest he could. He and his regime officials are well aware that any of these protests have the potential to spark a larger, nationwide movement. This is precisely why the regime’s security forces have been on high alert recently as the price of basic goods, including bread, has skyrocketed. To prevent any signs of possible popular protests, security forces have been stationed in city squares and other key areas.

The recent unrest has been sparked by high prices for the people’s most basic daily needs, which extends beyond the November 2019 uprising’s gasoline price hike, water shortages for the country’s farmers, and the environment.

On the other hand, from late March to the present, Iran has seen an increasing trend of popular protests, as well as an increase in the number of anti-regime measures carried out by members of the Iranian “Resistance Units,” a network affiliated with the Iranian opposition People’s Mojahedin of Iran (PMOI/MEK). This ongoing campaign is instilling new hope in the Iranian people and strengthening their resolve to resist the regime of the ruling mullahs.

As a result, despite the fact that the mullahs’ regime has gathered all of its forces and is implementing a long list of oppressive measures against Iran’s disgruntled population, protests are spreading to more cities across the country.

As a result, more regime officials are expressing their concerns and issuing warnings. “We are all in the same boat!” wrote the state-run Arman daily on May 9. None of us will survive if it begins to sink!”