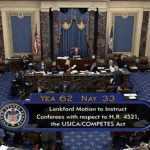 Written by Mohsen Aboutalebi on May 12, 2022. Posted in NEWS 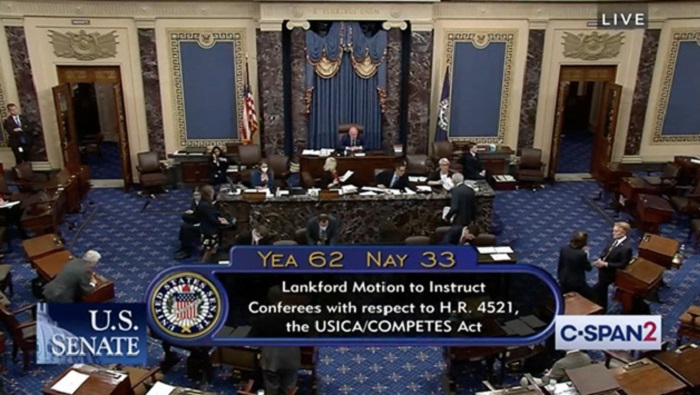 Sen. Lankford’s Motion to Instruct Conferees, with language requiring any nuclear agreement not to delist Iran’s Islamic Revolutionary Guards Corps (IRGC) as a Foreign Terrorist Organization, passed with bipartisan support of 62-33. May 4, 2022.

The United States Senate passed two motions on Wednesday, May 4, sending a strong message with strong bipartisan support demanding that sanctions on the Iranian regime’s Central Bank be maintained and that the Islamic Revolutionary Guard Corps (IRGC) be kept on the State Department’s list of Foreign Terrorist Organizations (FTO). Senator Ted Cruz proposed one of these two motions, which received a resounding 86 votes. According to Sen. Cruz’s motion, US policy should limit “cooperation through terrorism-related sanctions imposed on the Central Bank of Iran and the Islamic Revolutionary Guard Corps, as such sanctions are necessary to limit such cooperation.”

Senator James Lankford proposed the second motion, which received 62 votes in favor. “Any deal with Iran would have to address Chinese purchases of Iranian oil, as well as Iran’s nuclear proliferation, ballistic missile development, and support for terrorism,” according to this motion. The MTI would also prevent the president from lifting the Islamic Revolutionary Guard Corps (IRGC) designation as a Foreign Terrorist Organization (FTO), the military of the world’s leading State Sponsor of Terrorism (SST).” This bill, dubbed the Iran sanctions bill, imposes extremely stringent conditions on the lifting of sanctions against the Iranian regime.

In the midst of ongoing developments between the West, particularly the Biden administration, and the mullahs’ regime, these two motions carry significant weight and send an important message.

To begin with, in Washington’s polarized atmosphere, bipartisan support on a sensitive topic is extremely rare. Similar measures have been seen in the US House of Representatives, indicating that this consensus is not limited to the US Senate. With 424 votes in favour and only two votes against, the House passed H.R. 6089 – Stop Iranian Drones Act on April 27.

Senator Robert Menendez, Chairman of the Senate Foreign Relations Committee, and Senator Chuck Schumer, the Senate Majority Leader, were among the Senate and House members who voted in favour. These votes, along with other recent bills and statements from senators and representatives in the last two months, have created a strong atmosphere among Washington’s highest political officials. As Tehran demands a nuclear deal, this will make it extremely difficult for the US administration to remove the IRGC from the State Department’s FTO list.

In Washington, the growing anti-appeasement sentiment is becoming more noticeable. “We do share the Senate’s concern about other aspects of Iran’s behavior, including their development of ballistic missiles, support for terrorism through the IRGC, and other elements,” US State Department spokesperson Ned Price said on May 6. Together with our partners, we are committed to doing everything we can to counter the threat posed by the IRGC.”

Of course, reaching a bipartisan agreement between the Iranian regime and the IRGC was not easy. Members of the two major US political parties disagree on even the most basic topics, but they are in astonishing agreement on Iran, the Iranian regime, and the Iranian Resistance, according to a prominent supporter of the Iranian opposition coalition National Council of Resistance of Iran (NCRI).

The NCRI and its cornerstone member, the People’s Mojahedin of Iran (PMOI/MEK), have spent decades exposing the mullahs’ human rights violations, nuclear weapons drive, global support for terrorism, missile development and suicide drones, financial corruption, and other issues. Supporting the mullahs’ regime has become extremely expensive for any member of the international community, and it is now crystal clear how to stand on the right side of history when it comes to Iran and the Iranian people.