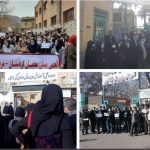 Teachers Take the Streets all Across Iran on International Workers’ Day 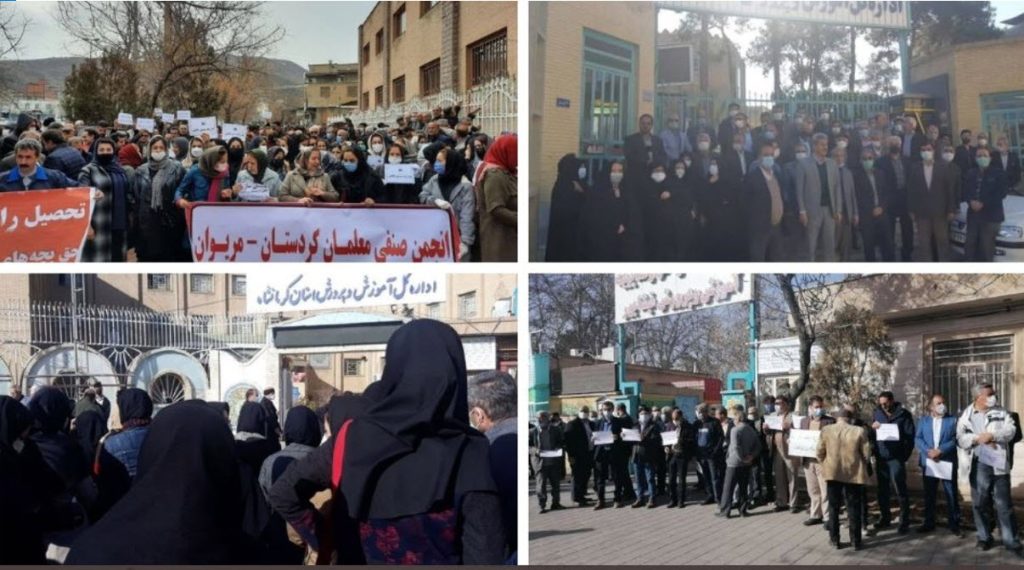 Thousands of teachers took to the streets in at least 55 cities across 21 provinces in Iran on May 1.

Thousands of teachers took to the streets in at least 55 cities across 21 provinces in Iran on May 1.  Despite severe repressive and security measures based on prior notice, teachers and pensioners rallied outside local education departments. Security forces had stormed activists’ homes in several cities the day before, including Tehran, Saqqez, and Ahvaz, detained them, and seized their belongings, including laptops, cell phones, and electronic devices. Teachers, on the other hand, did not give in to intimidation and staged protests.

Teachers chanted in several cities, “Prison is not a place for teachers, Iran is not a place for oppressors,” in response to the regime’s oppressive measures.” Illiterate Raisi, this is the last warning; the teachers’ movement is ready to revolt,” and “Liar Raisi, what happened to your empty promises,” protesters slammed regime president Ebrahim Raisi. Raisi is known as the “Butcher of Tehran” because of his role in the 1988 massacre of political prisoners.

“Freedom-loving teachers in Tehran held a rally in the park and areas adjacent to the Ministry of Education due to the security atmosphere and the large presence of plainclothes security forces,” the Iranian opposition coalition National Council of Resistance of Iran (NCRI) said.

“Since yesterday, officials have summoned or detained approximately 40 teachers across the country,” a teachers’ representative told a crowd in a park. “[We would never have come into the streets if we were afraid of you] and we do our best until we get our undeniable demands.” “Political prisoners must be freed; Imprisoned teachers must be freed,” protesters chanted.

#EbrahimRaisi's name is synonymous with awful crimes against humanity.

Not only did he mass murder thousands of political prisoners in #Tehran during #1988Massacre but he sentenced many inmates to amputation, lapidation, and falling.

Will the west still appease such a criminal? pic.twitter.com/2uvKRPNkVx

The Iranian opposition, the People’s Mojahedin of Iran (PMOI/MEK) official website stated, “In their May Day statement, the teachers said that teachers and workers in Iran have been denied basic universal rights, including wages above the poverty line, health care, social security, and the right to assembly and protests.” “So far, the regime has either ignored or responded with force and suppression to the teachers’ cries.”

#IranProtests#Tehran, #Iran's capital—teachers rally in a park, following the regime's prevention from their rally outside the Parliament on #WorkersDay.

"Officials summoned or jailed 40 teachers," the representative read. "We never came into streets if we were afraid of you." pic.twitter.com/MJxsTMxCy4

According to reports, people from all walks of life joined the teachers’ protests, demonstrating their support for their just cause. Workers, retirees, and pension recipients from the Social Security Administration joined brave teachers in several cities.

On May 1, NCRI President-elect Maryam Rajavi saluted courageous protesters who chanted for their inalienable rights. “On Labor Day, Iranian teachers, workers, and retirees marched across the country. “They cried out, ‘The teachers’ place is not in prison; the tyrants’ place is not in Iran,'” Mrs. Rajavi stated.

“With unity and solidarity, the Iranian people and resistance will sweep away the oppressive and criminal mullahs and make Iran free and prosperous.

Iranian teachers, workers, and retirees took to the streets across the country on Labor Day. They called for unity and cried out, “The teachers’ place is not in prison; the tyrants’ place is not in #Iran.”#IranProtests pic.twitter.com/2ThOuMvgTp