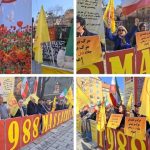 Iranians Protest in Stockholm, Demanding Accountability for the 1988 Massacre 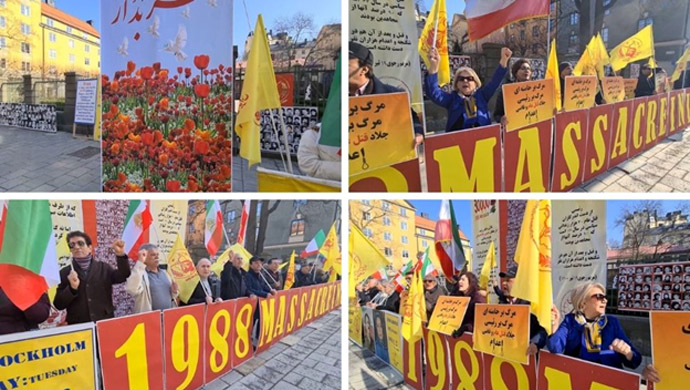 Freedom-loving Iranians and family members of the victims of Iran’s summer 1988 massacre rallied in Stockholm, Sweden – on March 22, 2022

On Tuesday, March 22, freedom-loving Iranians and relatives of the victims of Iran’s 1988 massacre marched in Stockholm, urging the international community to hold the clerics’ regime in Tehran accountable for continued crimes against humanity, and genocide. On Tuesday, the rallying Iranians chanted: “Four decades of crimes! Down with this regime!” “Criminal Hamid Noury represents the mullahs’ deviousness!” “Death to Khamenei and Raisi! Khomeini be damned!” referring to the regime’s Supreme Leader Ali Khamenei, President Ebrahim Raisi, and the regime’s first supreme leader Ruhollah Khomeini.

“1988 massacre saw 30,000 hangings! Raisi is the murderer of the 1988 massacre!” “Iranian people want murderers to be held accountable!”People have traveled from all over Europe, enduring the bitter cold of Sweden’s winter season, to express their demands as an Iranian regime functionary named Hamid Noury stands trial for his role in the 1988 executions of over 30,000 political prisoners, mostly members and supporters of the Iranian opposition, the People’s Mojahedin of Iran (PMOI/MEK).

In the summer of 1988, the Iranian leadership began a huge killing spree in jails around the country, which lasted more than 33 years. A brutal campaign targeted political inmates from a range of backgrounds, culminating in mass executions of youths, seniors, and even pregnant women.

The massacre of more than 30,000 political prisoners in Iran in 1988 has been called the biggest crime against humanity since World War II. Raisi was a member of the infamous “Death Commissions,” which were in charge of holding mock “trials” that decided the fates of thousands of political prisoners in minutes. None had been sentenced to death, and many had already completed their time in prison and were being held behind bars with the intention of being executed.

In a videotape released in 2008, a former Iranian Intelligence Ministry deputy alleged that the mullahs’ dictatorship had massacred 33,700 political detainees and buried them in mass graves. According to Reza Malek, the country has between 170 and 190 mass graves. The 1988 massacre was thoroughly researched by Geoffrey Robertson, QC, who stated that this mass killing amounted to “genocide.”

“It has been a crime to kill prisoners for centuries. The difference is that if it amounts to a particular crime of genocide, there is an international convention that binds countries to take action and punish that genocide,” he said in an online conference held in August of last year.

“It seems to me that there is very strong evidence that this was a genocide. It applies to killing or torturing a certain group for their religious beliefs. A religious group that did not accept the backward ideology of the Iranian regime,” Robertson added referring to Khomeini’s fatwa as the basis of the massacre.

“There is no doubt that Raisi and others should be prosecuted.” There has been a crime committed that engages international responsibility. Something must be done about it as has been done against the perpetrators of the Srebrenica massacre,” he reiterated.

Protestors Iranians in Stockholm are calling for the appalling human rights record of the Iranian regime to be sent to the UN Security Council and hence to the International Criminal Court.