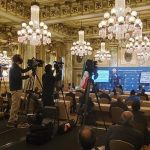 Written by Esmail Mohades on February 5, 2022. Posted in NEWS 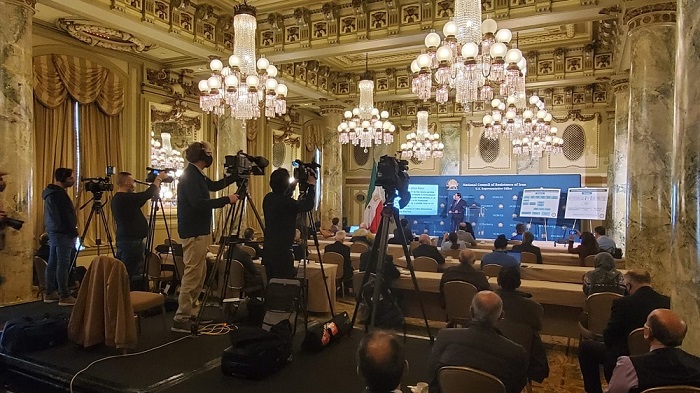 The IRGC-QF trains Yemeni, Iraqi, Syrian, Lebanese, and African mercenaries in specialized naval courses in Iran before dispatching them to their home countries to build naval units.

The National Council of Resistance of Iran (NCRI) made public its latest revelations about the Iranian regime’s newest strategy and terrorist army, the Revolutionary Guards Quds Force Naval Unit, on February 2, through its Washington Office, and provided details about its mission, bases, and the best way to confront it. The Quds Force has been recruiting mercenaries for newly organized, armed, and trained terrorist units to attack ships and maritime targets in the region, according to intelligence received from the major Iranian opposition’s network within Iran, the People’s Mojahedin of Iran (PMOI / MEK Iran).

The NCRI-US office detailed the IRGC-construction QF’s of terrorist naval units for the first time, including the cycle of recruitment and training for terrorist activities by proxy forces, as well as the cycle of supplying weapons and other logistical assistance to them. Tehran has increased its maritime terrorist activities employing its foreign mercenaries, particularly the Houthis of Yemen, since early 2021, and notably since August 2021, when Ebrahim Raisi took office as the new president of the Iranian regime.

The IRGC’s ability to intrude in Iraq, Lebanon, and Syria have been on the decline since the elimination of the Quds Force Qassem Soleimani in January 2020, which dealt a huge blow to the Quds Force’s ability to directly invade the area. To make up for this setback, the IRGC has resorted to action in Yemen, expanding naval terrorist activities and posing a threat to international shipping on the country’s coastline. 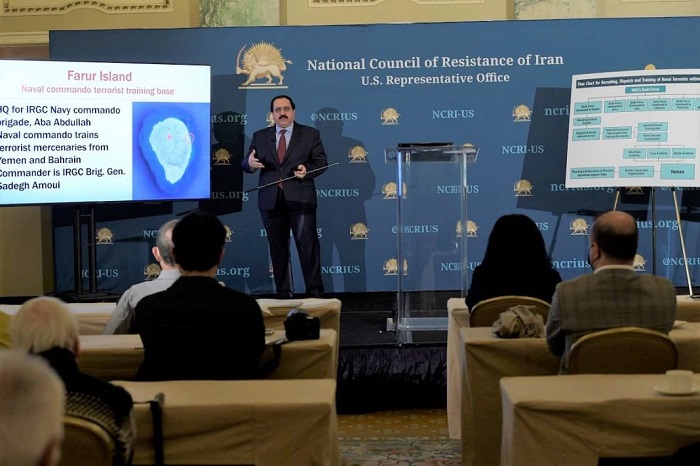 The IRGC-command QF’s center oversees the naval terrorist activities in the Red Sea and the Bab al-Mandab Strait, but the operations are carried out by naval troops allied with Houthi forces.

NCRI-US Deputy Director Alireza Jafarzadeh gave information about the IRGC-QF Naval Unit’s training sites and headquarters. The briefing also covered how the Quds Force Naval Unit’s trained troops are organized into naval commando battalions that are deployed in the Arabian Sea, Bab al-Mandab, and the Red Sea to disrupt commercial ship navigation, attack ports, conduct ship hijackings, and plant mines, among other things. From Yemen to Somalia, the Quds force has established a smuggling network to transfer weapons and equipment to its proxies for maritime attacks, utilizing a variety of routes and techniques.

The NCRI’s U.S. Representative Soona Samsami stated that ongoing concessions from Western countries, as well as a lack of responsibility for the Iranian regime’s terrorist operations and domestic deaths, have emboldened Tehran to escalate its defiant behavior, causing havoc in the area. Since December 2017, eight significant uprisings have occurred, as well as other rallies by diverse segments of Iranian society demanding fundamental change. Tehran’s current game plan, which includes creating terrorist naval forces and ramping up regional mayhem, is designed to display power and hide the country’s basic weakness. The dictatorship hopes that by projecting this image, it can gain more international and domestic influence.

Regardless of what the Iranian regime does with its nuclear weapons program and negotiations with the P5+1, Samsami added, Tehran must be held accountable for its regional proxy wars, terrorism, ballistic missile development, and egregious human rights violations and suppression of its own citizens engaged in ongoing uprisings.