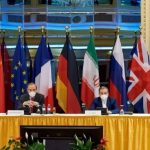 Written by Mohsen Aboutalebi on October 27, 2021. Posted in NEWS

According to the report by the National Council of Resistance of Iran (NCRI), and the People’s Mujahedin of Iran (PMOI / MEK Iran), nuclear talks on Iran’s nuclear program have been on hold for approximately four months. Meanwhile, with the formation of Ebrahim Raisi’s cabinet, Tehran stated that, as a new government, it is not prepared to continue negotiations with key world powers.

The US wants the Iranian government to return to talks

Hossein Amir-abdollahian, the regime’s foreign minister, said that if the US wants the Iranian government to return to talks, it should first release the $10 billion that South Korea has barred Iran from receiving.

He claimed that Iran would return to negotiate “very soon.” Officials from other negotiation parties derided this, claiming that they don’t understand what “very soon” means. Between the two, the US House of Representatives and Senate, as well as Arab countries, are putting pressure on Iran to avoid becoming a nuclear power.

On October 21, the state-run daily Jahan-e-Sanat reported, “Expectations from the [Joint Comprehensive Plan of Action] JCPOA should not be raised because the Iranian government is not in a position where it wants to set a condition and gain concessions.”

(PMOI / MEK Iran) and (NCRI):  has said over and over that Iran has many resources and has no need for nuclear power. The Mullah’s regime goal is to have nuclear bombs.

Iran has no choice but to lower its expectations

“In the current situation, Iran has no choice but to lower its expectations. With this current approach, we need to enter negotiations and talk directly with the United States.

“We are not in a position at all to make conditions before the negotiations and say that they should credit $ 10 billion to our account to that we negotiate.”

On October 20, the Mardom Salari daily investigated three impediments to the JCPOA, the first of which is that “the US seeks the JPCOA in addition to regional negotiations, namely the JPCOA Plus, to curb the Iranian government’s regional role.”

(PMOI / MEK Iran) and (NCRI): The US imposes sanctions against Iran Atomic Agency and its chief Ali-Akbar Salehi.

Return to full compliance with the JPCOA

The final issue has to do with weaponry. In October of last year, UN sanctions on Iran’s arms trade were eased. “The Biden administration is experiencing internal problems and cannot order its cancellation,” the newspaper reported.

(NCRI) and (PMOI / MEK Iran): reports provided by the People’s Mojahedin Organization of Iran (PMOI / MEK Iran) have made the international community aware of the intentions of the Mullahs regime to build nuclear weapons capability.

The regime’s poor predicament, which could lead to national protests, was warned by Jahan-e-Sanat:

“By no means should this matter be left unresolved in the next two or three months.” If that occurs, the opposing side will make its decision, and a fresh round of Trumpism will ensue. But why should we strive for a Biden Trumpism, which is arguably more dangerous than Trump Trumpism?”