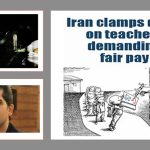 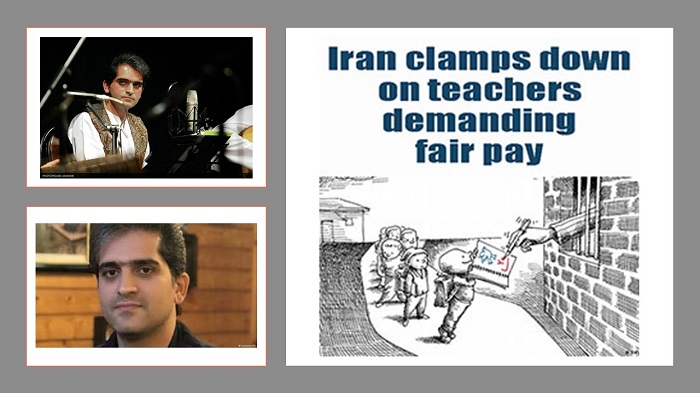 The National Council of Resistance of Iran (NCRI), and the People’s Mujahedin of Iran (PMOI / MEK Iran), reported that the spokesman for the teachers’ union, Aziz Ghasemzadeh was arrested conducting a phone interview with a Persian-language broadcaster.

The authorities are cracking down on teachers

“Union activists like Aziz Ghasemzadeh are accused of ‘endangering national security.’ The authorities are cracking down on them,” human rights lawyer Saeid Dehghan told DW.

“Ghasemzadeh is a teacher and a respected musician and singer. He is an educated and cultured person who is peacefully campaigning for more social justice and better working conditions. That is not forbidden under our constitution.”

Dehghan, who is from Iran’s capital, Tehran, represents political detainees in the country. Dehghan is concerned about activists being detained arbitrarily. He said the goal is to intimidate them into not organizing themselves.

The teachers noted the Iranian regime’s so many injustices in their chants. We cannot overcome the injustices of this criminal regime without a full-fledged resistance to uproot this illegitimate rule & realize freedom & sovereignty for the people #Iranhttps://t.co/cjKgFnCtda pic.twitter.com/dx63i4XmzN

The general discontent in Iran is very high

“The general discontent in Iran is very high, and any protest action has the potential to mobilize many people against the political system. That’s why, from the government’s point of view, any protest must be nipped in the bud.”

Aziz Ghasemzadeh had spoken at a protest gathering the day before his detention, right before the start of the new school year in Iran. More than 40 cities throughout the country held similar protests. The campaigners were advocating for improved working conditions and higher pay for teachers employed by the Ministry of Education.

Teachers have been without pay for months

Many of them have been without pay for months. After lengthy negotiations, the previous government of President Rouhani agreed to revise teachers’ pay in view of the country’s poor economic circumstances.

Teachers’ salaries were supposed to be increased by 20 percent to 27 percent. In Iran, however, the inflation rate in 2020 was 36.5% higher than the previous year. This year it is predicted to increase by about 40%.

The average cost of living in Iran climbed by more than 30% last year, according to the country’s statistics agency. “We are asking for our rights,” Aziz Ghasemzadeh said in a speech that rapidly went viral on the internet. The activists demanded not only equal pay but also immediate investment in renovating old school buildings and increasing the number of staff.

We are not going to give up

“Political leaders believe that arresting union activists will solve the problem. They are mistaken. We are not going to give up “In his speech, Ghasemzadeh said. He is now one of at least 15 Iranian teachers who have been imprisoned for their involvement in the union.

Esmail Abdi, a math instructor, is one of the most well-known prisoners. Abdi, a member of the Iranian Teachers‘ Trade Association’s executive board, has been in prison since November 2016. He’s been charged with “gathering information with the aim of endangering national security” and “propaganda against the political system.” which is the regime’s typical charge.

#Iran: In the Midst of Protest, Khamenei Warns of ‘Enemy Within the Country’, Mrs. Maryam Rajavi: Resistance, uprising, and the overthrow of religious fascism is the only way to realize the rights of retirees, teachers, and workers.#MEK https://t.co/b7mJVoV2YY

Education International, a labor organization, has frequently called for Esmail Abdi’s release and campaigned for global solidarity with him and other Iranian teachers imprisoned.

#MEK Resistance Units: “Nothing Can Prevent the Sunrise of Freedom from Shining, in Iran”, Teachers Coordination Council noted the dismal conditions of teachers and emphasized their demands in a statement released at the start of the new academic year.#MEK https://t.co/zRkKffS0Ma