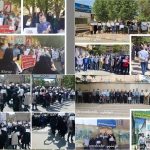 Written by Amineh Qaraee on October 1, 2021. Posted in NEWS 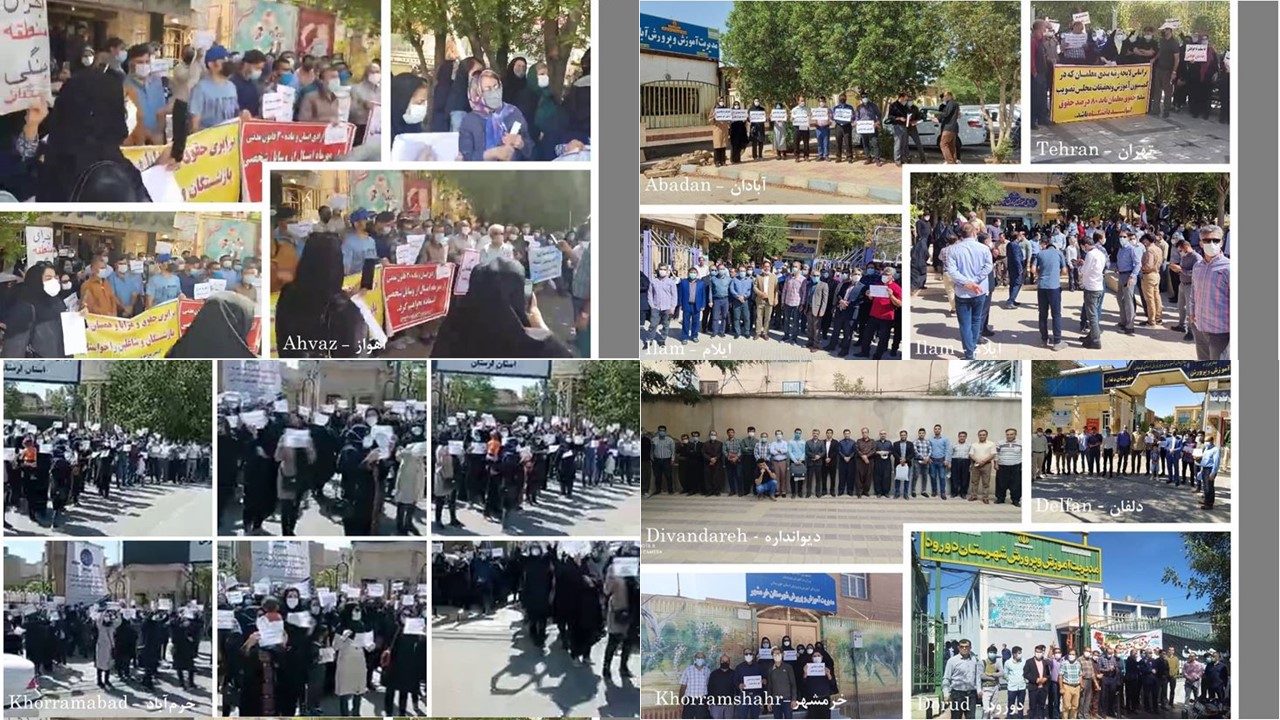 (PMOI / MEK Iran) and (NCRI): Teachers protested in front of the education ministry and government offices in Tehran and several other cities around Iran.

The National Council of Resistance of Iran (NCRI), and the People’s Mujahedin of Iran (PMOI / MEK Iran), reported that hundreds of teachers and academics protested across Iran at the start of the academic year because of their poor living conditions. Teachers protested in front of the education ministry and government offices in Tehran and several other cities around Iran. These protests followed a second round of nationwide demonstrations on Saturday.

The Iranian Teachers Coordination Council noted the dismal conditions of teachers and emphasized their demands in a statement released to commemorate the start of the new academic year.

“The government and Parliament are obliged to approve this initiative. If this initiative is approved and implemented, the legal basis for teachers’ wage will be at least 80 percent of that of faculty members, because teachers and members of faculty boards should be receiving equal salaries,” according to the statement. The regime has its hands in the pockets of teachers by refusing to sustain their low pay. Iran’s poverty level is 120 million rials (about $437 per month). Nonetheless, many instructors are paid 35 million rials per year or around 1,300 euros.

Many Iranians’ lives have been ruined

On September 25, the state-run Etemad daily said, “The bell of the first school year under the new administration rang, while demands and delayed wages of teachers grow and intensify every year.” Teachers, however, are not the only ones who suffer. Many Iranians’ lives have been ruined as a result of the regime’s systemic corruption, and the bulk of the population lives in poverty. In 2021, the wage base for workers will be 2 million and 600 thousand Tomans. Salaries have been boosted by 10% by the regime.

“Officials blame rising wages for rising inflation all of the time. On September 21, the state-run Kar-o Kargar daily said, “The 10% wage increase does not comply with the poverty line of 10 million Tomans.” Personal stationery is anticipated to cost over 3 million tomans. Nearly 4 million tomans are given to Iranian laborers. As a result, they should devote the majority of their earnings on purchasing school supplies for their children. In addition, the regime charges parents.

Furthermore, due to the Covid-19 pandemic, the regime has yet to decide whether to continue online courses or attend schools. In the last two years, many Iranian pupils as young as seven years old have committed themselves because they were unable to afford a smartphone to attend online lessons. In recent years, regime officials have acknowledged the profit-making state media, which is linked to the government and profits from online or in-person classes.

“There are mafias in the Ministry of Education with an annual income of 10 trillion tomans,” Mohammad Mehdi Zahedi, a member of the Parliamentary Education Commission, told the state-run Mashreq News on June 13, 2020.

The mullahs have been plundering the national wealth or seizing any opportunity to take people’s property for years because of the regime’s institutionalized corruption and its need to fund criminal activities in the region. The so-called “educational institutions” that are consistently linked to the regime’s corrupt institutions make up this mafia.

Another source of concern for Iranian instructors and students, as well as their families, is the escalating Coronavirus crisis. Many families fear their children will be infected with the new Covid-19 strain due to the regime’s cruel Covid-19 policy and refusal to vaccinate the whole population. Children and teenagers were being vaccinated by the government using the highly controversial Sinopharm vaccines.

The information presented above represents only a small part of Iran’s current societal problems. This administration is causing pain to the people. The public’s animosity toward the regime has grown as a result of these crises and the regime’s actions. Teachers and citizens from all walks of life have recently demonstrated their dissatisfaction with the regime.