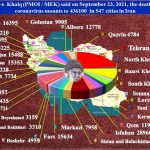 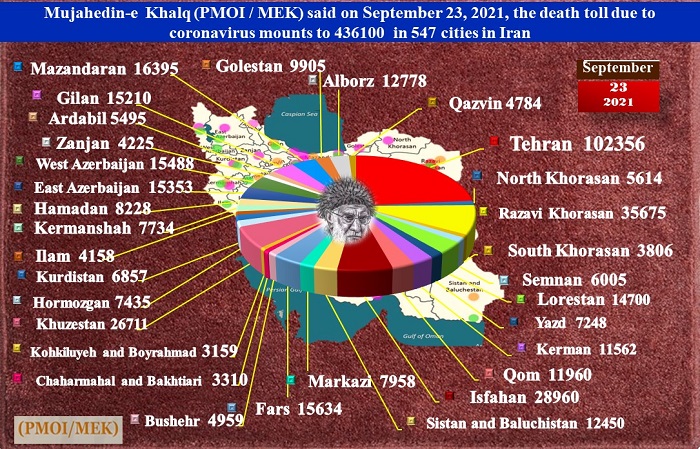 The National Council of Resistance of Iran (NCRI), and the People’s Mujahedin of Iran (PMOI / MEK Iran), 436,100 people had died in Iran as a result of the Covid-19 outbreak as of September 23.

In West Azerbaijan Province, 26 people died of Coronavirus during the past 24 hours; 319 are in ICU, and 71 are connected to ventilators. (State-run Radio and TV news agency, September 23, 2021)

National Coronavirus Combat Taskforce (NCCT) in Kermanshah: 219 COVID-19 patients are in ‌ICU, 48 are in critical condition, and 13 have died in the past 24 hours. (State-run Radio and TV news agency, September 23, 2021)

Hamid Souri, head of the National Epidemiologic Committee: The COVID-19 situation in the country’s northwest is worrying. We will soon see an outbreak of the disease in those provinces. Concerns about the arrival of new COVID-19 variants are entirely correct. (State-run media, Jame’eh, September 23, 2021)

Coronavirus Scientific Committee in Khorasan Razavi Province: We must be careful of the sixth COVID-19 outbreak. The sixth outbreak will likely begin in eastern Iran. (Jame’eh, September 23, 2021)

(PMOI / MEK Iran) and (NCRI): COVID-19 fatalities in 547 cities exceed 436,100. Tehran is in crisis as long as we don’t have a national system to evaluate mutated viruses, we will always be facing threats and we need to definitely provide measures to have an immediate and timely response,” said a senior health official in Tehran.

Qom University of Medical Sciences spokesperson said: “on Thursday that 93 new coronavirus patients were provided medical treatment in the past 24 hours. “83 new people were hospitalized throughout Qom during this period and unfortunately ten people lost their lives,”. (Tasnim, September 23, 2021)

Gilan University of Medical Sciences spokesperson said: “on Thursday that the chain reaction of this virus’ transmission remains active. Vaccination across the country has yet to reach 70 percent and therefore any negligence will result in a new surge in this illness, he added,”. (ISNA news agency, September 23, 2021)

Kermanshah University of Medical Sciences spokesperson said: “on Thursday that 13 coronavirus patients had lost their lives during the past 24 hours. “Currently we have 219 patients in ICUs and 48 are in dire conditions,” this official added,”. (IRIB news agency, September 23, 2021)

Kurdistan University of Medical Sciences spokesperson said: “In the past 24 hours, 380 new COVID-19 patients were identified, 939 were hospitalized, and 88 are in ICU,”. (Mehr news agency, September 23, 2021)