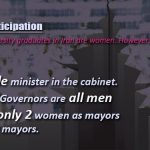 Written by Jennifer Jones-Kelley on April 30, 2021. Posted in NEWS 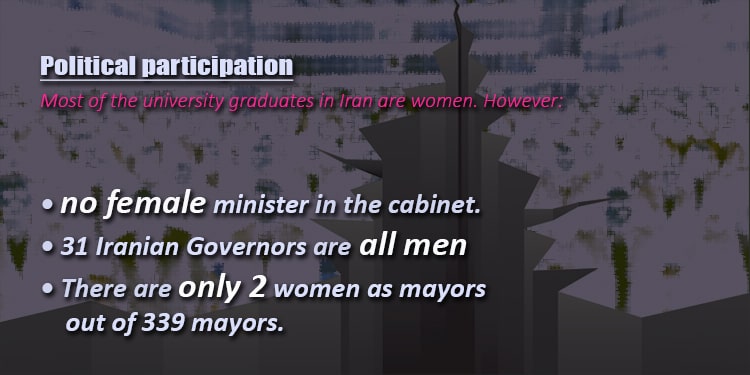 On April 26, the National Council of Resistance of Iran (NCRI) Women’s Committee released a report detailing the Iranian regime’s rejection of women from public life. The report lists women’s participation in elected and appointed positions in Iran from the office of President on down and highlights the gender gap in all levels of government.

The report also notes that the clerical regime is ruled by the principle of “Velayat-e-Faqih,” or absolute clerical rule, which grants absolute “political, economic, and military power” to a male Supreme Leader. Below the Supreme leaders are a 45-member Expediency Council and a 13-Member Guardian Council that functions as arms and determines the country’s policy. All of these members are male clerics. Each province and city also has a male cleric appointed by the Supreme Leader to lead Friday Prayers and carry the message of the Supreme Leader to the people.

(NCRI) and (PMOI / MEK Iran): Women may hold office, but the true power lies with the clerics.

The Iranian regime’s constitution states that the “President must be a man.”

The 34-member cabinet includes two women. The Head of Presidential Office, Chief of Staff, Secretary of the Cabinet, and all 19 ministers are men. The two women hold consultant positions, according to the NCRI report.

Rouhani has boasted about the number of women in deputy minister positions, but women hold only 5.5% of these appointments. These women serve as deputies, managers, and consultants. 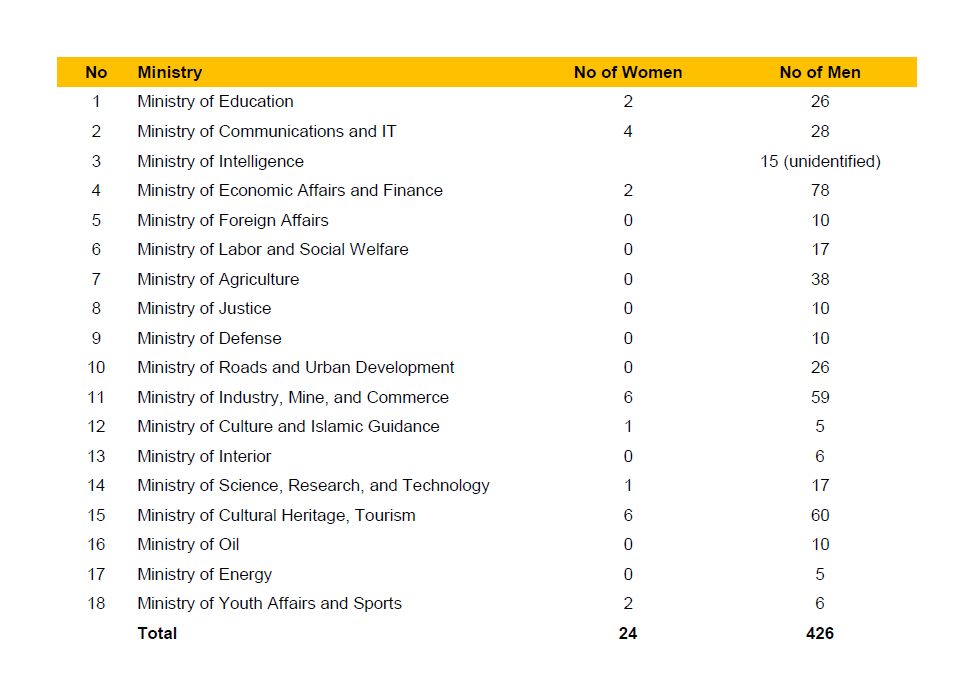 (NCRI) and (PMOI / MEK Iran): Rouhani’s government publicizes that this government involves many women in deputies of ministers’ positions, but this participation does not exceed more than 5.5%.

The regime’s 276-member Parliament consists of 260 men and 16 women. Women make up 5.7% of Parliament, according to the report by the NCRI.

All 31 Provincial Governors are men, according to the NCRI Women’s Committee Report.

77 of the regime’s 1,174 provincial officials are women. 31 of these women are heads of provincial Women and Family Offices and hold mostly ceremonial positions, according to the NCRI Women’s Committee report. The total number of women holding provincial offices is less than 7%. 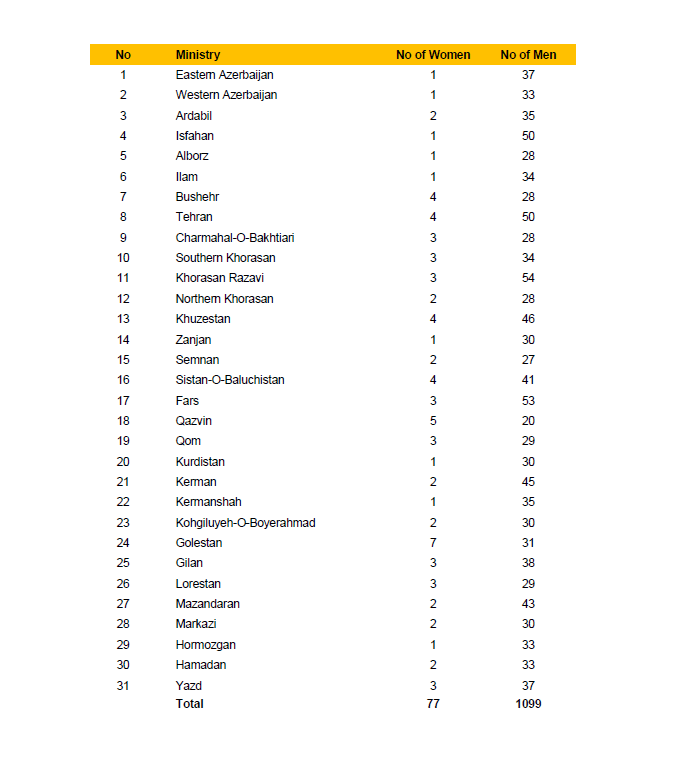 (NCRI) and (PMOI / MEK Iran): At the level of Provincial officials of the ruling religious fascism in Iran, out of 1,174 officials there are only 77 women

All 31 provincial capitals have men as mayors. Of the 339 mayors in Iran, only two are women. The populations of their cities are ranked 302nd and 319th in size.

The NCRI report determined the number of women working as municipal officials, including deputies, managers of organizations, subsidiaries, and regional managers. Out of 30 provincial capitals whose official websites were accessible, a total of 830 officials were listed. Of those, only 25 were women or approximately 3.11%.

The NCRI Women’s Committee used the same official websites to compile a list of city council members. Of the 321 council members, 38 were women. This is equivalent to 11.83%.

Sixty percent of Iranian students passing entrance exams for university last year were women, and the majority of Iranian university graduates are women, but women are drastically underrepresented in government and in the workplace as a whole. Women have a 70% unemployment rate in Iran, and many of these women are college graduates.

Iran is full of educated, talented women who have been placed on the sidelines and told to shut their mouths and do as they are told. The Revolution that is coming will be led by these women. 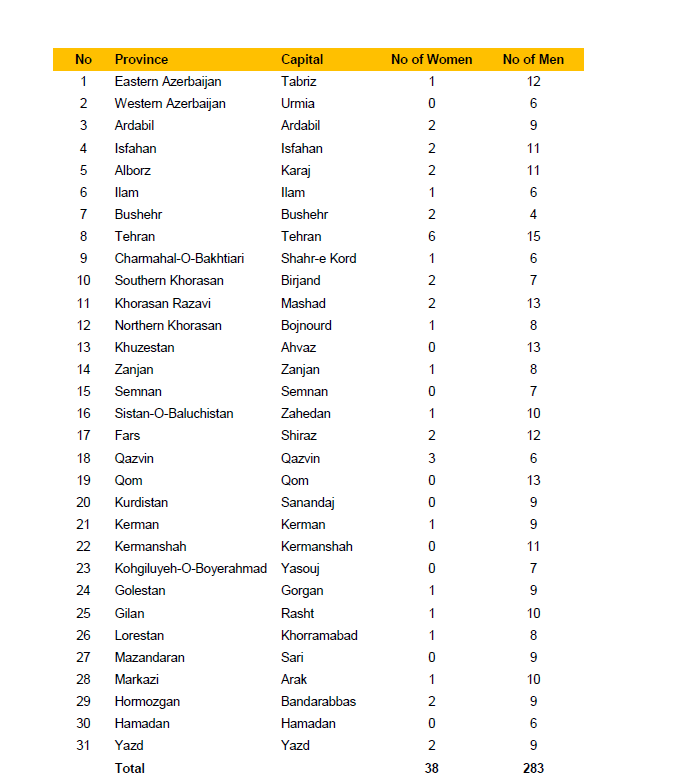 (NCRI) and (PMOI / MEK Iran): Women’s participation in city councils that do not have executive power is slightly higher.

Women may hold office, but the true power lies with the clerics, and it will until the regime falls. The MEK advocates a secular democracy with full gender equality and equal participation in public life.

Mojahedin Organization of Iran (PMOI / MEK Iran). Women stood at the forefront of the protests, forcing even regime leaders to acknowledge their role in organizing and leading the rebellion. One year later, the impact of the uprisings lives on, and the people of Iran are closer to regime change than ever before.