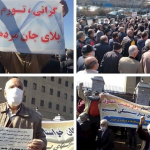 Written by Mohsen Aboutalebi on March 19, 2021. Posted in NEWS 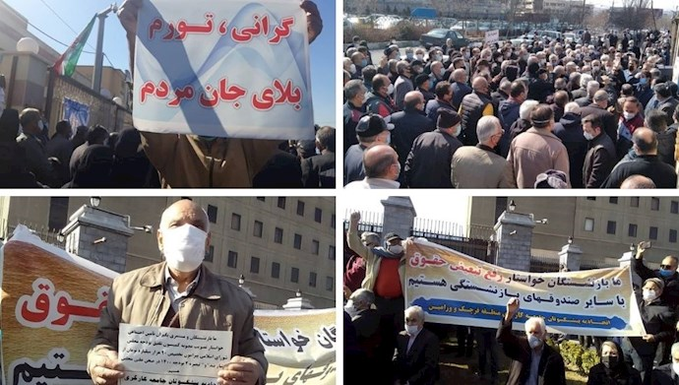 (NCRI) and (PMOI / MEK Iran): retirees and pensioners rallied in Tehran and 27 other cities for the seventh consecutive week to protest their living conditions.

The National Council of Resistance of Iran (NCRI), and the People’s Mujahedin of Iran (PMOI / MEK Iran), reported that a dozen cities across Iran witnessed protests by retirees and pensioners of Iran’s Social Security organization.

This is the eighth consecutive week that retirees hold nationwide rallies, demanding their long-delayed pensions adjusted with the rising inflation rate and the skyrocketing prices.

The public hatred towards the regime is acknowledged in these demonstrations and it shows that the regime “faces super crises and is threatened,” wrote the state-run Mostaghel on Sunday. It really should be noted that the group has “a population of 70 million dissatisfied individuals.” However, the regime ignores their calls. 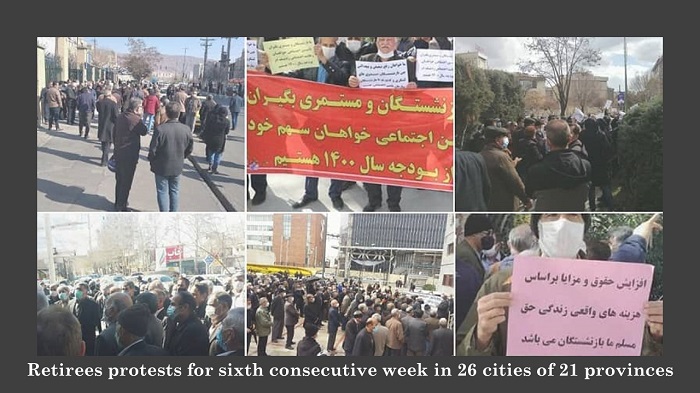 (NCRI) and (PMOI / MEK Iran): Retirees protests for the eighth consecutive week in 26 cities of 21 provinces.

Aligning with the inflation crisis, the Iranian regime refused to raise their pensions. While the regime claims that it does not have sufficient economic resources, on Monday the Revolutionary Guards (IRGC) unveiled another missile town and bragged its military power.

On 7 February 2019, according to the Regime website of Parliament, “Iran is the fifth richest country globally in terms of natural resources such as oil, gas, coal, wood, gold, silver, copper, uranium, crude iron, and phosphate. With one percent of the world’s population and soil equivalent to one percent of the earth’s surface, more It has 7% of the world’s mineral resources.”

And yet people struggle against poverty as the regime builds missiles and promotes terrorism.

People are standing in long queues to buy basic products because the government-affiliated mafia exports every day these needs, “the daily need of chicken in Tehran is one thousand tons, but only 200 tons are distributed,” asserted the state-run Arman-e Eghtesadi news agency on Sunday.

The state-run Keyhan daily on 4 March wrote, “the regime’s Supreme Labor Council so-called increased workers’ salaries. The minimum wage has reached 2.6 million tomans. This low increase of income does not affect due to the `50%’ inflation rate covering Iran’s economy, and the poverty line has reached 10 million tomans.”

The pension of retirees has decreased by more than 24 percent. These numbers are without a doubt the new skyrocketing inflation rate in the new Persian year.

Another nationwide uprising on the way

Banknote printing is offset, which increases the monetary base and liquidity and ultimately has an inflationary effect,” stated the state-run Arman daily in a piece published on Saturday.

This is why retirees chant the “enough with oppression” during their marches. These ongoing protests are escalating all across Iran and the regime will be confronted with another nationwide uprising like the one we saw in November 2019.