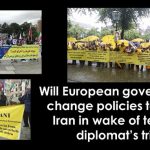 (NCRI) and (PMOI / MEK Iran): Four European countries pulled out of a joint online conference with Iran after the December 12 execution of dissident journalist Rouhollah Zam.

The International Trade Centre was set to hold a virtual summit on Europe-Iran economic relations prospects in December, but following Iran’s execution of journalist Ruhollah Zam, a French resident they’d lured into visiting Iraq, European participants pulled out and the event was postponed.

The National Council of Resistance of Iran (NCRI), and the People’s Mujahedin of Iran (PMOI / MEK Iran) reported that the virtual summit on Europe-Iran economic relations prospects in December, postponed, rather than cancelled.

It was an odd choice at the time and undermined any condemnation of the execution, but as we approach the rescheduled date of March 1, it seems even stranger.

Why? Because it will begin less than one month after Iranian diplomat Assadollah Assadi was found guilty of terrorism after plotting to blow up a 2018 opposition, the National Council of Resistance of Iran (NCRI), and the People’s Mujahedin of Iran (PMOI / MEK Iran) rally in France, which prosecutors said was at the behest of the regime’s leaders, including Foreign Minister Javad Zarif, who is Assadi’s boss.

Zarif is one of two keynote speakers at the upcoming event, alongside EU foreign policy chief Josep Borrell. A man likely responsible for a planned terror attack and a terrorism network in Europe will speak about a trading relationship with Europe.

Continuing with this event not only undermines Europe’s commitment to human rights globally, but also the safety and security of its own people. It is completely contrary to the recommendations given by many current and former European lawmakers over the past two months, which ultimately call on the EU to make all relations with Iran conditional on a solid improvement to human rights in Iran and an end to terrorism in Europe.

(NCRI) and (PMOI / MEK Iran): Continuing with this event not only undermines Europe’s commitment to human rights globally, but also the safety and security of its own people.

The mullah regime’s record for executions per capita

And, unsurprisingly, Zam’s execution is far from the only example of human rights abuses in Iran. In fact, the Iranian people have suffered massive oppression for forty years, not least the arbitrary killings of 1,500 protesters during the November 2019 uprising, the 1988 massacre of 30,000 political prisoners, or the regime’s record for executions per capita. Reuters confirmed in a special report on December 23, 2019, about the deadly crackdown on November nationwide protests in Iran the death toll of 1500 that was announced by the People’s Mojahedin Organization of Iran (PMOI) on December 15, 2019.

The Iranian Resistance wrote: “In recent years, the regime has prominently demonstrated its willingness to kill not only Western nationals that have strayed into its jurisdiction but also those who might stand in the way of its foreign objectives… The subsequent announcement of a new start date for the Europe-Iran Business Forum made it clear that not everyone was paying attention to those lessons.”