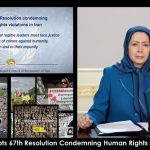 Written by Mohsen Aboutalebi on February 13, 2021. Posted in NEWS

The new administration has had a busy first month in office. Iran has not escaped his attention. The most recent concern is Iran’s sentencing of Emad Sharghi, an Iranian-American businessman.

The National Council of Resistance of Iran (NCRI), and the People’s Mujahedin of Iran (PMOI / MEK Iran) reported that Emad Sharghi was charged with espionage and has been sentenced to 10 years in prison. The charges against him were dubious, to say the least.

This is the type of action that foreign governments must take into account when dealing with Iran. The new administration has already discussed re-joining the Joint Comprehensive Plan of Action (JCPOA) that his predecessor pulled out of a few years ago. President Biden has said that the administration will then engage with Iran on issues like its support for terrorism and its ballistic missile program that the regime continues to develop.

#BREAKING: Ahead of Joe Biden taking office, #Iran's regime is taking more hostages. Emad Shargi, a U.S. citizen, was summoned to court on Nov. 30 & told he had been convicted of espionage without a trial & sentenced to 10 years.https://t.co/ka66I9Qa7X

However, the Biden administration has not spoken about the need to address Iran’s terrible human rights record that is deteriorating as time goes on.

Surely demanding the regime respects the human rights of its people is a given at this stage? Over the past few years, the regime has cracked down hard on dissent.

The November 2019 uprising in Iran

The number of political prisoners jailed across Iran is growing and protesters are harshly punished. During the November 2019 uprising in Iran, the authorities killed 1,500 protesters, injured thousands more, and arrested even more. Reuters confirmed in a special report on December 23, 2019, about the deadly crackdown on November nationwide protests in Iran the death toll of 1500 that was announced by the People’s Mojahedin Organization of Iran (PMOI / MEK Iran) on December 15, 2019.

Since the nuclear deal was signed in 2015, the human rights deterioration has been significant. The lack of attention given to this issue is unjustifiable. The people of Iran are trying to achieve freedom, peace, democracy and the most basic of human rights and the regime is doing all it can to silence them.

Foreign and dual nationals arrested and thrown in jail in Iran

If the Biden administration cannot pay attention to this, surely it should be paying attention to the sheer number of foreign and dual nationals that are arrested and thrown in jail in Iran? Siamak Namazi, an Iranian-American businessman, is currently jailed in Iran while his father Baqer Namazi is under house arrest. Conservationist Morad Tahbaz is currently in jail. Nazanin Zaghari-Ratcliffe is under house arrest after being jailed for years. She was taken into custody and separated from her young daughter during a visit to Iran to see family in 2016.

(NCRI) and (PMOI / MEK Iran): the sheer number of foreign and dual nationals that are arrested and thrown in jail in Iran.

Iran continues with its belligerence must stop

To move forwards constructively, the new US administration needs to form a comprehensive policy that will address all of Iran’s belligerence – from its terrorist activity, its nuclear and ballistic missile programs, its meddling across the region, it’s targeting of foreign and dual nationals, and its human rights abuses against the people of Iran. Anything less than this will give the regime the green light to continue with its belligerence, safe in the knowledge that foreign powers do not want to challenge Iran.

This is not to say that this will be an easy task, but it is an essential one. Stability will never arrive in the Middle East if Iran’s actions are not addressed. And human rights abuses, in any circumstances, should never be ignored or tolerated.