Written by Jennifer Jones-Kelley on February 5, 2021. Posted in MEK (PMOI) IN MEDIA, NEWS

(NCRI) and (PMOI / MEK Iran): Iranian Diplomat Sentenced to 20 Years for Foiled Bomb Plot in France-Assadollah Assadi is the first Iranian diplomat convicted for terrorism in Europe in a case that has soured Iranian relations with a key partner.

The Iranian regime has been called out for its treatment of dissident groups (the National Council of Resistance of Iran’s (NCRI), and the People’s Mojahedin Organization of Iran (PMOI / MEK Iran)) on foreign soil in a new study.

The non-profit Freedom House described a pattern of “transnational repression” by authoritarian countries in a report released on February 3. According to Freedom House, the authoritarian regimes cited in the report (including Iran) target critics living outside of their borders for harassment, direct attacks, and assassination.

The report stated that the same authoritarian regimes that harassed and assassinated dissidents living outside of their borders were quick to condemn the United States and Israel for targeted assassinations.

The Free Iran rally, where over 100,000 supporters of MEK gathered on June 30, 2018, to pledge support for the democratic alternative to the Iranian regime (the National Council of Resistance of Iran-NCRI). The Iranian regime had planned to bomb the gathering, but several of the Iranian regime operatives were arrested and sentenced to long imprisonment including one of its diplomats, Assadollah Assadi.

Condemnation of the U.S. and Israel

Iran was cited in the report, both for its status as the target of assassinations and as a regime with a robust program designed to seek out and destroy members of the People’s Mojahedin Organization of Iran (PMOI / MEK Iran).

During the presidency of Donald Trump, Iran portrayed itself as a victim of U.S. and Israeli aggression. Admittedly, Trump’s grandiosity and lack of diplomacy made the regime’s job easier.

Regime loyalists were particularly enraged after the U.S. assassination of Quds Force Major General Qassem Soleimani in Baghdad in January 2020 and the assassination of Iranian nuclear scientist Mohsen Fakhrizadeh outside Tehran in November. Israeli agents are widely considered to be responsible for the shooting. 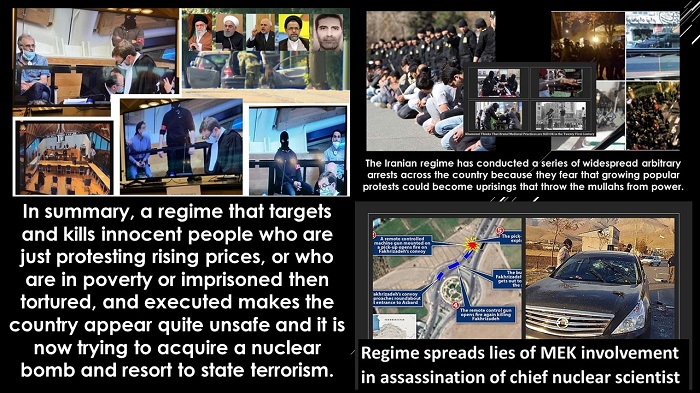 By targeting the opposition (PMOI / MEK Iran), Tehran was trying to demonstrate the regime’s strength in Iran and throughout the world.

According to the Freedom House report, the Iranian regime has denounced these assassinations by the United States and Israel, but at the same time it has been using a “full spectrum of transnational repression tactics.”

“Iranian leaders frequently portray its attacks on exiles as part of the same struggle against the United States and Israel, which they accuse of supporting terrorists,” the report said.

“The Iranian campaign is distinguished by the total commitment it receives from the state, the level of violence that it employs, and its sophisticated application of diverse methods against a similarly diverse set of targets,” the report added.

According to the Freedom House report, the Iranian regime has been linked to at least five assassinations or assassination attempts since 2014. Additional plots were interrupted before they could be completed.

Two former militants were assassinated in the Netherlands in 2015 and 2017. A self-exiled former intelligence officer was shot in Istanbul, Turkey in 2019.

European authorities foiled a terrorist bombing plot against the 2018 Free Iran gathering In Villepinte, France. The bombing was intended to target National Council of Resistance of Iran (NCRI) President-elect Maryam Rajavi. Thousands of MEK members were in attendance, as were dozens of prominent politicians from around the world.

(NCRI) and (PMOI / MEK Iran): foiled several attacks on dissidents in France and Ashraf 3, the MEK’s headquarters in Albania.

Albanian authorities have foiled several attacks on Ashraf 3, the MEK’s headquarters in Albania.

According to the Freedom House report, the Iranian regime used renditions to silence critics living abroad. It cited Ruhollah Zam as an example. Zam was an Iranian journalist living in exile in France to avoid imprisonment for publishing news that was critical of the regime. Zam continued to run his website and Telegram channels while in France, angering regime officials.

Zam was lured to Iraq in 2019 and kidnapped by Revolutionary Guards (IRGC) agents and forcibly brought back to Iran. He was then made to stand trial and was convicted of charges stemming from his journalism. Zam was executed in December 2020, despite pleas from the international community.

#MEK and #NCRI reported that the response to the latest execution in #Iran of a French resident, Ruhollah Zam, by several European nations, including France, Germany, Italy, and Austria, withdrew from the Europe-Iran Business Forum. https://t.co/X1jRE40moy

Kidnapped by (IRGC) agents and forcibly brought back to Iran

“The Iranian state’s transnational repression reaches far beyond those who have been kidnapped, killed, or detained, exerting other forms of pressure on anyone involved in opposition politics or independent journalism,” the report said.

According to Freedom House, Iran’s tactics against dissidents “collectively amount to a constant barrage of harassment, intimidation, and surveillance.”