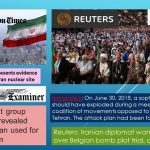 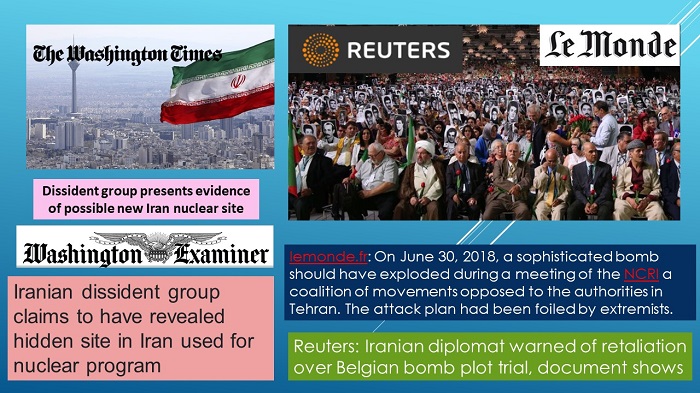 The Washington Times reported that the NCRI and (PMOI/ MEK Iran), reveals evidence of a likely new Iran nuclear site, In fact, there is evidence to prove that Iran already has a new nuclear bomb-making facility.

Throughout the past fortnight, the international media has widely covered the Iranian Resistance’s,  the National Council of Resistance of Iran’s (NCRI), and the People’s Mojahedin Organization of Iran (PMOI / MEK Iran), activities. Also, many of the international media like Le Monde and the Reuters reported the nearing trial of the Iranian regime’s terrorist-diplomat, Assadollah Assadi, in Belgium, and that if convicted the surrounding areas may experience terrorist attacks.

The Washington Times reported that the main dissident group, the MEK, reveals evidence of a likely new Iran nuclear site, In fact, there is evidence to prove that Iran already has a new nuclear bomb-making facility.

The National Council of Resistance of Iran (NCRI), which is a reputable French- and Albanian-based group that lobbies for the overthrow of Iran’s government, said on Friday it now has details of what is an unknown weapons development facility in the northeast region of Sorkheh-Hesar.

The group, which is in exile from Iran and now has its base in Europe, said that the new site can be found east of Tehran in the Sorkheh Hesar region. The NCRI said that construction has been ongoing since 2012, and in about 2017, groups linked with the Iranian Ministry of Defense’s Organization of Defensive Innovation and Research started to move into the facility.

Alireza Jafarzadeh, who is the deputy director of the National Council of Resistance of Iran’s Washington office, told the Washington Examiner that his organization has already shared the data about the supposed new site with U.S. officials and with the International Atomic Energy Agency.

Last month, when speaking at the United Nations General Assembly, Israeli Prime Minister Benjamin Netanyahu said that Iran will have sufficient nuclear material to be able to manufacture two atomic bombs that will only take a few short months to complete.

Iran has been facing crippling sanctions by the U.S. because of its nuclear program, and following its withdrawal from the 2015 nuclear deal, the Trump administration launched a so-called “maximum pressure” campaign against Iran hoping to get it to toe the line regarding the production of nuclear weapons.

Alireza Jafarzadeh, deputy director of the National Council of Resistance of Iran’s Washington office, said that U.S. officials should share the knowledge with the International Atomic Energy Agency.

He also said, “The IAEA should be provided access to the site immediately before the regime razes the buildings and sanitizes the place.”

When the IAEA was contacted by the Washington Examiner, a spokesman said that new about the reports of the new site, but “in line with standard safeguards practice, the Agency does not comment on such reports.”

The information regarding this new site was gained from the People’s Mojahedin Organization of Iran (PMOI / MEK Iran), sources inside Iran, which acted secretly within the Iranian government to get information about Iran’s nuclear program, Jafarzadeh reported.

.@dcexaminer: Alireza Jafarzadeh, [dep dir of the NCRI-US]… told the Washington Examiner after the event that his organization has already shared the data about the alleged new site with U.S. officials and with the IAEA.@A_Jafarzadeh #Iran #Nuclearhttps://t.co/UjUCH9F1tc

The Washington Examiner tried to get additional information from the White House about the report of the military site and was told to contact the State Department, which did not quickly respond.

Since President Trump withdrew the U.S. from the Iran nuclear deal, known as the Joint Comprehensive Plan of Action (JCPA) in 2018, Iran has continued to increase and build up its nuclear capabilities.