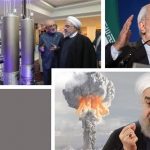 The Nuclear Deal With Iran Was a Failure From the Start

Written by Mohsen Aboutalebi on January 1, 2021. Posted in MEK (PMOI) IN MEDIA

When questioned about its appeasement towards the theocratic Iranian regime, the Iran Task Force of the EU’s External Action Service (EEAS) prefers to confirm that “the EU remains fully committed to the complete and effective implementation of the Joint Comprehensive Plan of Action (JCPOA) by all sides.” They boast that “the agreement is a key element of the global nuclear non-proliferation architecture and is a key achievement of multilateral diplomacy as endorsed by the UN Security Council Resolution 2231 (2015).”

The Iran Task Force also says that the EU is dependent on the International Atomic Energy Agency’s (IAEA) monitoring of Iran’s nuclear activities when it evaluates Iran’s nuclear program.

When in doubt, the Iran Task Force states that their boss, Josep Borrell, as the EU’s High Representative for Foreign Affairs and Security, and as Coordinator of the JCPOA Joint Commission, will continue to do what it can to preserve and fully implement the nuclear deal by all, as it is necessary for preventing non-proliferation and for promoting regional security which is in the interests of all.

All that is going on shows why Tehran regards the West with contempt and does exactly what it wants. The mullahs have used their skills to ensure that the nuclear deal stopped the IAEA from gaining access to all of Iran’s military sites in Iran and it is at these places where the nuclear and ballistic missile program has continued without being exposed.

JCPOA deal  ignores the will of the Iranian people

The deal never mentioned the Iranian regime’s hostile expansionist policies in the Middle East and their sponsorship of global terrorism. The JCPOA has done nothing about the mullahs’ appalling record of oppression and human rights abuses within Iran.

It was due to these reasons that President Trump took America out of the JCPOA deal and imposed the ‘maximum pressure’ campaign of sanctions against the Iranian dictatorship. When President-elect Joe Biden becomes established in the White House, the theocratic regime will be seeking the opportunity to end the sanctions which have stopped them from providing funds to the following groups:

They are hoping also for a revival of the nuclear agreement, subject to the ending of the ‘maximum pressure campaign’ by the US. If Joe Biden and his nominee for Secretary of State, Tony Blinken, feel tempted by this offer, they should study the text of the 2015 JCPOA agreement. The deal was based on Iran’s promise to behave and not a cast iron and verifiable monitoring mechanism.

The agreed terms of the inspection of nuclear operations omitted the “anywhere, anytime” factor. Under the JCPOA Annex, 1 – Nuclear Related Commitments, Clause Q. ACCESS, page 23, the discusses “good faith”, making sure it doesn’t aggravate the mullahs, by stating that inspections will be “kept to the minimum necessary… and not be aimed at interfering with Iranian military or other national security activities”…

In June 2012, a US security institute revealed new satellite imagery that showed “sanitization” and “excavation work” at the Parchin military site before the IAEA’s inspection date. IAEA Director General Yukiya Amano at the time said satellite images showed that buildings were being demolished and soil was being removed at Parchin, which is situated about 30 km (20 miles) southeast of Tehran. Yukiya Amano expressed “serious concerns about suggestions Iran would inspect its own Parchin military site on the agency’s behalf. Iran stressed its nuclear program had no military dimensions and declared the site off-limits.”

On September 21, 2015, the IAEA director told the Board of Governors that a day earlier he had visited a suspicious site in the Parchin Military Complex in Iran. However, Iranian authorities and state media told their audience that no (foreign) inspectors were permitted to enter Parchin and that any samples taken were from just 7 locations. They also said that Yukiya Amano’s visit with his deputy was generic and just ceremonial as they didn’t bring along any equipment and didn’t even carry a phone.

Their actions show how unreliable the clerical regime is. A US State Department Special Representative for Iran, Elliott Abrams, revealed in a webinar on Dec 15th that the Iranian regime had preserved and concealed a large amount of documentation from its nuclear weapons program, while at the same time keeping many of its “original weapons and scientists working together on dual-use technologies.”

The latest IAEA report stated that Iran’s low enriched uranium (LEU) stock is now 12 times more than the limit set in the JCPOA. The Institute for Science and International Security summarized by saying that Iran now has enough low enriched uranium to produce sufficient weapons-grade uranium for a 2nd nuclear weapon, where the 2nd one could be produced far more quickly than the first. Iran would require just 5.5 to 6 months to produce adequate weapons-grade uranium for two nuclear weapons.

Mr. Josep Borrell should remember that when he meets Zarif eventually, this is the man who boasted about #Iran being the “greatest democracy on Earth.” Presumably, in Zarif’s warped views, the highest execution rate is a sure sign of democracy.https://t.co/Gzcups89z3 #MEK pic.twitter.com/phPbFR3ZL6

When a verdict is released for the trial in Belgium of an Iranian diplomat who was caught transporting a bomb to a mass Iranian opposition the People’s Mojahedin Organization of Iran (PMOI / MEK Iran), and the National Council of Resistance of Iran (NCRI), rally just outside Paris in 2018, it will be quite clear that this attack came from orders under orders from the highest echelons in Tehran. That fact alone should be enough to cause the US and the EU to re-think its Iran strategy. Iran is a pariah regime. Trying to raise the failed nuclear deal from the grave will be a catastrophic mistake.

If the EU and the U.S. put human rights on the table for negotiations, it would change the dynamic of the discussion. Openly talk about the suppression of protesters and the People’s Mojahedin Organization of Iran (PMOI / MEK Iran). Let them know that international communities know what they are doing and why? Then renegotiate the terms of the JCPOA with provisions for human rights. If the regime wants to walk away, then the international community can sleep at night knowing it is not doing business with people who are comfortable with torture and terrorism.
Make a good deal or don’t make one at all.

The abridged version of an article written by Struan Stevenson for the NCRI.