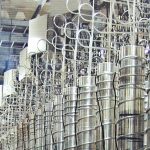 The Iranian regime announced that it will begin the next phase of its rollback to the 2015 Joint Comprehensive Plan of Action (JCPOA) known as Iran Deal- June 17, 2019

The Iranian regime’s Atomic Energy Organization announced on Monday that it will begin the next phase of its rollback to the 2015 Joint Comprehensive Plan of Action (JCPOA), also known as the Iran nuclear deal. The regime will restart work at the Arak heavy water reactor facility as part of the latest reduction in its commitment to the deal.

The regime announced in April that it would no longer honor some of the terms of the JCPOA. Following this announcement, regime officials stated that Iran had quadrupled its production of low-enriched uranium.

The regime in #Iran never had the intention to abide by the 2015 nuclear deal, known as the JCPOA.https://t.co/bl5sFDVPsL

On May 8, 2018, the United States withdrew from the JCPOA, citing evidence that the regime was not in full compliance with its terms. The U.S. reimposed pre-2015 oil sanctions and tightened restrictions on imports of petrochemical products from the Iranian regime. Despite Europe’s efforts to save the deal, no country has been able to import oil without using the U.S. financial system and thus falling afoul of U.S. sanctions.

On the anniversary of the U.S. withdrawal from the JCPOA this May, regime President Hassan Rouhani announced that Iran was withdrawing from the JCPOA and would no longer honor the terms of the deal.

A report aired on state-run television reported the news. “The Supreme National Security Council issued a statement in which it declared to the member states of the JCPOA that starting today, May 8, 2019, Iran will stop its measures under the agreement and will give a 60-day window to the countries remaining in the deal to implement their commitments, especially in the domain of banking and oil,” said the report.

The statement by the regime’s Security Council specifically noted that it would no longer restrict its production of enriched uranium or adhere to the restrictions on its heavy water stockpile. It also threatened that the regime would respond if its nuclear dossier were to be presented to the United Nations Security Council.

European Leaders Respond to the Regime

European officials were quick to react to the regime’s actions. On May 9th, the UK, French, and German Foreign Ministers, along with the EU Foreign Policy Chief, issued a joint statement declaring that Europe would not accept the 60-day ultimatum offered by Iran. The statement also reminded the Iranian regime of its commitments under the terms of the JCPOA.

French Foreign Minister Jean-Yves Le Drian went further, warned the regime that resumption of its nuclear program would place Iran in breach of the JCPOA.

French President Emmanuel Macron gave a press conference on May 9th in which he stated that the JCPOA should be strengthened with complementary agreements that would address the regime’s ballistic missile program and its destabilizing activities in the Middle East.

Surprise and Complaints from the Regime

The Iranian regime was unprepared for the strong reaction from European officials. Until the May 8th announcement, EU leaders had hoped to bypass U.S. sanctions with an alternative payment system known as INSTEX. The financial tool would have allowed oil transactions to pass from European countries to the Iranian regime without going through U.S. banking institutions.

When the regime did not get the expected appeasement from the EU, it resorted to resentful complaints about the failure of INSTEX. Keyhan, a representative of regime Supreme Leader Ali Khamenei, wrote, “We shouldn’t expect Europe to have the will to even launch a useless financial channel.”

MEK sources inside Iran initially uncovered the regime’s nuclear program at great personal risk, leading to the pre-2015 sanctions. The MEK supports a non-nuclear Iran as part of its political platform.