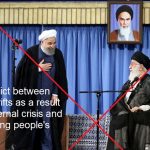 MEK Iran: Khamenei’s Speech Shows That the Iranian Regime is in Conflict

Written by Amineh Qaraee on December 20, 2020. Posted in NEWS

(PMOI / MEK Iran): A surge in the infighting between the Iranian regime supreme leader and its president Hassan Rouhani inters new stage, as an internal crisis and people’s protests expand.

The National Council of Resistance of Iran (NCRI), and the People’s Mojahedin Organization of Iran (PMOI / MEK Iran), reported that Ali Khamenei, the Mullahs Supreme Leader, has been making contradictory speeches recently, revealing a growing conflict within the ruling Iranian theocracy. The latest serious conflict that has arisen is about the continuation or lifting of sanctions.

The (PMOI / MEK Iran) report that on November 24th Khamenei said that sanction lifting should not be pursued. But a month later, in a speech he made on December 16th, nearly a year after Qassem Soleimani was assassinated, he changed his mind. “I do not say ‘don’t try to lift sanctions.’ If we could get rid of sanctions, we should not delay even an hour,” he was reported saying.

#Khamenei showed himself under the pretext of meeting with #QassemSoleimani's family to say that he was NOT dead
Criticized #Rouhani & admitted escalating infightings reaching the top of regime hierarchy #iran #sanctions pic.twitter.com/sK8ltvji2l

This is the dilemma faced by Khamenei and others in the regime. The Iranian economy is certainly suffering as a result of the sanctions. The economy is suffering from “the worst inflation and living conditions after the revolution, according to economic statistics,” according to a report in the state-run Vatan-e Emrooz daily.

The regime knows that if the economic deadlock is not removed, there could be a far greater uprising than has occurred up to now. “Exhaustive living conditions with public discontent and distrust have severely reduced social resilience,” was a quote from a report in the semi-official ISNA news agency.

What has been the turning point?

The assassination of Qassem Soleimani by the U.S. Trump administration and the November 2019 uprising have been the two most significant factors in changing the balance of power in Iran and have led to a greater desire to remove the hated theocracy and replace it with a democratic alternative, lead by the National Council of Resistance of Iran (NCRI), and the People’s Mojahedin Organization of Iran (PMOI / MEK Iran). 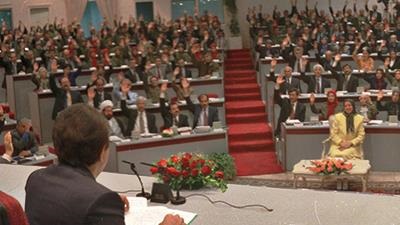 The National Council of Resistance of Iran (NCRI), elected Mrs. Maryam Rajavi as the President-elect for the transitional period after the mullahs’ overthrow

The dilemma the regime faces is that to improve the outlook for the economy, sanctions must be lifted, but this won’t happen unless the regime gives up its determination to use its terrorist activity abroad and pursuing the development of nuclear weapons.

As the German Foreign Minister has said: “We have clear expectations for Iran: no nuclear weapons, but also no ballistic rocket program which threatens the whole region.”

According to Heiko Maas, the German Foreign Minister, European powers do not trust the Iranian regime.

FM @HeikoMaas after meeting with @SecPompeo: although our views on the #JCPoA differ, we have the same objectives. No nuclear weapons for Iran, and a different role for Iran in the region. It is important for us to communicate on this issue as well and as often as we can. pic.twitter.com/eaXLwcA4nE

The regime has shown no sign of giving up either its terrorist adventures or its nuclear ambitions and equally has shown no interest in improving the lives of ordinary Iranians or protecting them from Covid-19. The  People’s Mojahedin Organization of Iran (PMOI / MEK Iran) and the National Council of Resistance of Iran (NCRI), reported that some 188,100 people have now died from coronavirus in Iran.

The fact that this is leading to a greater incidence of protests is causing a massive conflict within the regime over how they should handle it.

Again, Khamenei’s recent statements reveal its internal conflict. On the one hand, he urges officials to work together, while at the same time he attacks the opposing faction within the regime led by Hassan Rouhani.