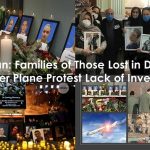 Written by Mohsen Aboutalebi on December 18, 2020. Posted in NEWS 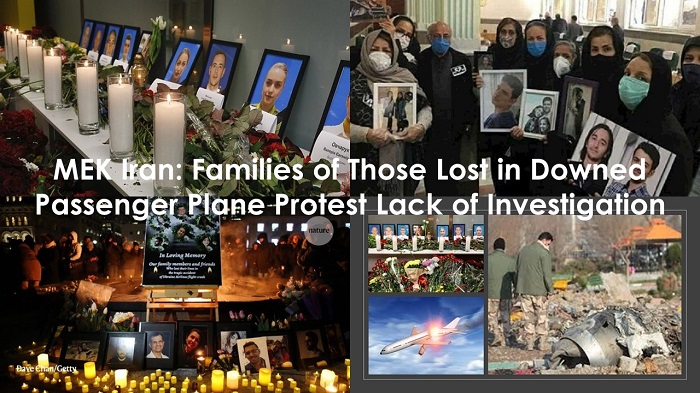 (PMOI / MEK Iran): Families of those lost in the downed passenger plane, expressed their outrage that regime officials have conducted no investigation into the incident, even though it is 12 months since the event took place.

The National Council of Resistance of Iran (NCRI), and the People’s Mojahedin Organization of Iran (PMOI / MEK Iran), reported that the family members of those passengers who lost their lives when a passenger plane was shot down by the Iranian regime’s Revolutionary Guards (IRGC) in January came together last Monday at Tehran’s Military Court. They expressed their outrage that regime officials have conducted no investigation into the incident, even though it is 12 months since the event took place.

The families expressed that the regime was ignorant and had covered up the truth behind the terrorist act which killed 176 passengers and crew.

#Iran: “We are living in darkness”: Families of downed passenger plane protest lack of investigation#WeStand4FreeIran #Iranianhttps://t.co/OuOvi7vTJ1

It wasn’t until January 11th that the regime decided to admit that the Ukraine International Airlines flight PS752 was shot down by its military units.

At a Military Court meeting, Maryam Malek’s father, who died in the crash, criticized the judge using the following words: “How can a bunch of criminals participate in this investigation? A year has passed! We are living in darkness!” and “Mr. Prosecutor! Tell us what you have done to prevent the looting of the personal belongings of our children?”

September 17 – Near Shahriar, west of Tehran, #Iran
Family members of the Ukraine International Airlines #PS752 victims laid flowers at the site where the passenger plane crashed after being shot down by the regime's IRGC shooting surface-to-air missiles. pic.twitter.com/yqgN4R1SWA

It seems because of the nature of the regime how could anyone expect such criminals known for their constant breach of human rights to bother to investigate their own crimes. After all the regime has held power for the last 42 years and has never admitted to doing anything wrong. It didn’t even reveal how many peaceful protesters it massacred in November 2019 when a national uprising took place. They have never revealed exact figures of the numbers killed, arrested, and injured and no independent organization has investigated it either. Reuters confirmed in a special report on December 23, 2019, about the deadly crackdown on November nationwide protests in Iran the death toll of 1500 that was announced by the People’s Mojahedin Organization of Iran (PMOI / MEK Iran) on December 15, 2019.

What outraged families of those killed that they were not even allowed to hold funerals for their dead loved ones.

No investigation into the 1988 massacre

32 years ago 30,000 prisoners were massacred after a fatwa issued by supreme leader Ayatollah Khomeini, many of the victims were either members or supporters of the People’s Mojahedin Organization of Iran (PMOI / MEK Iran). There has never been a full investigation into this event.

Recently, a number of United Nations human rights experts sent a letter to the Iranian regime warning it for its cover-up of the 1988 massacre telling them it believed they had committed crimes against humanity. The letter was eventually made public because there had been no response to it after 60 days.

This indicates that dictators in Iran cannot be trusted to conduct investigations into their own crimes. The Iranians have had to endure this type of regime for 40 years. It is time now for the international community to stop trusting the regime and demand it investigates its crimes against its own people.

Mrs. Maryam Rajavi the President-elect of the National Council of Resistance of Iran’s (NCRI): Those responsible for the slaughter of innocent passengers of an airliner must be prosecuted and punished. Ali Khamenei, as the Commander-in-chief of the Armed Forces, Hassan Rouhani, the mullahs’ president, and IRGC commanders are responsible for this horrific crime.