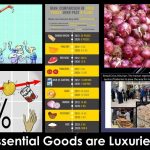 Written by Mohsen Aboutalebi on December 10, 2020. Posted in NEWS

(PMOI / MEK Iran): The Iranian people do not believe the regime’s lies, which is why they took to the streets in protest in 2019, to demand regime change. They know that the regime cannot fix this mess, even if the mullahs wanted to.

According to the reports by the  People’s Mojahedin Organization of Iran (PMOI / MEK Iran), and the National Council of Resistance of Iran (NCRI) essential goods now have a luxury price tag in Iran, which means that ever fewer people are able to afford things like meat and dairy, and many are forced to buy bones to make broth or scoop out the marrow.

The semi-official ILNA news agency wrote last month that “70% of workers are underemployed” and cannot afford meat of any kind.

To give you some idea of the price increases:

#Iran's regime has mismanaged the country’s economy 4decades. Its widespread corruption found at all levels of leadership and its severe incompetence has created economic hardships for the people.#MEK https://t.co/LTLaKGDtvG

(PMOI / MEK Iran) supporters from different parts of Iran are saying that the prices rose, so did poverty with the poverty line now set at 10 million Tomans ($385) and minimum wage at 2 million Tomans ($77). In the past three years, incomes have dropped by a third, while housing rose seven times, cars ten, and gold 18 times.

Now, the regime tries to blame the international sanctions that were imposed because of Iran’s nuclear program or other malign behavior, but the Statistics Centre notes that this food price hike began about a decade ago, predating the sanctions by 3-8 years. The real reason, which is even acknowledged by some officials and state media, is mismanagement and corruption.

Said Lilaz, an official close to Hassan Rouhani’s faction, said that $30 billion had “vanished in the banking network” since January, calling it a “despicable lie” that inflation is caused by sanctions.

Iran’s Bread Shortage: What is the Cause? #NCRI and #MEK reported that the #Iranian people are suffering a bread shortage, which has resulted in a major increase in the price of this basic food, something that happens every autumn in #Iran #FreeIran2020 pic.twitter.com/I2RNv9qnfI

While economist Ehsan Soltani said: “With $280 billion in foreign exchange in the last two years, we should have been able to run the country for five years without suffering a currency shock. The factors that resulted in the rising dollar exchange rate show there has been a huge corruption of exports and the currency price.”

(PMOI / MEK Iran) do analyses asking where has this money gone? To fund terrorism abroad and domestic oppression. The regime sold out the country to maintain a shaky grasp on power. No wonder Iran’s misery index has increased by 40% in eight years, according to the state-run Sabzineh outlet.

The Iranian people do not believe the regime’s lies, which is why they took to the streets in protest in 2019, to demand regime change. They know that the regime cannot fix this mess, even if the mullahs wanted to.

Those protests shook the regime to its core because the mullahs realized that the people were capable of toppling them and would do so soon.

In its newest report, the Statistical Centre of #Iran announced that the price of 32 food items had increased by 41% compared to last year. pic.twitter.com/BLt7DOMz3a

Mrs. Maryam Rajavi the President-elect of the National Council of Resistance of Iran’s (NCRI): The Nov 2019 uprising was a genuine example of a revolt to overthrow the regime. Its driving force was the deprived but aware youths inspired by Resistance Units. It was an example that implemented the (PMOI / MEK Iran) strategy of Resistance Units and Rebellious Cities.

The Nov 2019 uprising was a genuine example of a revolt to overthrow the regime. Its driving force were the deprived but aware youths inspired by Resistance Units. It was an example which implemented the PMOI/MEK strategy of Resistance Units and Rebellious Cities. #IranProtests pic.twitter.com/Y42WdRBpC4