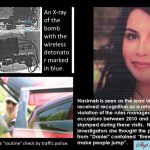 Written by Jennifer Jones-Kelley on November 28, 2020. Posted in MEK (PMOI) IN MEDIA

The 2018 bombing was intended to wipe out the (PMOI / MEK Iran)’s leaders and chief supporters and demoralize its remaining members. Assadi was in a key position to plan this attack.

The Associated Press (AP) published a story on Friday about the trial of Iranian regime diplomat Assadollah Assadi and three accomplices in the foiled terrorist bombing of the 2018 Free Iran gathering in Villepinte, France. The story was picked up by numerous mainstream news outlets, including ABC News.

The story provides a summary of the 2018 plot targeting the Free Iran gathering and National Council of Resistance of Iran (NCRI) President-elect Mrs. Maryam Rajavi. If it had been successful, Belgian investigators concluded the bombing would have caused mass casualties.

The article also includes details from the two-year investigation into the bombing plot that forms the backbone of Belgian prosecutors’ case against Assadi and his accomplices.

On June 30, 2018, Belgian police stopped Iranian-Belgian couple Amir Saadouni and Nasimeh Naami en route to Villepinte, France. In the trunk of their Mercedes, they discovered 500 grams of TATP explosives and a detonator. A bomb disposal robot sent to detonate the bomb later was destroyed in the process, and a member of the bomb unit was slightly injured.

Prosecutor asked for 20 yrs imprisonment for Assadollah Assadi who plotted to bomb a huge gathering in 2018. According to the New York Times, "The authorities say the target of the plot was the annual convention … outside Paris, of the National Council of Resistance in Iran." pic.twitter.com/7d0xgaBDAD

A third accomplice, Mehrdad Arefani,  was arrested at the site of Free Iran gathering the same day. According to the AP article, he had regime diplomat Assadollah Assadi’s number in his phone. Assadi was arrested by German police the next day attempting to flee to Austria, where he could claim diplomatic immunity. German authorities discovered a red notebook containing instructions on how to construct and detonate a bomb like the one found in Saadouni and Naami’s possession. The notebook also included instructions on how the couple should behave after the bombing.

‘The Potential to Embarrass Iran’

German, French, and Belgian investigators have built a strong case against Assadi and his accomplices, which has “the potential to embarrass Iran,” according to the AP article. Belgium’s intelligence and security agency (VSSE) concluded that Assadi acted on the orders of the regime’s leaders and that he personally brought the explosives to Europe. Investigators regard Assadi as the “operational commander” of the plot.

The VSSE further stated that Assadi is an undercover Ministry of Intelligence and Security (MOIS) agent who operated out of Iran’s embassy in Vienna. Belgian state security believes he was part of Department 312, an arm of the MOIS that deals with internal affairs. Department 312 has been designated a terrorist organization by the European Union.

Starting session of #AssadollahAssadi in Antwerp now.
Mrs. Maryam Rajavi sent a message urging European countries to take a firm action against the entire diplomacy of terror conducted by Zarif, the foreign affairs minister and the intel ministry (MOIS).#FridayLivestream pic.twitter.com/Oh6DCiD1Pt

The Free Iran gathering was not a random choice. The bombing was intended to target Maryam Rajavi and the tens of thousands of MEK supporters present at the event, including dozens of high-profile politicians and dignitaries from around the world. The MEK is the largest and best-organized Iranian Resistance group, and the regime considers it an existential threat. The 2018 bombing was intended to wipe out the MEK’s leaders and chief supporters and demoralize its remaining members. Assadi was in a key position to plan this attack.

The VSSE sent a note to the federal prosecutor in Belgium stating that “the planned attack was conceived in the name of Iran and at its instigation.”

Dimitri de Beco, Assadi’s lawyer, issued a brief statement to the AP contesting the charges against his client. His arguments appear to center on the issue of Assadi’s diplomatic immunity, which was revoked.

Khamenei's campaign of terror against Iranians and democracy is today being shown to the world. pic.twitter.com/LMSyQQ3fnq

“His defense will raise a number of procedural issues, including the question of his diplomatic immunity, since it is not disputed that he had diplomatic status, at least at the time of the facts,” de Beco wrote in a short message, expressing his hope that the court case won’t be a ‘political trial,’” said de Beco.