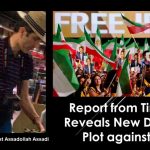 Written by Jennifer Jones-Kelley on November 17, 2020. Posted in MEK (PMOI) IN MEDIA, NEWS

The London-based Times daily’s website published an article on November 14 detailing the case against Iranian diplomat Assadollah Assadi and his accomplices in their impending trial on terrorism charges in Belgium. The article provides a timeline of the events leading up to the foiled terrorist bombing attack on the 2018 Free Iran gathering in Villepinte, France, and includes damning evidence that Assadi masterminded the plot under orders from the highest levels of the regime. Belgian investigators believe the planned attack was an attempt to assassinate National Council of Resistance of Iran (NCRI) leader Mrs. Maryam Rajavi, thus severely weakening the People’s Mojahedin Organization of Iran (PMOI / MEK Iran) and Iranian Resistance.

A Vow of Retribution

The plot to bomb the Free Iran rally was conceived after the December 2017/January 2018 Uprising in Iran. The nationwide anti-regime protests took place in 142 cities in all 31 provinces for almost two weeks before security forces were able to violently suppress the outraged citizens of Iran. Protests continued on a smaller scale throughout 2018. Supreme Leader Ali Khamenei acknowledged the role of the MEK in organizing and leading the protests and vowed retribution.

Assadollah Assadi, a regime diplomat stationed in Austria, was chosen to plan the attack against the NCRI shortly after Khameini’s vow. In addition to his role as a diplomat, he also served as a Ministry of Intelligence and Security (MOIS) agent and had knowledge of explosives. Assadi then recruited Amir Saadouni and his wife, Nasimeh Naami to plant the bomb with a fourth accomplice, who will also stand trial this week.

Jaak Raes, head of the VSSE, Belgium’s state security service, wrote a letter to the federal prosecutor in Belgium describing Assadi’s role in the plot. “The plan for the attack was conceived in the name of Iran and under its leadership. It was not a matter of Assadi’s personal initiative,” he explained in one section of the document.

Jaak Raes — the head of the Belgian State Security Service [VSSE]: "Not my Job to Monitor Foreign Spies!" https://t.co/SnuEzDhyoW via @wordpressdotcom pic.twitter.com/tdzAZo9E2d

Saadouni and Naami agreed to deliver the bomb to the NCRI gathering and met with Assadi several times. In March, Assadi met with Saadouni on a train in Austria and talked about the rally. He “said he wanted to do something with the device,” according to Saadouni.

Assadi clarified that the device first needed to be tested and then traveled to Iran several times, according to the Times article. He returned from the last trip on June 22. He most likely carried the bomb back with him then. His diplomatic pouch would not have been searched.

On June 28, Assadi met Saadouni and Naami at a Luxembourg Pizza Hut and handed them a package, which Naami put into her purse before returning to their car. The package contained 500 grams of TATP explosives and payment of €11,710. The exchange was observed by plainclothes officers who had been tracking the operation, after being tipped off by a partner agency (most likely Mossad, according to the Times article).

Assadi texted Saadouni and Naami later the same day to confirm the device was ready. They planned to meet up again one day after the attack.

"Belgian investigators are convinced their actions were approved at the highest level in Tehran, which would make their conviction a serious embarrassment for the Iranians." writes @TheSundayTimes 4/

The Arrest and Investigation

Saadouni and Naami were arrested on June 30  near Brussels with the explosives and a detonator concealed in their luggage. Dovo, Belgium’s bomb disposal unit, described the bomb as quite sensitive. When it was detonated in a controlled environment, it destroyed a remote-controlled robot and injured a Dovo officer. Investigators have said that if the bomb had gone off at the Free Iran rally, there would have been mass casualties.

Assadi was arrested the following day in Germany as he tried to flee to Austria, where he hoped to claim diplomatic immunity. He was extradited to Belgium over the protests of the Iranian regime, and his diplomatic immunity was revoked.

Assadi was carrying a red notebook in his vehicle when he was arrested. It contained detailed notes to the bombers on how to assemble and detonate a bomb and what to do after the attack.

The Times article contains concrete evidence that an Iranian regime diplomat planned a terrorist attack in Europe on a dissident group that, if successful, would have caused mass casualties. There is no stronger argument that the Iranian regime is a state sponsor of terrorism than this.

Throughout the past fortnight, the international media has widely covered the Iranian Resistance’s,  the National Council of Resistance of Iran’s (NCRI), and the People’s Mojahedin Organization of Iran (PMOI / MEK Iran), activities. Also, many of the international media like Le Monde and the Reuters and Alhurra and Express and WSJ reported the nearing trial of the Iranian regime’s terrorist-diplomat, Assadollah Assadi, in Belgium, and that if convicted the surrounding areas may experience terrorist attacks.

Throughout the past few weeks, the international media has widely covered the Iranian Resistance’s,  the (NCRI), and the (PMOI / MEK Iran), activities, like Le Monde, Reuters, Alhurra, Express, WSJ, …