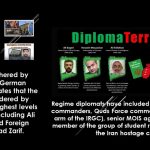 Written by Mohsen Aboutalebi on November 23, 2020. Posted in NEWS 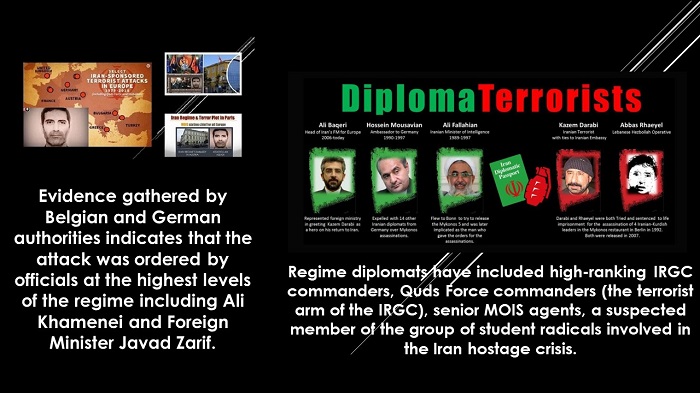 The terror plot in June 2018 must be seen in context. It followed several major protests and uprisings within Iran in both 2017 and 2018. 2018 was what Mrs. Maryam Rajavi, the NCRI leader, called a “year full of uprisings.” The regime in Iran has blamed the Iranian opposition and especially the (PMOI / MEK Iran) for organizing these protests which explains why they were so desperate to annihilate the leadership, conveniently all together at the June 2018 rally at Villepinte.

The upcoming trial of Iranian diplomat-terrorist, Assadollah Assadi, and his three accomplices in Antwerp, Belgium, is expected to reveal the link between the would-be bombers and the real masterminds behind the terror plot which were those in Tehran, like the Supreme Leader, Ali Khamenei, and President, Hassan Rouhani.

Those who may have been killed or maimed by the attempted bombing of the NCRI’s Free Iran Rally in Villepinte, near Paris in June 2018 are hardly going to be surprised by the expected revelations.

Belgian investigators have already received confirmation that the Iranian regime was complicit in the terror lot as a statement from the state security head in Iran stated that “the plan for the attack was conceived in the name of Iran and under its leadership. It was not a matter of Assadi’s personal initiative.” Most casual observers would accept the fact that a government representative in the form of an Iranian diplomat was sufficient to implicate the government that sent him there.

Robert Joseph, a U.S. ex-ambassador, a participant at the 2018 rally has said: “based on my knowledge of the involvement of the regime in terrorism and on available information, in this case, it is clear to me that the planned attack was not an isolated act by a rogue element within the Iranian government.”

Former U.S. Senator, Robert Torricelli, also one of those who were present at the rally and a potential victim of the terror plot said in his affidavit to the trial: “there is no doubt that the terrorist plot was decided and planned at the highest level of the Iranian regime. This is a case of state terrorism, where diplomatic privileges have been used to facilitate a terrorist act on European soil.”

If the leaders of free societies fail to hold the perpetrators responsible, we will only encourage more attacks and be complicit in them,” Joseph went on to say in his affidavit.

Both Joseph and Torricelli used their affidavits to show their support for the National Council of Resistance of Iran (NCRI), the main target of the bomb plot. The two men have long been acquainted with the activities of the Iranian regime and although not surprised that the regime would have tried to attack what it regards as an enemy, they are still shocked that the terror attack could have potentially killed so many people in European soil.

The regime has been becoming more and more desperate in its attempts to thwart what it perceives as a growing threat against its existence and control over Iran. Their desperation has led it into thinking that it could get away with a terror attack of the magnitude planned in the heart of Europe, a part of the international community that has tolerated the excesses of the regime for far too long.

The terror plot in June 2018 must be seen in context. It followed several major protests and uprisings within Iran in both 2017 and 2018. 2018 was what Mrs. Maryam Rajavi, the NCRI leader, called a “year full of uprisings.” The regime in Iran has blamed the Iranian opposition and especially the (PMOI / MEK Iran) for organizing these protests which explains why they were so desperate to annihilate the leadership, conveniently all together at the June 2018 rally at Villepinte.

An Italian Member of Parliament, Antonio Tasso, noted that the Iranian regime had a history of brutal repression, including the slaughter of 30,000 (PMOI / MEK Iran) supporters and members back in 1988. As he said: “I knew that this regime had executed tens of thousands of freedom activists in Iran over the past forty years.” Tasso also mentioned the deliberate gunning down of 1,500 unarmed protesters in the November 2019 nationwide uprising.

The U.N. has already censured the Iranian regime 65 times (now 67) for human rights abuses, Tasso noted. He was still shocked to be told about the regime’s top echelon planning such a massacre as the one at the rally. “What I didn’t know is that the top officials of the Iranian regime had decided to attack the demonstration in which tens of thousands of women, men, elderly, young people, and children participated,” he said. “I tremble because the victims would not have been hundreds but thousands.”

The bomb was expected to have detonated 500 grams of TATP, similar to TNT. It would have had a devastating effect within 100 meters of where the bomb would have been planted. This would have included the prime target, Maryam Rajavi, but would also have meant the deaths of many international political dignitaries who were seated near her at the rally.

It is expected that all four defendants will be convicted at the trial, but opposition figures say that this leaves the real culprits untouched. “I feel strongly that those who were involved must be brought to justice,” said Robert Joseph, alluding to those in the Iranian regime who organized the bombing but are not being tried at the same time as Assadi and the accomplices who had been recruited to do the dirty work for the regime. “We must uphold the values we espouse. If the leaders of free societies fail to hold the perpetrators responsible, we will only encourage more attacks and be complicit in them,” Joseph went on to say in his affidavit.