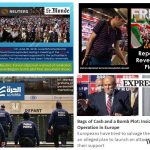 An Iranian regime diplomat that was arrested on terrorist charges is soon to be tried in Europe. The Iranian regime is concerned about what is going to be revealed during the trial and what the consequences will be.

For many years, the Iranian regime has been using diplomats abroad to plot terror attacks, but it is never held accountable.

A state-run publication recently wrote that European countries have started to “engage in diplomatic controversy” towards Iran since the Iranian Resistance’s Free Iran gathering in France in June 2018, organized by the National Council of Resistance of Iran (NCRI) and the People’s Mojahedin Organization of Iran (PMOI / MEK Iran).

The diplomat that will soon be on trial in Belgium was caught giving explosives to a couple who were ordered to use them at the Free Iran gathering just outside Paris. Thankfully the plot was foiled because there were tens upon thousands of attendees, including hundreds of politicians, lawmakers, religious figures, dignitaries, and so on, from both sides of the Atlantic.

European authorities established that this Iranian diplomat, Assadollah Assadi, is not an alone terrorist – he was, in fact, working in coordination with the Iranian regime.

The reason for the terrorist plot was simple – to target the main opposition to the Iranian regime and its leader Mrs. Maryam Rajavi. Over the years, the Iranian regime has tried to make out that the opposition (PMOI / MEK Iran) to the regime has very little following in Iran but now it can no longer make these statements. Not only does the Iranian Resistance (PMOI / MEK Iran) have huge support from the people of Iran, but it also has huge support from influential political figures around the world. Many of these gather at the annual Free Iran gathering to speak about how policies towards the Iranian regime can be changed in their respective countries.

It was a major blow to the Iranian regime when Assadi was arrested and an even bigger blow when European authorities refused to expatriate him back to Iran. Since his arrest, Assadi too has been trying to alleviate the pressure he is under and he even told authorities in Belgium that “armed groups” in Yemen, Lebanon, Iraq, Syria, and Iran would be “watching from the sidelines” so see what side Belgium is going to take.

These threats from an arrested terrorist just further enforce the need for a thorough trial and a firm outcome. The head of Belgium’s state security service has notified the federal prosecutor that Assadi was not only not working alone, but that the “plan for the attack was conceived in the name of Iran and under its leadership”.

The upcoming trial is positive news for the Iranian Resistance (PMOI / MEK Iran) and for the people of Iran because it indicates that European countries are moving towards holding the regime accountable for its belligerence and ending their policies of appeasement that have lasted decades.

Considering the regime’s increasing number of terrorist plots on European soil, it really is essential for all European countries to be firm towards the regime and to send a message that its malign activities will not be tolerated.