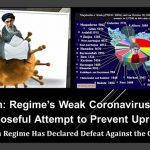 MEK Iran: The Mullahs Regime Has Declared Defeat Against the Coronavirus

Written by Amineh Qaraee on October 31, 2020. Posted in NEWS 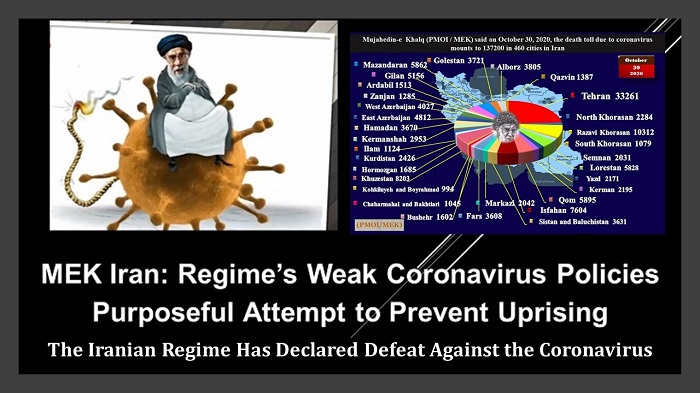 (PMOI / MEK Iran): Khamenei Compares COVID-19 Crisis To Iran-Iraq War Calling It a Blessing, which Khomeini prolonged for eight years, resulted in the death of one million Iranians, injuries to two million, and the displacement of two million other people.

The National Council of Resistance of Iran’s (NCRI), and the People’s Mojahedin Organization of Iran (PMOI / MEK Iran), had received reports that over 137,200 Iranians had died of Covid-19. This figure contrasted as usual with the ‘official’ figure provided by the regime which was 34,478.

The People’s Mojahedin Organization of Iran (PMOI / #MEK) announced this afternoon, Friday, October 30, 2020, that the #Coronavirus fatalities has surpassed 137,200 in 460 cities across #Iran. #COVID19 https://t.co/WC0sSJHbHL

The regime’s own Health Ministry has admitted that the number of deaths and the number of those in ICUs is the highest since the pandemic began in Iran.

Hassan Rouhani, the regime’s president has been trying to cover up the discrepancies between official figures and those obtained by independent sources. “At times there are remarks made in different provinces and by various individuals marking different events in their interviews that confuse the population. Based on the viewpoint of [Iranian regime Supreme Leader Ali] Khamenei, we have appointed a spokesperson and people should only trust the words of this official… this official’s remarks should be the source of our positions,” he said.

The Health Ministry was less than pleased when the regime-held a large ceremony in Mashhad, in which thousands of people attended, ignoring basic social distancing rules. “I am also sorry about the event in Mashhad… everyone claims negligence and apparently only God knows who authorized this event. I cannot believe it, it is truly a crime,” said the spokesperson from the Health Ministry. 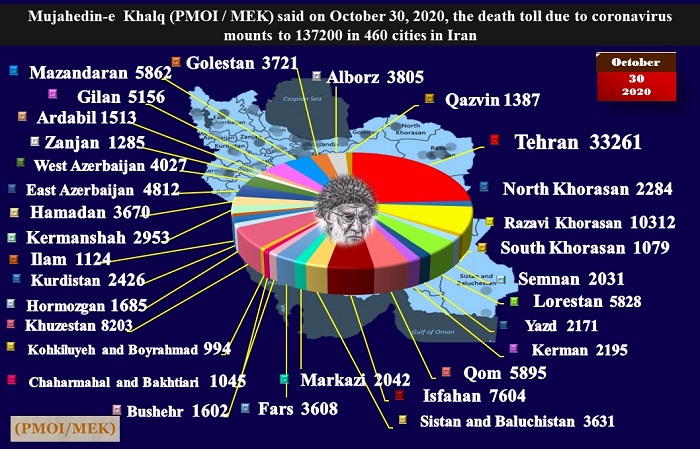 The novel coronavirus has taken the lives of over 137,200 people throughout Iran, according to the Iranian opposition (PMOI / MEK Iran) and NCRI.

Not everyone in the Majlis is prepared to accept the cavalier way the regime is playing with people’s lives. This is what Seyed Nasser Mousavi, one of the parliamentarians said on Wednesday: “Coronavirus, along with mismanagement by the government, is running wild and we have reached the top world rankings in regard to daily deaths. Why should the National Covid-19 Task Force erect a floodgate around the presidency to protect Mr. Rouhani’s life and all the while not think of serious measures for the entire country? Why do they not erect the same type of floodgate to protect ordinary people?”

The head of the Tehran City Council said that the disease had got ahead of the government. Tehran didn’t even have a representative on the national Covid-19 Task Force. “Covid-19 is far ahead of us and we have fallen behind… a country that cannot compensate for people who lose their incomes during lockdowns is forced to end its lockdown conditions. The number of deaths is increasing day by day. Well, we had the information and stats from Tehran’s Behesht-e Zahra Cemetery… we did not have stats from hospitals, but we did have stats from the cemetery, that is more precise than the numbers from the hospitals. It is clear that Covid-19 is defeating us instead of us defeating it. We are still late on decision making,” he said.

More than 137,200 people have died of the novel #coronavirus in 460 cities checkered across all of Iran's 31 provinces, according to the Iranian opposition PMOI/MEK.

The head of Tehran’s Crisis Management Organization, Reza Karami Mohammadi, said: “While in the past eight months, we have lost 33,000 of our compatriots while during the [Iran-Iraq] war, we had 30,000 casualties per year.” He stressed that Iran’s death rate per head of population was one of the world’s highest.

Ghassem Janbabaei, South Khorasan’s deputy health minister, said “In South Khorasan, we’re witnessing a growing trend of Covid-19 cases, and the number of inpatients is increasing. About 80 percent of Covid-19 tests turn out positive, which shows high infection in the city,” according to a report from the IRNA news agency on October 28th.

Meanwhile, in West Azerbaijan, the dean of the Medical Sciences University there said: “in the past 24 hours, there have been 24 registered Covid-19 deaths and the total number of casualties has reached 1,664. There are 1,416 hospitalized patients, 262 of whom are in ICU and 87 are under ventilator support,” according to a report in the Javan newspaper on October 28th.

Khamenei Compares COVID-19 Crisis To Iran-Iraq War Calling It a Blessing#Iran–#Iraq war, which Khomeini prolonged for eight years, resulted in the death of one million #Iranians, injuries to two million and the displacement of two million other peoplehttps://t.co/xmqEgu20ur

A Yazd Medical Sciences University spokesperson said that the number of patients needing oxygen support had gone from 15 percent in the first wave to 85 to 90 percent in the current wave of the pandemic, according to the IRIB news agency on October 28th.

Mrs. Maryam Rajavi, the president-elect of the National Council of Resistance of Iran (NCRI), said that the regime in Iran places no value on human life. She attributes the appalling death rate from Covid-19 in Iran to the fact that the regime is not bothering to suppress the virus but is more concerned with smuggling weapons, developing nuclear missiles, and exporting terrorism overseas.

Mrs. Rajavi says that there is no need for a duplication of the armed forces. The Basij and IRGC should be disbanded and the huge assets acquired by the regime from the people of Iran should be spent on protecting Iranians and funding health workers through this crisis.