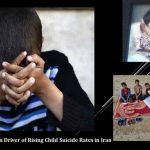 Written by Esmail Mohades on October 29, 2020. Posted in NEWS 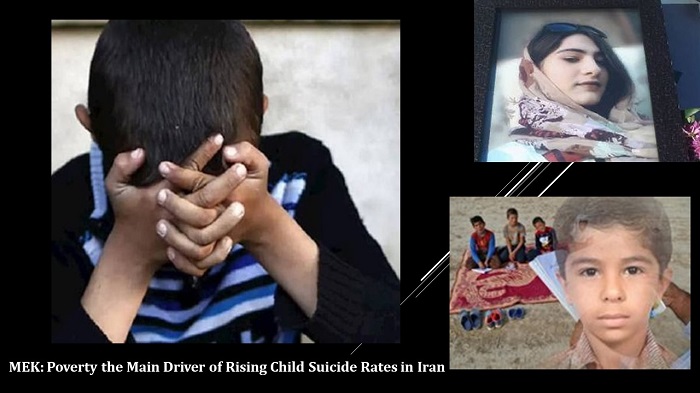 (PMOI / MEK Iran): How can the regime not see that the solution is not to protect the wealth of rich people, but the lives of society’s most vulnerable? Maybe they do know deep down that that is the purpose of government or maybe they’re so morally bankrupt that they don’t get it. Whatever the case, it is clear that the mullahs will never change.

Any suicide is a tragedy, but the saddest of all are child suicides. Unfortunately, increasing poverty in Iran has led to a child suicide rate increase which appears to be spiraling out of control.

The National Council of Resistance of Iran’s (NCRI), and the People’s Mojahedin Organization of Iran (PMOI / MEK Iran) reports that the majority of children and adolescents who take their own life are from disadvantaged and poor backgrounds. State-run media has been forced to address the issue because of the widespread scale of it, even if it puts the governing regime in a bad light.

Children who take their own lives feel that the future is too bleak. They see the wastage of the lives of their parents and the blight that poverty creates and can see no hope of improvement in the near future for themselves. A few examples are given below:

Yet another child in #Iran is dead after committing suicide.#Poverty prevented her from having a smartphone & necessary equipment to take part in online classes during the coronavirus pandemic.https://t.co/bMTPmUuLyJ

The Ministry of Health and related organizations do not publish the exact numbers of suicides and the reasons for them. The ministry is particularly coy when it comes to releasing statistics of youth suicides, presumably because it is rightly embarrassed by them.

A government spokesperson,  Mustafa Eghlima, was quoted by the Bartarinha website as saying: “Statistics will not be announced unless made public. Of course, after a while, the noises fall asleep again. The government does not provide statistics, and many families do not report the cause of their child’s death as a suicide. Even for the coronavirus, accurate statistics are not provided.”

The Tasnim news agency recently gave a full and succinct description of some of the reasons for the increasing suicide rate in Iran in the following article published by them:

“The presence of wealthy people in important centers of power, where macro-social and economic decisions are made, confirms that poverty, although measured by economic indicators with a social manifestation, is a phenomenon related to policy-making and politics.

Another child committed suicide in #Iran due to #poverty & not affording a smartphone for online classes.

All the while the regime funds:

“In such a way that some of those sitting on the path of management either own large capital or use it in the influence of the owner of capital, policies, and decisions are naturally laid out in such a way that the distribution of national capital and revenues is diverted from its fair form and is directed to the pursuit of specific and limited group interests.

“And what reaches the other strata, according to their relation to the center of the capital, becomes less and less to the point that some people reach a very small share, equal to zero.”