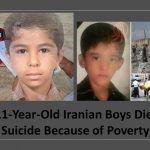 Written by Amineh Qaraee on October 15, 2020. Posted in NEWS 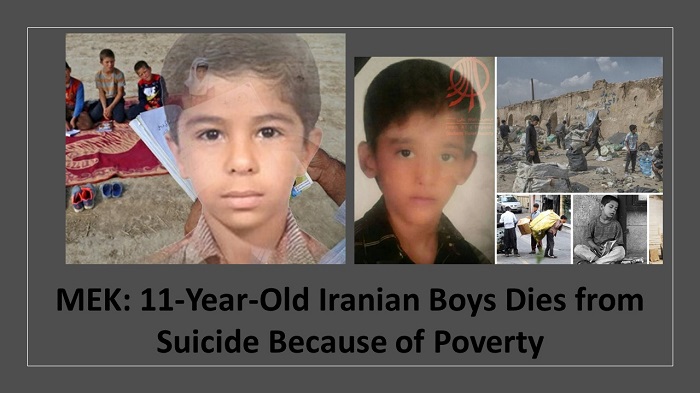 In response to this desperate situation, people have no other option but to resist a decent and better life. ٔNCRI and (PMOI / MEK Iran) and MEK resistance units are mobilizing people to restore their rights.

An 11-year-old Iranian child has died from suicide due to extreme poverty, according to the state-run Asr-e-Iran website on Monday.

Over 123,100 people have died of the coronavirus in Iran, according to reports by the Iranian opposition People’s Mojahedin Organization of Iran (PMOI / MEK Iran).

Mohammad Mousavizadeh from Bushehr was supposed to be attending school, but because of the coronavirus pandemic his lessons were still taking place online and he needed a smartphone to access his education.

The Bushehr Education said that his headteacher gave him a phone and that he was enrolled in the online education system, but his mother says that although this promise was made, it was never fulfilled.

The website wrote: “How do you think this boy’s parents feel now? Sitting in the corner, drowning in grief and mourning, asked themselves why they could not get a smartphone for their child.”

Now, of course, this poor boy could not possibly understand about the economic state of Iran, being wrecked by the regime’s poor decisions. All he knew is that his family were too poor to afford the essentials, which obviously make him feel helpless and depressed, while his parents feel ashamed that they cannot provide for him.

The Tehran police chief recently said that 50% of those arrested for stealing in the past three months have no record. What could have driven them to steal? It’s simple. They do not have enough to live on. They cannot provide for their families. All because the mullahs refused to protect people and the economy by giving out money to the poor and keeping non-essential workers home. The money they could easily afford because there are hundreds of billions tied up in ‘charitable’ foundations linked with the supreme leader and other officials.

How can the regime not see that the solution is not to protect the wealth of rich people, but the lives of society’s most vulnerable? Maybe they do know deep down that that is the purpose of government or maybe they’re so morally bankrupt that they don’t get it. Whatever the case, it is clear that the mullahs will never change.

For decades, they have robbed the Iranian people blind, not caring who they hurt, so long as they can conduct their terrorism, warmongering, and suppression to keep a shaky hold on power. The Iranian people, as we have seen in subsequent uprisings, will not stand for this and they will overthrow the religious dictatorship in favor of a government that champions and protects freedom, democracy, justice, and human rights.

Overcoming #Coronavirus, as is the case with overcoming poverty and high prices in contingent upon overthrowing the clerical regime and establishing people's sovereignty, in which case all of our nation's resources will be utilized for advancing and improving people's lives #Iran pic.twitter.com/JdH2LRvGic

The regime is setting a new record every day as the death toll and the number of COVID19 cases is soaring. But Khamenei shamelessly puts the blame on people. The rising numbers of Covid victims in Iran are not normal and could not be compared to any other country.

Khamenei and Rouhani are protecting their regime from being overthrown by the Iranian people’s protests by adopting the policy of causing mass human casualties.

In response to this desperate situation, people have no other option but to resist a decent and better life. MEK resistance units are mobilizing people to restore their rights.

Navid Afkari Honored by #Iranian Resistance Units and MEK Supporters: #MEK Resistance Unit members risked arrest by graffitiing walls and buildings in more than 40 cities across #Iran in protest of the recent execution of #NavidAfkari. https://t.co/kMZZS9n6Y6

Last year the MEK’s networks inside Iran covered the news of protests, strikes, and gatherings of workers, farmers, teachers, pensioners, nurses, and looted people by credit firms affiliated to IRGC, on daily basis. MEK reported only in one month period there had been 267 protests in different cities, villages, and industrial districts in Iran; that is nine protests a day. MEK resistance units played a key role to form and direct those growing protests.

Navid Afkari Honored by #Iranian Resistance Units and MEK Supporters: #MEK Resistance Unit members risked arrest by graffitiing walls and buildings in more than 40 cities across #Iran in protest of the recent execution of #NavidAfkari. pic.twitter.com/b4M7U4pFcV