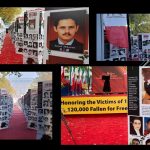 Written by Amineh Qaraee on October 28, 2020. Posted in NEWS 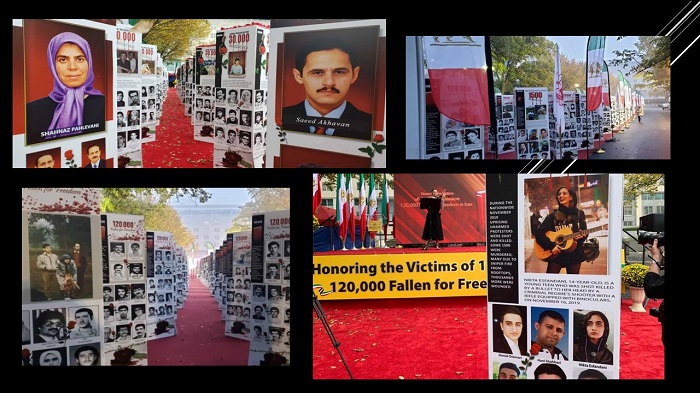 This event was held just prior to the anniversary of the 2019 protests, which demonstrated the impatience for change in Iranian society, especially as protests have continued throughout the year because of the Iranian Resistance’s (PMOI / MEK Iran), efforts to support and encourage these protests.

An Iranian-American group in the United States installed a photo exhibition outside the Department of State on October 21 to commemorate the 120,000 martyrs of the Iranian Resistance, the National Council of Resistance of Iran’s (NCRI), and the People’s Mojahedin Organization of Iran (PMOI / MEK Iran), who died in the fight for freedom, and pay tribute to the 1,500 peaceful protesters gunned down by regime agents in November 2019.

This Organization of Iranian American Communities (OIAC) event was attended by many prominent American figures, including:

Now happening:
Exhibition on #Iran’s crime against Iranian people. Some pictures of those killed by the regime. In front of @StateDept
We invite you to join us@USAdarFarsi @statedeptspox @SecPompeo @USAmbUN @AP @FoxNews @BruceAlanWTOP @GWallaceWTOP pic.twitter.com/s7wxAB3CNG

This event was held just prior to the anniversary of the 2019 protests, which demonstrated the impatience for change in Iranian society, especially as protests have continued throughout the year because of the Iranian Resistance’s (PMOI / MEK Iran), efforts to support and encourage these protests.

In response to ongoing protests, the regime has attempted to scare the people into submission through violent punishments of protesters, such as the execution of wrestler Navid Afkari for taking part in the 2018 uprising, despite the fact that he was the subject of an international appeal to save his life.

However, the Iranian people did not take this lying down. Instead, they attacked the court building where Afkari was sentenced to death, put up images of him all over Iran, and vowed to continue his path in resisting the regime.

Of course, given the escalating crises in Iran, the regime is more than ever on the brink of the overthrow, with even the mullahs’ own media outlets and think tanks admitting to this.

On October 22, the state-run Resalat daily wrote: “Given the current sensitive economic and political situation, the least effect of creating instability in the executive branch of the country amid the severe fluctuations in various markets, increasing inconsistencies in the executive organs, is more pressure on people and more damage to the public.”

Of course, this will soon cause the overthrow of the regime and they know it, something backed up by Hamdeli daily who said that negligence and unprofessional behavior will lead to “disruptions, riots, and crises”.

Now, domestic and international pressure has increased infighting among the mullahs and the “rival faction” – to the limited extent that the regime has different factions – has even called for President Hassan Rouhani to be impeached and executed. It is unlikely this will happen.