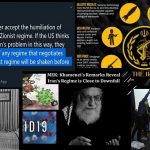 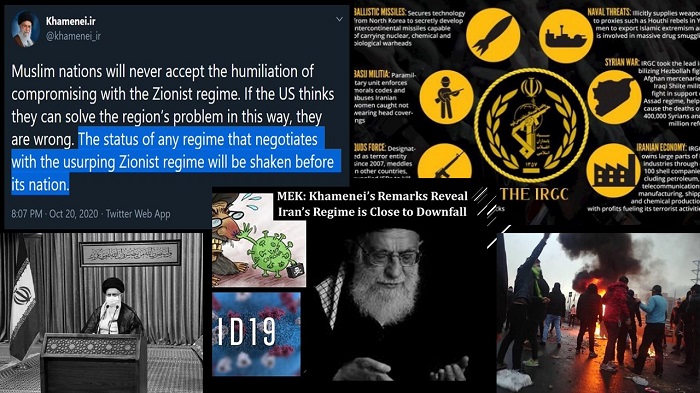 Khamenei has both condoned and celebrated human rights abuses in Iran during his time in power. Freedom of speech, religion, association, and the press have all been curtailed under Khamenei’s rule. the  (NCRI), and the  (PMOI / MEK Iran), has been a specific target of his wrath.

Iranian regime Supreme Leader Ali Khamenei is the religious and political head of Iran, which is governed under the principle of Vilayat-e Faqih, or absolute clerical rule. As such, he has the final word on domestic and foreign policy and bears responsibility for Iran’s human rights violations and belligerence toward the international community. No President or Majlis (Parliament), however moderate they may claim to be, can overrule Khamenei, so Iran will not change based on a newly elected government.

Khamenei was elected regime President in 1981 and then succeeded Ruhollah Khomeini as Supreme Leader in 1989 after Khomeini’s death. In this role, he has approved widespread human rights abuses, foreign meddling and terrorist activities, and a nuclear and ballistic weapons program that endangers global security. He also presided over Iran’s corrupt and incompetent government as poverty levels have soared, inflation has skyrocketed, and the nation’s currency has lost most of its value.

Khamenei has both condoned and celebrated human rights abuses in Iran during his time in power. Freedom of speech, religion, association, and the press have all been curtailed under Khamenei’s rule. the National Council of Resistance of Iran’s (NCRI), and the People’s Mojahedin Organization of Iran (PMOI / MEK Iran), has been a specific target of his wrath.

Khamenei was President during the 1988 Massacre of 30,000 MEK political prisoners. At the time he justified the mass executions, saying, “Have we abolished the death penalty? No! In the Islamic Republic we have the death penalty for those who deserve it,” he said at the time. “If they are connected to the MEK, what should we do? They are sentenced to death and we execute them. We are not joking about this.”

As the highest official of the clerical regime #Khamenei is the main figure responsible for #HumanRights violations in Iran.
This includes execution of 120,000 members of opposition groups mostly #MEK and massacre of 30,000 political prisoners in 1988 https://t.co/kzSe9bPwzw

To date, no one has been held accountable for this crime against humanity, and many of the perpetrators of the 1988 Massacre have gone on to hold high-ranking offices within the regime.

Many thousands of MEK members have been killed by the regime before and after the 1988 Massacre. It is a crime to be a member of the MEK in Iran, and supporters are imprisoned, tortured, and even executed for their beliefs.

Religious and ethnic minorities are actively oppressed as well and are subject to discrimination and arbitrary arrest. They may be denied college entrance or falsely accused of crimes. Women are treated as second-class citizens and denied the right to choose their own clothing or participate fully in public life. They have few legal rights and virtually no protection from abuse.

Those who protest the regime are brutally suppressed by the regime’s Islamic Revolutionary Guards Corps (IRGC). Uprisings were violently suppressed in 1999, 2009, 2017/2018, and 2019. More than 1,500 protesters were killed by regime security forces during the November 2019 Uprisings, and another 12,000 were arrested.

Previous comments made by these so-called religious leaders in the past have led to vicious attacks on young and old women by thugs, who have used acid on the faces of “mal-veiled” women in the street.#MEK #Iran https://t.co/Q9EaS9PFu7 #FreeIran2020 pic.twitter.com/2eajX14B1s

One of Khamenei’s first priorities after he assumed the position of Supreme Leader was to eliminate his opposition. In 1990, he used regime intelligence agents to assassinate Abdul Rahman Ghassemlou, the leader of the Iranian Kurdish group KDPI.

Khamenei then targeted Dr. Kazem Rajavi, the brother of MEK leader Massoud Rajavi. Dr. Rajavi was assassinated because of his support for the MEK, his ties to Massoud Rajavi, and his vocal denunciation of the regime’s human rights violations.

In 2018, Khamenei vowed to get “revenge” on the MEK for its role in the 2017/2018 nationwide uprisings with a terrorist attack. Senior diplomat Assadollah Assadi handed over explosives to two accomplices to deliver to the annual National Council of Resistance of Iran (NCRI) Free Iran gathering in Villepinte, France. His accomplices were arrested en route to the gathering with 500 grams of TATP explosives and a detonator in the trunk of their car.

Assadi was captured the same day in Germany after security footage showed him handing over the explosives. A third accomplice was arrested outside of the gathering for plotting to set off the device. Tens of thousands of MEK supporters, prominent politicians, human rights activists, and dignitaries from around the world were in attendance at the NCRI gathering. If the bomb had gone off, German authorities confirmed that there would have been mass casualties.

Assadi and his accomplices are being prosecuted in Belgium in connection with the foiled terrorist attack. Assadi’s trial is set to begin on November 17. The trial is noteworthy in that it is the first time a sitting diplomat has been prosecuted for direct involvement in terrorism.

Who Will Succeed Ali Khamenei?

The future of the Iranian regime is currently in flux. The Iranian people have signaled with their protests that they are ready for a democratic alternative to the mullahs, and another uprising seems inevitable. This places Khamenei and the current regime in a weakened state.

If the current regime still stands when Khamenei dies, Judiciary Chief Ebrahim Raisi is the current favorite to replace him. Raisi is known for his role as a Death Commissioner during the 1988 Massacre. He still defends the massacre as necessary and said in an interview last year that the MEK must be “eliminated.” If the regime survives, the next Supreme Leader may well be more murderous than the current one.