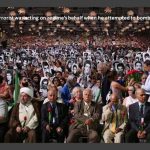 The regime had long claimed that the MEK was a fringe group with little support or influence inside Iran, but now it was forced to acknowledge its role in the protests.

Preliminary hearings began in Antwerp, Belgium on July 15, 2020, in the terrorism case against Iranian regime diplomat Assadollah Assadi and his three alleged accomplices. Assadi stands accused of masterminding the foiled terrorist attack on the National Council of Resistance of Iran’s (NCRI), and the People’s Mojahedin Organization of Iran (PMOI / MEK Iran), Free Iran gathering in June 2018 in Villepinte, France. The event was attended by tens of thousands of MEK supporters, NCRI President-elect Maryam Rajavi, and hundreds of high-ranking political dignitaries from around the world.

Anticipation is running high for the trial, which is set to begin on November 27. Assadi is the first sitting diplomat to be arrested and charged with a terrorist act. Prosecutors in the case plan to present evidence that the plot was ordered by those at the highest levels of the Iranian regime. If all of this weren’t staggering enough, Reuters reported on October 9 that Assadi warned Belgian police in March that “armed groups in Iraq, Lebanon, Yemen, and Syria, as well as in Iran, we’re interested in the outcome of his case and would be ‘watching from the sidelines to see if Belgium would support them or not’” according to minutes taken from a police interrogation. Belgian authorities construed this as a threat.

Why Take the Risk?

In hindsight, the foiled bombing of the 2018 Free Iran gathering was a foolish gamble by the Iranian regime. The mullahs have a long history of terrorist attacks and assassinations, and they have frequently targeted the MEK, but this case was exceptional. First, they directly involved a diplomat in a way that could not be denied. There is evidence of Assadi boarding a plane with 500 grams of TATP explosives and video footage of him handing over the explosives to the two accomplices who were apprehended with the bomb in their possession.

Second, the regime planned to attack tens of thousands of people on European soil. Among those present were current and former congressmen, MPs, high-ranking cabinet members and ministry officials, and human rights activists. If the bomb had been detonated, there would have been an international outcry and the regime would have certainly been found responsible. No reasonable person would allow this plan to go forward.

This leaves one explanation: the plot was not a rational act. The attack was an act of desperation and revenge.

Anti-government demonstration in #Mashhad expected to spread over other cities as more people joining the ongoing protests. pic.twitter.com/gyfesMnCAu

The MEK and the Iranian Resistance

The December 2017/January 2018 Uprisings shook the regime to its foundation. Iranians in every province poured into the streets for almost two weeks demanding an end to the regime. This was unprecedented in the four decades of the mullahs’ dictatorship. It took a massive show of military strength and thousands of arrests to suppress the initial uprising, but nothing would be the same after that.

The regime had long claimed that the MEK was a fringe group with little support or influence inside Iran, but now it was forced to acknowledge its role in the protests. MEK Resistance Units sprang up in every city and town in the country and helped organize the people in resisting the regime. Maryam Rajavi pronounced 2018 The Year of Uprisings, and protests, strikes, and demonstrations took place across the country on a daily basis.

Supreme Leader Ali Khamenei could see his grip on power slipping away and began to talk about seeking “revenge” on the MEK. Ali Shamkhani, Secretary of the Supreme National Security Council, threatened that “the Mujahideen (MEK) will be knocked back from where they cannot imagine.” A tweet by then-Deputy Intelligence Minister Hesamaldin Ashena posted in early 2018 hinted that the terrorist plot was already being planned. The tweet described Maryam Rajavi as a target.

Foreign Minister Javad Zarif was brought in to help coordinate the plot as well, and President Hassan Rouhani and Zarif scheduled a trip to Vienna and Switzerland to coincide with the bombing. This would have placed them in a key position to negotiate with foreign intermediaries should the plot have been successful.

The Iranian regime’s extensive two-year efforts to help its arrested diplomat in Belgium have so far proven futile, and the first public trial for Assadi will soon be convened. #Iran #ExpelIranDiplomatTerrorists pic.twitter.com/Us5O1adofF

The bungled plot to murder thousands of MEK supporters and world leaders in 2018 was an attempt to eliminate Iran’s democratic alternative to the theocratic regime. The mullahs hoped that if the MEK was destroyed, the Resistance would die out.

This strategy failed in 1981 when regime founder Ruhollah Khomeini shot hundreds of peaceful protesters in the streets of Iran, it failed when he ordered the executions of 30,000 MEK political prisoners in a single summer, it failed when security forces killed 1,500 protesters in the streets of Iran in the November 2019 Uprisings. The 2018 terrorist plot was brazen and poorly-planned, but it was not out of character for the regime. As the mullahs’ desperation grows, their instability grows as well. The world will not be safe until Iran is free.