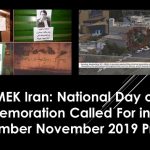 Written by Mohsen Aboutalebi on October 11, 2020. Posted in NEWS 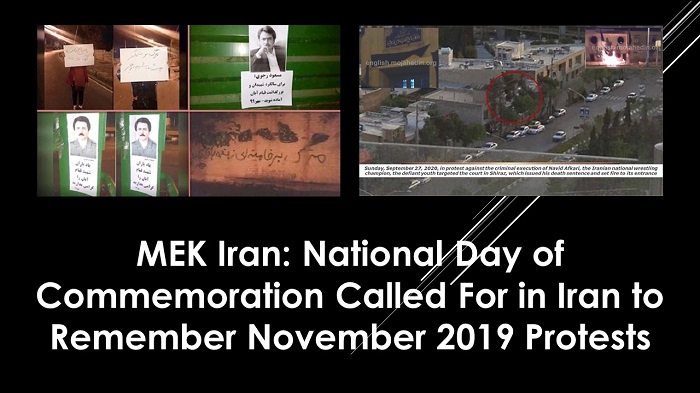 National Day of Commemoration called for November 2019 Protests: The MEK’s Resistance Units were the leading force behind the protests.

The internal network of the People’s Mojahedin Organization of Iran (PMOI / MEK Iran), also known as the Resistance Units, has called for a national day of commemoration on November 15th, now only a month away, to remember the day the protests began that took place across Iran last year and those who were killed and arrested during the protests.

It was on that date last year that the regime tripled the price of gasoline, precipitating the riots and protests that shook Iran to the core. The regime’s forces were responsible for killing 1,500 protesters over the next 2 days of protests. The MEK’s Resistance Units were the leading force behind the protests.

The Resistance Units have not let up their actions. Iran today is a powder keg ready to explode. It’s not a question of “if” but “when.” Recently, resistance supporters have been busy displaying signs showing their support for the National Council of Resistance of Iran (NCRI) President-elect, Mrs. Maryam Rajavi, and Iranian Resistance leader, Massoud Rajavi with posters, banners, and images.

The MEK Resistance Units have also been displaying slogans in many Iranian cities, including:

In Tehran, Kerman, Mashhad, Kazeroun, and Rasht, young rebels targeted the hated agents of oppression, the Basij forces. In Mashhad, the Basij base was set on fire. The Basij are the ones who are most involved in targeting protesters and were implicated in the murders of protesters last November.

The centers of fundamentalism in Kerman, Kazeroun, and Tehran have also been set on fire. They are bases for outdated ideas promulgated by the mullahs, basically intended to suppress Iranians.

Courts responsible for issuing death sentences have also been targeted by rebellious youth. In Khorramabad, the General Prisons Administration of Lorestan was targeted.

Supporters of the (PMOI / MEK Iran) and MEK Resistance Unit show extreme courage when they take part in these sorts of activities. The regime has become fearful of more protests erupting and consequently has put more forces on the streets to counter any activities seen as opposing the mullahs.

#NCRI said in a statement: “In protest against the criminal execution of #NavidAfkari, the #Iranian national wrestling champion, the defiant youth targeted the court in Shiraz, which issued his death sentence and set fire to its entrance.”https://t.co/ietVueZ81R #MEK #Iran