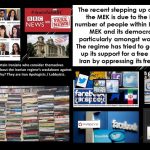 Written by Amineh Qaraee on October 9, 2020. Posted in NEWS 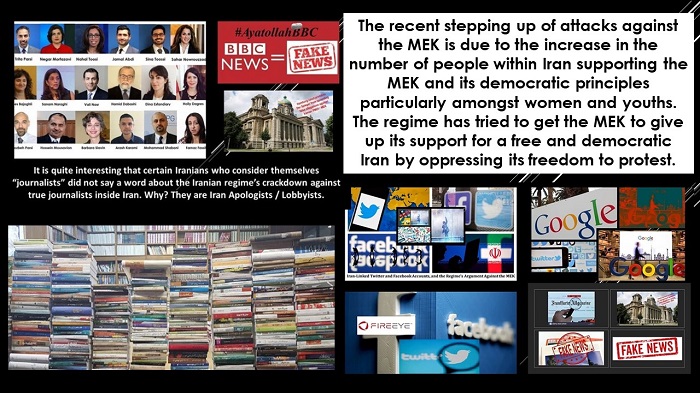 Throughout the decades of rule by the theocratic regime, it hasn’t stopped demonizing what the MEK stands for and that is freedom and democracy in Iran and not oppression and terrorism so often used by the regime to terrorize its citizens.

The Iranian regime continues to pursue its demonization campaign against the main Iranian opposition organization, the National Council of Resistance of Iran (NCRI), and the People’s Mojahedin Organization of Iran (PMOI / MEK), by releasing books that do not speak the truth. The regime has some of the most repressive institutions doing its dirty work for it, which include the notorious Ministry of Intelligence and Security (MOIS) and the Revolutionary Guards (IRGC). Iran’s libraries are full up with these publications.

Throughout the decades of rule by the theocratic regime, it hasn’t stopped demonizing what the MEK stands for and that is freedom and democracy in Iran and not oppression and terrorism so often used by the regime to terrorize its citizens.

There is one book in particular that needs a mention and that is “The Possessed.” In its 204 pages, Mina Shaulizadeh, who is the author sources information from the IRGC. However, she does say the work is fiction until she happens to mention that the request from the regime’s Supreme Leader, Ali Khamenei, was “don’t allow the place of martyrs to be replaced with the executioner.”

“The Portentous,” which at 162 pages long was published by Habilian, a branch of the MOIS justified the 1988 massacre of 30,000 Iranian political prisoners by stating that “thirty percent of the MEK [martyrs] during the operation ‘Eternal light’ [MEK’s major offense] were former political prisoners who were in prisons between 1981 and 1987.”

There are many organizations and foundations in Iran which despite ever-increasing poverty in the country find the money to publish books that concentrate on peddling disinformation about the (PMOI / MEK Iran). One of these is the Islamic Revolution Document Center which published “Iran’s History after the Islamic Revolution.”

Some of the other organizations are the following:

Between the Iranian revolution and today, more than 461 volumes have been released, which amounts to around 12 volumes each year. From 2016, this number shot up to 77 volumes, with 19 books being published per year. It has been just about impossible to read any books published by the (PMOI / MEK Iran), as since 1981 it was a crime punishable by death.

The recent stepping up of attacks against the MEK is due to the increase in the number of people within Iran supporting the MEK and its democratic principles particularly amongst women and youths. The regime has tried to get the MEK to give up its support for a free and democratic Iran by oppressing its freedom to protest. Fortunately, this was not successful and the influence of the resistance movement has not stopped growing and by demonizing the MEK, the regime attempts to justify the oppressive measures it uses within Iran and its terrorist activities waged against the MEK and the Iranian Resistance overseas.

As the popularity of the #MEK grows more articles are published against the MEK but much of it is old news that has already been challenged. However, other sources were used to discredit the MEK in the form of 14 complete books which were published in just 12 months. #Iran pic.twitter.com/B62apEOdOa