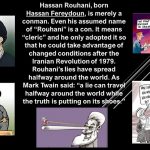 MEK Iran: Hassan Rouhani’s Speech to the U.N. Shows He is in Cloud Cuckoo Land 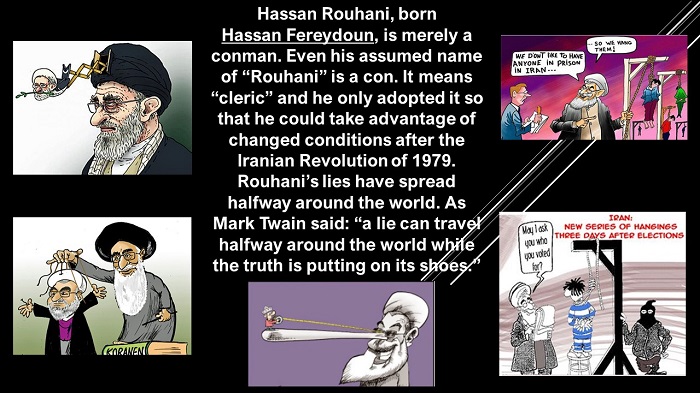 The same mentality has continued with the regime in Iran accusing the Iranian opposition, the  (PMOI / MEK Iran), of precisely the characteristics and behavior it exemplifies itself: misogyny, hostage-taking, cultism, terrorism, imprisonment, torture, sexual exploitation, and religious hypocrisy.

Iranian President Hassan Rouhani’s speech to the U.N. General Assembly on September 22nd shows that he is either in cloud cuckoo land, or a cynical liar, or both.

Rouhani, of course, was appointed by Ali Khamenei, and the claims and speeches that he makes in fact only reflect what his mullah overlords are telling him to say. So, if Rouhani’s comments to the U.N. about the Iranian regime being an “axis of peace and stability” are ridiculous lies, it is only because they are the same lies that reflect the reality of the upper echelons of the regime itself.

#Iran: Rouhani’s blatant lies at the #UNGA #Iranian regime president Hassan Rouhani put on another display of pathological lies during his speech at the United Nations General Assembly on Tuesday.#NoImpunity4Mullahs https://t.co/5bp00aIgQK

When the mullahs criticize their opponents it is almost as if they are reading from a list of what makes them so reprehensible themselves. The previous Supreme Leader, and Rouhani’s mentor, Ruhollah Khomeini, was a master at projecting onto his opponents his own vile traits. He even half-jokingly suggested that when his opponents were tortured they had done it to themselves to make the regime look bad. The same mentality has continued with the regime in Iran accusing the Iranian opposition, the People’s Mojahedin Organization of Iran (PMOI / MEK Iran), of precisely the characteristics and behavior it exemplifies itself: misogyny, hostage-taking, cultism, terrorism, imprisonment, torture, sexual exploitation, and religious hypocrisy.

Iranian regime president Hassan Rouhani put on another display of pathological lies during his speech at the United Nations General Assembly on Tuesday.#Iranhttps://t.co/3G7VxU8k2p

The way Iran’s theocratic state operates is a striking similarity to George Orwell’s totalitarian fictional novel, 1984. In Iran, “Big Brother” is constantly watching. The Ministry of Peace is a term used for the Ministry of war and terrorism. The “thought police” are concerned with the actions of ordinary Iranians and whether they act according to the dystopian version of Islam which the regime professes to follow.

Rouhani’s words to the U.N. are in jarring contrast to the real Iran, where a totalitarian regime oversees its citizens’ everyday behavior, shuts down the Internet when the truth leaks out, slaughters innocent protesters whenever they take to the streets, implements its own repressive dress code on women.

Iranian regime president Hassan Rouhani put on another display of pathological lies during his #UNGA speech.
-"Political freedom at home is very important to us"
-"we are proud of our democracy"
and more…#Hypocrisyhttps://t.co/ovaAs1VbIw

At the U.N., Rouhani blithely stated that “our nations and children deserve a better and safer world based on the rule of law.” And yet, the regime still executes children and young people. Only the other day, 27-year-old wrestling champion and pro-democracy advocate, Navid Afkari was executed despite international pressure on the regime to do what Rouhani suggested other nations should do.

Other comments made by Rouhani at the U.N. are as far from reality as could be thought possible. The Iranian regime, according to Rouhani, is a “champion of the fight against occupation and extremism,” an “axis of peace and stability,” and the “harbinger of dialogue and tolerance.”

It’s hard to know where to start with this alternate reality. Is the regime a “harbinger of dialogue and tolerance” when it persecutes religious minorities or slaughters 30,000 members of the MEK because they don’t agree with the regime? Is the regime an “axis of peace and stability” when it guns down 1,500 of its own people just because they are protesting about a sudden rise in gasoline prices?

Is Rouhani suggesting that his regime is a “champion of the fight against occupation and extremism” when it sponsors Hamas in Gaza, the Houthis in Yemen, Hezbollah in Lebanon, and mass murder in Syria, overseen by the regime’s terrorist in chief, Qassem Soleimani, also referred to by Rouhani as “our assassinated hero?”

In his speech at the United Nations General Assembly, President Rouhani talked about the importance and necessity of giving our children “a better and safer world based on the rule of law”. https://t.co/tTbHOX0F2a

Rouhani claims that his regime is a model of “moderate and rational Islam, not extremism.” One of Rouhani’s predecessors, Rafsanjani, said about this so-called moderate Islam: “Divine law defines four sentences for [dissidents] which must be carried out:

3. Cut off their arms and legs,

This is apparently the “moderate Islam” that has defined this regime, led to the murder of thousands of its own citizens, suppressed women, and outdone ISIS in Syria for overall ruthlessness.

Hassan Rouhani, born Hassan Fereydoun, is merely a conman. Even his assumed name of “Rouhani” is a con. It means “cleric” and he only adopted it so that he could take advantage of changed conditions after the Iranian Revolution of 1979. Rouhani’s lies have spread halfway around the world. As Mark Twain said: “a lie can travel halfway around the world while the truth is putting on its shoes.” Rouhani’s lies are the regime’s lies and they a direct result of the precarious position the regime finds itself in as protests grown and disdain for the mullahs’ cabal becomes ever more obvious. No lies can hide the fact that the Iranian regime, Rouhani with it, is headed for the dustbin of history.