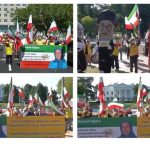 Written by Mohsen Aboutalebi on September 25, 2020. Posted in NEWS 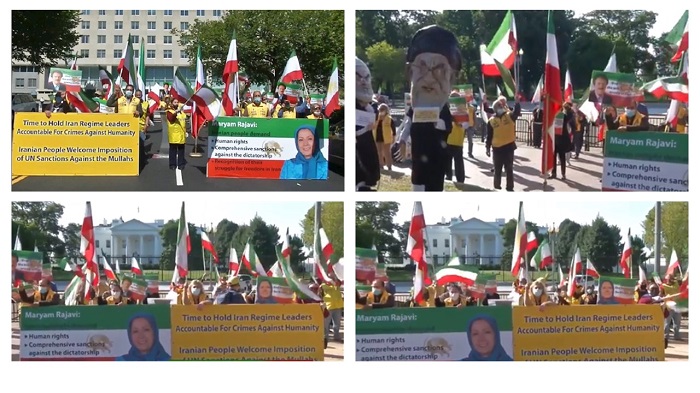 Supporters of the People’s Mojahedin Organization of Iran (PMOI / MEK Iran), held rallies in Washington D.C. and in major cities across Europe to coincide with the U.N. General Assembly speeches being heard. The rallies reiterated their support for sanctions against the Iranian regime and called on the international community to take action against the brutal human rights record in Iran.

Sent by Iranians in #Geneva simultaneously with the trans-Atlantic live summit to internationally call for firm sanctions on the mullahs regime and end to executions.#SundayThoughts pic.twitter.com/Mrfqv4uVOE

Action should now be taken by the U.N. and all responsible governments against a regime that in 1988 organized the slaughter of 30,000 political prisoners, most of them members or supporters of the (PMOI / MEK Iran). The repression continues today with the execution of protesters like a champion wrestler, Navid Afkari, as well as over 1,500 demonstrators in November last year.

Rally participants were keen to point out that the mullahs’ regime only knows firmness. Appeasement by governments towards the regime simply means that they think they have the opportunity to continue their policy of repression at home and terrorism overseas.

WATCH | Alireza Jafarzadeh (@A_Jafarzadeh), the NCRI-US Deputy Dir, speaks at the rally held by the DC-area Iranians "to support the restoration of all #UNSC sanctions & call for recognition of the Iranian ppl's struggle for a #FreeIran," on Sept 22, 2020.https://t.co/XQZTLv0zI5

Banners were upheld at the rallies, expressing support for the National Council of Resistance of Iran (NCRI), leader, Mrs. Maram Rajavi, and her 10 point plan for Iran’s future. Other slogans used at the rallies included:

Apart from Washington D.C., where the rally took place outside the White House, there were rallies in Cologne, Stuttgart, Stockholm, Gutenberg, Malmo, and Rome.

A statement of support was declared across the wider world community calling on governments to support the opposition movement’s desire to form a free and democratic Iran.

The statement read: “During the uprisings of 2017, as well as in November 2019 and January 2020, the Iranian people expressed their desire to overthrow the regime with the slogans ‘Death to Khamenei, Rouhani,’ ‘Reformist, principalist, the game is over,’ and ‘Death to the oppressor, be it the Shah or the leader.”

We have not come to gain something for ourselves; we have come to sacrifice and pay the requisite price. We are determined to restore freedom and people’s sovereignty in #Iran, and this will happen #FreeIran2020 pic.twitter.com/UbqFvw1hw6

The statement added that Iranians needed a minimum standard of living, more jobs, and better access to housing. Instead, they were forced to endure a despotic medieval regime that existed on to plunder what wealth the people created. The statement went on to call for the IRGC to be disbanded, but before that to make it give back the billions it had hoarded of the people’s wealth.

PM @ediramaal at a press conf with @jensstoltenberg of the @NATO referred 2the recent expulsion of 2of the #Iranian regime’s“diplomats,de-facto terrorists,for“activity incompatible with their diplomatic status” – a phrase that has previously been used in cases of spying.#FreeIran pic.twitter.com/NmdKpVXcbe

“The Iranian regime’s embassies and diplomatic missions in Europe should be closed down as they are simply centers used to further the terroristic aims of the mullahs,” said the signatories.

They added that all the regime’s embassies in Europe which are “centers of terrorist acts” should be closed and the mullahs’ agents should be expelled.