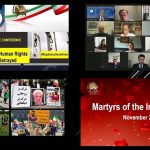 Written by Mohsen Aboutalebi on September 18, 2020. Posted in NEWS 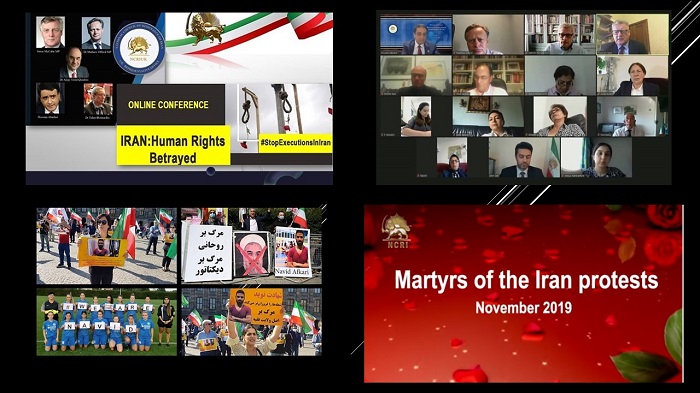 The MEK’s new revelation once again shows the large scale of these protests and the regime’s brutality.

The National Council of Resistance of Iran (NCRI) representative office in the UK recently held an online conference to highlight the human rights abuses going on in Iran. This was held after the execution of Navid Afkari, a well known Iranian champion wrestler. It is not just Navid who was of concern to the NCRI, but also Mostafa Salehi, who was arrested and detained by the regime in August.

Navid Afkari’s execution shows how the regime has no respect for human rights. The international community must act as soon as possible by sending a fact-finding mission to assess the conditions in Iranian prisons and secure all those political prisoners who were arrested in 2018 and 2019.

The People’s Mojahedin Organization of Iran (PMOI / MEK Iran)’s new revelation once again shows the large scale of these protests and the regime’s brutality.

The People’s Mojahedin Organization of #Iran (PMOI/#MEK) released the names of 56 more martyrs of the nationwide Iran protests of November 2019, bringing the number of identified martyrs to 811 out of over 1500 who lost their lives. #NoImpunity4Mullahs
https://t.co/uBuzgdscm1

Dr. Matthew Offord, who is a member of the UK House of Commons, condemned Navid Afkari’s execution and appealed to the international community to “re-impose sanctions on the mullahs’ regime.”

He also considered the UK government’s plan to approve the 2015 Iran nuclear deal, often referred to as the Joint Comprehensive Plan of Action (JCPOA) as a bad move. This accord simply freed up resources that permitted the regime to provide cash to terrorist groups. He issued a reminder to participants that the regime is inflicting punishments on protestors which breaches human rights. He also said the arms embargo should be reinstated as arms are being used against the Iranian people.

In his final words he said, “If Iran wants to have any kind of engagement with the West or other countries in the Middle East, it must stop executions and crackdown on its people, and stop its terrorist activities.”

.@Offord4Hendon: Iran regime’s resorting to torture & execution is a clear sign of its desperation. It is a great regret that #NavidAfkari has been executed. I would like to see the UK to reimpose sanctions on Iran. #StopExecutionsInIranhttps://t.co/WEZ3l6d3dv

In his own words, MP Steve McCabe said what happened to Afkari symbolizes what is taking place in the rest of the country. He said other political prisoners should be concerned at this time about their own fate.  He said reactions to Afkari’s execution show that the Iranian people no longer tolerate their rights being abused.

He further argued for the reinforcing of the arms embargo so that Iran does not get its hands on arms, it is likely to misuse. He said the time had come for the UN to conduct an in-depth investigation into the 1988 massacre. Before the Iranian regime gets out of control it is time for the UN to take action and this means ejecting Iranian diplomats who are positioned overseas.

Dr. Alejo Vidal Quadras, former Vice President of the European Parliament, “These executions in Iran are not a matter of general death penalty. It’s not enough to condemn the death penalty in general. These executions are of a political character. They are killing political prisoners, political opponents. This is a clerical regime that executes people to stay in power.

The execution of Navid Afkari was not condemned by the European Union as a deliberate political execution. It was condemned as a death penalty in general. This is weak and allows the regime to continue such executions. European leaders must understand that silence and inaction is—and this is hard to say—complicity with these executions. The regime does not respond to weak condemnations.

It’s time to call for an international investigation into this crime. This issue must be referred to the UN General Assembly and an independent investigation must be launched.

Dr. Alejo Vidal like other participants by saying European governments should close Iranian embassies in the 27 capitals.

.@VidalQuadras: The international community must take urgent action to stop the execution of political prisoners in Iran. This is a clerical regime that executes people to stay in power. #StopExecutionsInIran #NoImpunity4Mullahshttps://t.co/gIayoTeUeb

Former Chief of the Human Rights Office of the UN Assistance Mission for Iraq (UNAMI) and legal expert, Tahar Boumedra, stressed the need for immediate action against the Iranian regime:

We know with documents that a number of political prisoners are currently on death row and in danger of being executed. If no serious measure is taken, there will be a massive loss of life. It is the responsibility of the international community to say no, it must stop. It is time for the UN to take action.

Action must be taken immediately to save lives. The UN must not be expected to take action. It’s up to the governments, especially the EU and UK, to take action, to stop closing their rights on human rights for commercial gain. The UN must stop recommending action. The matter has to be referred to the UN Security Council to take firm action.”

.@BoumedraTahar We have a track record of the behavior of the judicial officials in #Iran where through kangaroo trials they executed political prisoners in 1988. Men, women, and even children were subjected to this torture.#Iran #MEK#StopExecutionsInIran #FreeIran2020 pic.twitter.com/ddBKlsnWnc