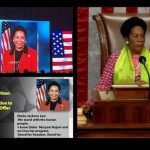 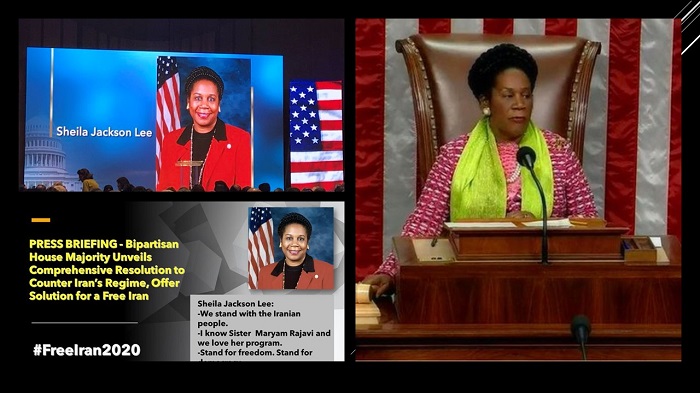 This conference today is to ensure that Iran does the right thing and stops again the attacks against the members of the Iranian opposition (PMOI / MEK Iran), in Albania.

Transcript of remarks Rep. Sheila Jackson Lee at worldwide internet conference focusing on the mullahs’ support for terrorism and shutting down its embassies- July 20, 2020.Greetings. It’s a pleasure to be able to greet my dear sister, Madame Rajavi, and to greet all of you who are gathered in this most momentous occasion. You will see that I am wearing a face mask because I could not be honest with the world if I did not acknowledge my friends and neighbors in Houston and Texas who are facing their own mountain of struggle with COVID-19.

Iran is facing the same struggle. And it is important to have good government. When you have a good government, when you have democracy, you can take care of those who are in need. The numbers in Texas are 338,000 cases and we have had thousands of people who have died family and friends, and so my commitment to Houston and Texas is to stand in the gap and fight to make sure that good government does the right thing so that I can save more lives.

This conference today is to ensure that Iran does the right thing and stops again the attacks against the members of the Iranian opposition The People’s Mojahedin Organization of Iran (PMOI / MEK Iran), in Albania. It is important to condemn human rights violations in Iran, to recognize that each person is deserving of human decency, and as well as I have read and viewed this dynamic 10-point plan of my sister Maryam Rajavi in supporting a secular, democratic, non-nuclear republic of Iran, I encourage those who love democracy to never yield, to stand in courage and continue to fight no matter how long that fight may take.

”Congratulations on your #2018IranFreedomConvention for Human Rights and Democracy! The @OrgAIC has been stalwart in advocating for world peace and security, ”says Rep. Sheila Jackson Lee (D-TX).#Iran pic.twitter.com/asHchFXc2x

I’m supporting the Albanian officials for expelling the Iranian ambassador from Albania. I’ve been to Albania during the Albanian War. I know the good people of that great land. I know that they long for democracy as well and the protection of all groups. Urging Albania again to close the Iranian regime embassy for the ongoing terror plots against Iranian opposition and members of the MEK. We must stand united. We must applaud and recognize that the Albanian government is good in its desire and the work that it has done by hosting MEK members in Albania. That is a courageous and important step as part of the world family, the human family.

You know, I want to thank former Senator John Kerry. I remember going to Albania during the Albanian War where there was a need to protect those who were of the minority. And I think former Secretary of State John Kerry was the architect of the relocation of the MEK members from Iraq to Albania. And I remember being in the midst with so many members of Congress who were fighting to save you and as well to close down those terrible camps that would not allow you to see your loved ones or get medical care. How inhumane.

We’re looking for a time, Madame, when the leadership of Iran will be one of democracy, one that is secular, one that is loving, one that respects the decency of all people. And I’m very glad to be part of 222 members of Congress, a majority of the House of Representatives, that supports the Iranian opposition The National Council of Resistance of Iran (NCRI), and Madame Rajavi for a free Iran.

As you well know, we are in a fight to defeat COVID-19 as the world is. And we will win that battle by doing the right thing by having stay-at-home orders, by continuing to test, by listening to science and medicine. I hope that Iran will do the same and not hide its numbers and not let people know what is transpiring there. And the reason why I can say that is because I know that it saves lives.

So sad to hear about the death of Rep. John Lewis, a great defender of the Iranian people against tyranny. In an address to the annual gathering of 100,000 Iranians in Paris in 2017, he said, “We need more than ever before, a Free Iran.” RIP #FreeIran2020https://t.co/AEWr1iDIQM

And a dear person, a solider on the battlefield for democracy and human rights is our great civil rights icon and friend, the late John Lewis. I must say to the world that America’s lost one of the greatest Americans, a person who loved peace, one person who stood alongside Dr. Martin Luther King, who taught us about the beloved community. Hew as my friend, my brother. We loved each other because I love freedom, I love democracy, and he was the father of it in 20th century America, 21st century America, he was the conscience of the Congress. He led us to believe in the equality of all people. He stood in the gap. He was arrested. He went to jail. He was brutalized and beaten, he bled for justice. Yes, his fight was to ensure that those who were the descendants of enslaved Africans could be free, but he did not limit himself to those, all people were in the realm of John Lewis’s fight for justice and freedom. And I am so glad to have been able to call him a friend. If all of our nations could walk in his footsteps of freedom and peace and justice, what a great world this would be.