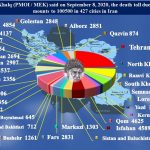 Written by Mohsen Aboutalebi on September 9, 2020. Posted in NEWS 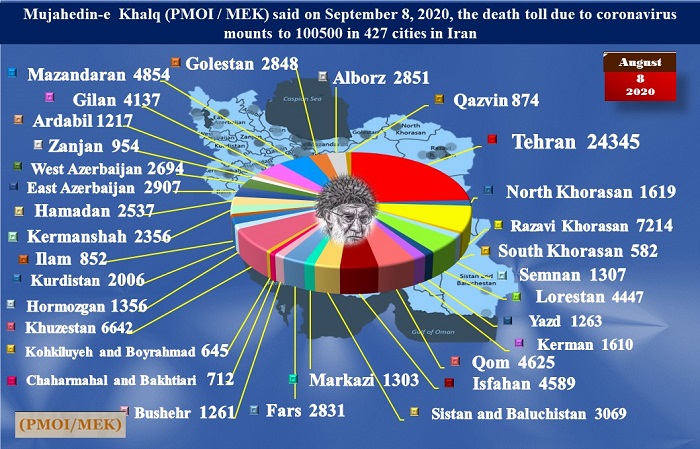 Up to now, the statistics are coming from records released from morgues and hospitals around the country and testimonies from eyewitnesses which the MEK and NCRI are interpreting and releasing to the public.

There seems no end in sight for COVID-19 cases in Iran as the Health Ministry has just reported another 117 deaths and many more infections. The People’s Mojahedin Organization of Iran (PMOI / MEK Iran) announced on, September 8, 2020, that the COVID-19 death toll across Iran had passed 100,500.

Despite the figures being the worst in the Middle East there has been no effort to reduce the spread. Even worse, the regime seems determined to cover up the enormity of this calamitous situation by underreporting the statistics by as much as five times. It figures emerging from the communities and hospitals that represent the true case numbers.

More than 100,000 people have died of the novel #coronavirus in 427 cities checkered across all of Iran's 31 provinces, according to the Iranian opposition PMOI/MEK.

Mrs. Maryam Rajavi, the president of the National Council of Resistance of Iran (NCRI), said that Ali Khamenei, despite holding billions of dollars of Iranians cash, has barely spent a cent on helping to combat COVID-19. The NCRI has over a long period revealed the hordes of money Khamenei and the revolutionary guard hold, but this has never been used to support ordinary Iranians.

President Hassan Rouhani, well into the pandemic, asked for a billion dollars to be released “from the country’s sovereign wealth fund.” A few weeks later the Health Ministry reported that it had only received about 350 million dollars, in total less than $4 per person.

With the strong links between China and Iran, the country picked up Covid-19 earlier than many other countries but did not act to stem the spread, despite China reacting quickly by locking down Wuhan. Mahan, Iran’s national airline, even continued with flights in and out of China after the borders had been closed. It wasn’t until well into February when the first deaths were reported. These coincided with the usual national celebrations commemorating the Iranian revolution but were not revealed until after the day because the regime did not want people to avoid the event due to fear of contracting the deadly virus.

It has also been suggested by a previous Health Ministry’s Coronavirus Combat Task Force member that the first COVID-19 cases in Iran could have been back in December 2019 but were covered up due to the protests that were going on at the time. Iranian resistance leader, Mrs. Rajavi, believes the outcome from COVID-19 “was entirely preventable.” Once the regime decided to tell the people about the seriousness of the outbreak on February 21st, Mrs. Rajavi instantly asked the World Health Organization “to send supervisory and medical teams to the Islamic Republic to get ahead of the outbreak.” This didn’t happen.

There is no good reason why the regime couldn’t at least announce the true figures from the pandemic and not continue to cover the figures up. Up to now, the statistics are coming from records released from morgues and hospitals around the country and testimonies from eyewitnesses which the MEK and NCRI are interpreting and releasing to the public.

“The scale of the death toll is the immediate result of the criminal and inhuman policies pursued by Khamenei and Rouhani,” said Mrs. Maryam Rajavi.

Even though the pandemic has been present for several months there is still an urgent need for international intervention as the regime is still withholding life-saving aid.