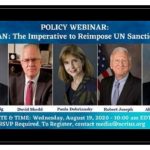 Written by Mohsen Aboutalebi on August 28, 2020. Posted in NEWS 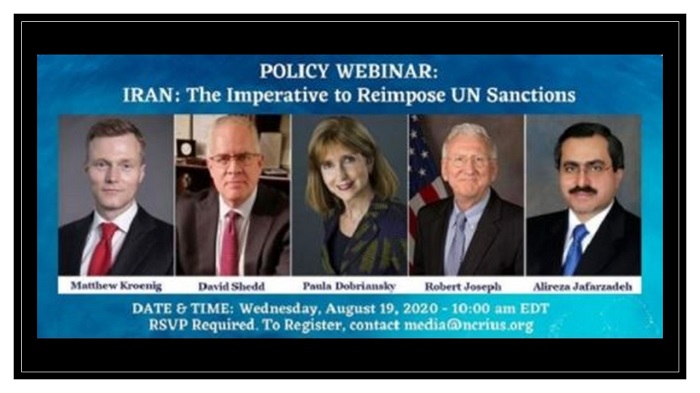 MEK Iran: Terrorism is a cornerstone of the Iranian regime, for its survival. They are actively engaged in terrorism in different western countries.

The US Representative Office of the National Council of Resistance of Iran (NCRI) held a virtual conference on Wednesday to discuss the regime’s terrorism, the need to reimpose all sanctions on Iran, and to keep in place the United Nations arms embargo that expires in October.

At the event, attended by several American politicians and experts, the NCRI presented its new report: “Iran, The Imperative to Reimpose Sanctions”, which notes that the regimes used domestic suppression, the export of terrorism, and warmongering to stay in power.

UN arms embargo on the #Iranian regime which comes in mid-October, based on the UN Security Council resolution 2231. We will discuss the implications of such lifting, and what are the options to prevent that.#NCRI #MEK #Iranhttps://t.co/zD2Jgd4P3c via @stopfundamentalism pic.twitter.com/zVBPvWGX8e

NCRI- US Deputy Director Alireza Jafarzadeh said:  “Terrorism is a cornerstone of the Iranian regime, for its survival. They are actively engaged in terrorism in different western countries. At a time when the Iranian regime needs Europe the most, they have stepped up their terror operations in Europe.”

Ambassador Joseph Detrani, the former Special Envoy for Six-Party Talks with North Korea, said that outside observers must have “significant empathy” for the Iranian people, who have continued to suffer even though the country got $50 billion after the 2015 nuclear deal was signed because the regime spent that money on terrorism and warmongering.

Ambassador Detrani said: “The people of Iran are the key issue here. The theocracy does not care for the people. That is where the focus needs to be. The international community must come together and say enough! Focus on good governance, responsible leadership, and care for your own people.”

While Mike Pregent, a senior fellow at the Hudson Institute and an expert on Middle East affairs, explained that the US must hold its allies and enemies to account for support of the regime.

Ambassador Marc Ginsberg, the former US envoy to Morocco, said: “What we tend to forget is how many tens of thousands of innocent Iranians have been murdered by this regime to maintain its hold on power… Since the nuclear deal was signed, we saw case after case of terrorist attempts against Iranian opposition, The People’s Mojahedin Organization of Iran (PMOI / MEK Iran) and (NCRI) leader, Mrs. Maryam Rajavi the President-elect of the National Council of Resistance of Iran’s (NCRI).

WATCH as Amb. Marc Ginsberg responds to a question as why the Europeans continue to appease the regime in Iran despite all its malign conduct at home and abroad.#IranSanctions #UNSC @A_Jafarzadeh @iran_policy @ambmcg https://t.co/I0DkhcgHo4

Regime agents were arrested on their way to bomb a gathering of the Iranian resistance in France. We cannot bet on the nuclear deal as an end-all to Iran’s bad behavior. We need a new alliance between the U.S. and Europe to support what the people need. We must support the Iranian opposition, the NCRI, and Madam Maryam Rajavi. We have to protect Iran’s adversaries, those who are being targeted in the region. Are we going to tell them a new deal will stop that? That is naive.”

Reporting by PMOI/MEKIran, August 19, 2020—It is imperative for global peace and security to reimpose all United…