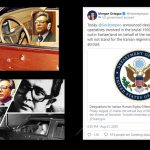 MEK Iran: The Iranian Regime’s Terrorism is Being Exposed Little by Little 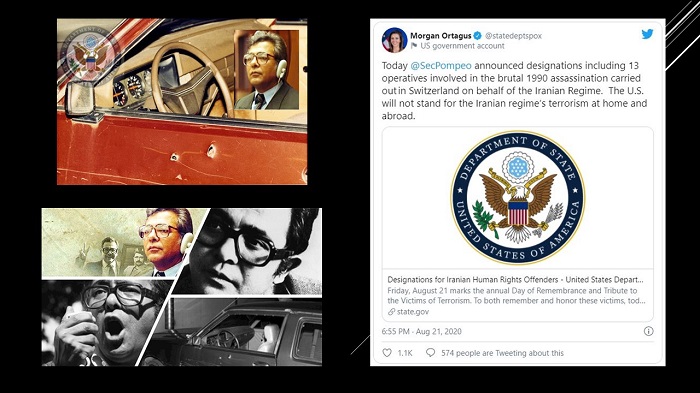 The (PMOI / MEK Iran) and the NCRI, have continued to publicize the terrorist activities of the Iranian regime.

The policy of appeasement by some western administrations has encouraged the Iranian regime to continue its policy of assassinating activists and members of the Iranian opposition, The People’s Mojahedin Organization of Iran (PMOI / MEK Iran) and The National Council of Resistance of Iran (NCRI), arresting and executing many ordinary Iranians who dare to take the streets to express their frustration with the regime, as well as sponsor terrorism well beyond Iran’s borders.

There have been welcome steps taken by some western governments recently. The U.S. Department of State, for example, eventually announced a visa restriction for 14 Iranian officials, 13 of whom had been designated as so-called diplomats, for their part in the alleged assassination of Dr. Kazem Rajavi.

The U.S. Department of State announced visa restrictions for 14 Iranian individuals for their involvement in gross violations of human rights on behalf of the Iranian regime. #Iran#VictimsofTerrorismhttps://t.co/8dJYR8lxQW

Dr. Rajavi was the first Iranian ambassador to the U.N. after the Iranian revolution in 1979, the brother of one of the NCRI’s founders, Massoud Rajavi, and a distinguished human rights defender and jurist based in Switzerland representing the NCRI.

Dr. Rajavi’s assassination was the tip of the iceberg when it came to the Iranian regime’s history of oppression of anyone thought to be a threat to the regime. Dr. Rajavi was the subject of a fatwa issued by Ayatollah Khomeini early on, but despite the threat of assassination, he tirelessly worked to expose the human rights record of the regime in the U.N. He was finally assassinated in April 1990 by agents of the Iranian Ministry of Intelligence and Security near his home in Geneva.

His assassination followed an earlier assassination of the leader of the Iranian Kurdish Group, the KDPI, Abdul Rahman Ghassemlou. He was assassinated by regime terrorists in Vienna in 1989. A botched response by Austrian authorities allowed the murderers of Ghassemlou to return to Tehran to a heroes’ welcome by the regime.

Today @SecPompeo announced designations including 13 operatives involved in the brutal 1990 assassination carried out in Switzerland on behalf of the Iranian Regime. The U.S. will not stand for the Iranian regime’s terrorism at home and abroad. https://t.co/BcISbYVeAN

It was Hassan Rafsanjani, an Iranian president who the west welcomed as a ‘moderate’ who was the architect of the policy of assassinating any Iranian who was considered a threat to the regime.

The regime terrorists who were involved in the assassination of Dr. Rajavi were identified by the Iranian Resistance (PMOI / MEK Iran). Full details of their identity and their mission were handed over to Swiss authorities but they refused to act, worried about the possibility of further terrorism on Swiss soil. A Swiss judge said at the time “we do not want to put our hands in the snake’s nest.” Dr. Rajavi’s file was finally closed by the Prosecutor for Vaud Province in Switzerland in June 2020, citing the Swiss statute of limitations. The case was reopened after objections by the Iranian Resistance.

Two of Dr. Rajavi’s murderers were caught in France in1992 but were extradited to Iran by the French Government in an act of appeasement by Jacques Chirac’s government.

Acts of terrorism continued on European soil for years to come because the mullahs believed they could get away with whatever they did because of the policy of European appeasement and concession. In a rare exception, a German court ordered the arrest of Ali Fallahian, the Iranian intelligence minister, for arranging the assassination of Kurdish activists in a Berlin restaurant in 199w.

The People’s Mojahedin Organization of Iran (PMOI / MEK Iran) and the NCRI, the main Iranian opposition, have continued to publicize the terrorist activities of the Iranian regime. These revelations have slowly managed to convince international authorities of the true intentions of the regime, including its nuclear ambitions.

One of the latest assassination attempts, fortunately, this time unsuccessful, was the attempted assassination of NCRI leaders at the Free Iran Summit in 2018 near Paris. A fake diplomat to Vienna, Assadollah Assadi, was caught by German authorities together with accomplices and handed over to Belgian police. His trial is ongoing in Belgium. This is the first time that an Iranian diplomat has been tried for terrorism in Europe.

This step towards accountability by international authorities has led to the recent designation of the 13 diplomats involved in Dr. Rajavi’s assassination as terrorists by the U.S. This helps to bring some closure to the still-grieving families of Dr. Rajavi but the Iranian Resistance just sees it as one of the first steps in what is likely to be a long road to seeing justice done.

The @StateDept blacklisting of 13 murderers of Prof. #KazemRajavi, the great martyr for #HumanRights, is an essential and effective step in the fight against #terrorism, contributing to European countries’ security.

As Mrs. Maryam Rajavi, the president-elect of the NCRI has said, this designation must be followed up by the prosecution of those who were involved in organizing Dr. Rajavi’s assassination. That includes Ali Khamenei, Iran’s Supreme Leader, himself, Ali Fallahian and Ali Akbar Velayati, who were the Ministers of Intelligence and Foreign Affairs at the time of the assassination as well as the current Iranian President, Hassan Rouhani, who was then the Secretary of the Supreme National Security Council.