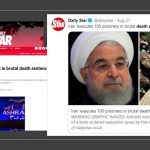 Written by Mohsen Aboutalebi on August 23, 2020. Posted in MEK (PMOI) IN MEDIA 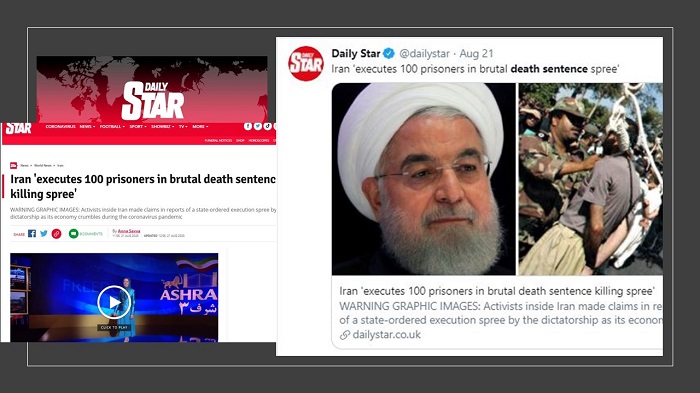 The British Daily Star newspaper reported today on the state ordered executions of 100 individuals in Iran that have taken place so far this year. These figures were revealed by activists who are opposed to the regime and it comes when the dictatorship is reeling from the disastrous state of the economy that has been fueled by COVID-19.

The National Council of Resistance in Iran (NCRI) and the Mujahedin-e Khalk (MEK) when speaking out about the importance of an UN-lead investigation claim that Iran has the ‘’world’s  highest execution rate.’’ Many of the victims have been women and political prisoners who have been hanged after orders from “the Iranian regime’s judiciary.’’

One of those executed was Morteza Jamali, who was the father of two children but was executed for just drinking alcohol on July 10th under Sharia law. He had been arrested several times from 2007 to 2018 and had been punished, but his final penalty was execution.

Responding to this, one activist said, “officials executed a man for drinking alcohol, what is the sentence for those who are drinking the people’s blood for forty and some years?”

Iranian Professor, Ivan Sascha Sheehan, said now is the time for U.S. officials to push for a U.N. led investigation into these atrocities committed by the regime. These deaths were ordered by Iran’s judiciary with many taking place in a single day. It is not just executions but forced limb amputations are taking place as punishments as well. Just before Ramadhan on 19th April, at least 7 prisoners were killed, while in Rajai Shahr Prison of Karaj.

While nothing is done to prevent further human rights breaches, several prisoners might be executed soon while some political prisoners afraid of contracting COVID-19 are trying to escape prisons around the country. So far, according to the main Iranian opposition movement, the Mujahedin-e Khalq (PMOI / MEK Iran), up to 10th August, COVID-19 had amassed a death toll in excess of 86,200 in 373 cities throughout Iran.

"Executions, Means to the Mullahs’ Survival"

"Call on UN for the 1988 Massacre Accountability"#Iran#1988Massacre#NoImpunity4Mullahshttps://t.co/hyGcT0TOq5

Other executions and punishments of political prisoners that have taken place include the following:

Iranian dissidents who were lucky to escape to Britain when they could claim that at least 30,000 victims have been killed at the hands of the regime and that prison death camps still existed in the country.

A Foreign and Commonwealth Office spokesperson for the British Embassy in Iran said: “The British Government is firmly opposed to the death penalty in all circumstances and in every country as a matter of principle.”

Maryam Rajavi, the president-elect of the NCRI and a long-term member of the (PMOI / MEK Iran), the main opposition movement, pleaded with the UN Security Council and Council of Human Rights to stop any more killings of Iranian political prisoners in Iran. She emphasized that “an international fact-finding delegation” should be sent to Iran immediately to visit Iranian prisons and political prisoners.