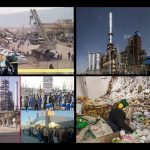 Written by Esmail Mohades on August 19, 2020. Posted in NEWS 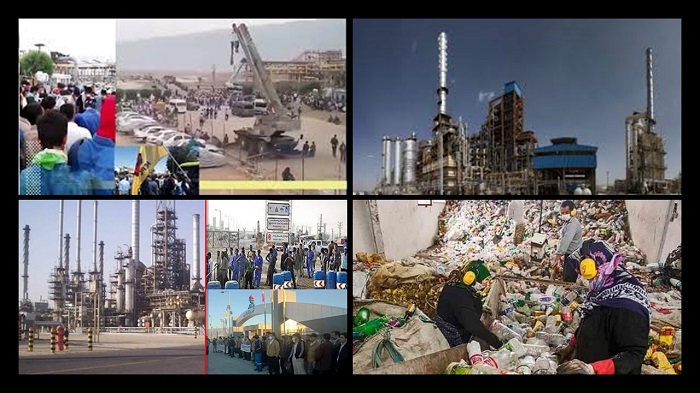 MEK: Tens of thousands of people working in Iranian oil and petrochemical industries and power plants are striking.

Wednesday marked the 19th consecutive day of protests and strikes for Iran’s energy workers. Tens of thousands of people working in Iranian oil and petrochemical industries and power plants are striking in protest of delayed paychecks, unresolved employment status, expired medical benefits, and privatization. They are also seeking the reinstatement of their fired colleagues.

A large number of holdouts joined the strike on Sunday, forcing the closure of the Mahshahr branch of the Tehran Jonoob Company and providing additional leverage to the striking workers.

HEPCO workers in Arak continued their strike on Tuesday for the 19th consecutive day. The MEK previously reported on the HEPCO strike, which began on August 1 in protest of delayed wages and uncertain employment status.

According to the protesters, provincial officials have promised to pay the workers’ delayed wages, but the officials have yet to follow through. On Monday, a representative of the workers said, “The CEO of the company is still ignoring our demands and has not returned to the company so far.”

Workers on Phase 14 of the South Pars natural gas initiative are still on strike after the Payandan contracting company failed to adequately meet their demands. The contractor paid their delayed wages through the end of July, and most of the company’s managers agreed to increase workers’ salaries to 20 million rials (approximately $475 USD) per month. The striking workers rejected this proposal.

Iranian companies are notorious for not following through on promises made during strikes, so workers are wary about ending a strike without having concrete gains. The MEK supports the rights of workers.

#Iran: About 200 of Derakhshandeh contract workers of the Parsian Mehr refinery in the city of Mohr went on strike on August 17. In this way, half of the work of the site, which is closed. #IranWorker #IranProtests pic.twitter.com/sWeXHyu1Pl

On Monday, approximately 200 oil refinery workers employed by the Derakhshandeh contract company at the Parsian Mehr refinery in Mohr, Fars Province went on strike. Company officials were forced to close half of the site as a result of the strike.

The Javar contracting company is attempting to break the strike at its site by increasing some workers’ salaries to 20 million rials. It has also brought in workers from other areas to replace the striking workers. These desperate workers are willing to work for lower wages.

Some of the workers at the Mir Hosseini Pumping Station of Zolal #Iran Company gathered on August 17, to protest the non-payment of their arrears for several months. #IranWorker #IranProtests pic.twitter.com/iKTDvfxdlg

On Monday, staffers at Zolal Iran Company’s Mir Hosseini Pumping Station protested the delay of their paychecks. The protesters said the company has failed to pay their wages or social security premiums for six months, leaving them in dire financial straits. Many employees at the pumping station are renters and cannot afford to pay for basic necessities because of the loss of their wages.

#Iran: The protest rally of the workers of the Safireh waste site in Ahvaz was held for the second time in protest of the lack of care and the unfavorable living conditions and uncertainty. #IranWorker #IranProtests pic.twitter.com/u9UMnBrQCA

Workers at the Safireh waste site in Ahvaz have been on strike since August 12 in protest of delayed paychecks, unpaid insurance premiums, and uncertain job status. The workers have gathered in front of the municipal building in Ahvaz each day to make their voices heard.

According to one of the protesters, a new contractor is chosen each year, leading to delays in their paychecks. The workers have not received their wages since March of this year.

The same protester added that Iranian labor law states that the workers’ wages should be increased to 25 million rials (approximately $594 USD). The contractor has refused to do so, claiming that he can only afford to pay 20 million rials. He has yet to pay workers anything at all, and he has failed to pay their health insurance premiums for the last four months. Meanwhile, the workers have been forced to work without pay or benefits through a pandemic.

Mrs. Maryam Rajavi the President-elect of the National Council of Resistance of Iran’s (NCRI): The workers who are on strike, the nurses, teachers, educators, and retirees who hold protests, and courageous women and youth of Iran have risen up for freedom and their most basic rights.

The workers who are on strike, the nurses, teachers, educators, and retirees who hold protests, and courageous women and youth of #Iran have risen up for freedom and their most basic rights #FreeIran2020 pic.twitter.com/yzrE4ABfyc